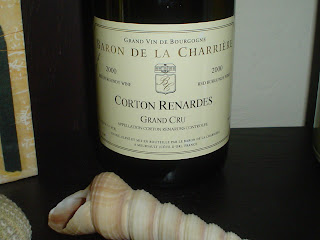 It's been a while since I've opened one of my precious bottles of Burgundian pinot noir to continue my novice exploration of the region and its wines. Burgundy makes me anxious--and one of this year's wine resolutions was to start learning about the wines so that I don't break into a cold sweat whenever I see one in the store.

So far I've been drinking wines from a single maker (Vincent Girardin, bottled under the "Baron de la Charriere" label for the European market) and a single vintage (2000). I bought my Burgundies back in January from Chronicle Wine Cellar, and have so far opened the Volnay (which taught me a lot about how balanced Burgundy can be) and the Nuits St. Georges (which was all about how a wine could develop and change from one glass to the next). Tonight it was time to venture into the region achored by the French commune of Aloxe-Corton in the Cote de Beaune. Known for its whites (Corton-Charlemagne) as well as its reds (the Corton Grand Crus), this wine comes from the subdivision of Corton Renardes.

As with all of my previous adventures in Burgundy, the 2000 Baron de la Charrière Corton Renardes was a simply amazing pinot noir (Chronicle Wine Cellar, $24.95; Rosso Wine Shop, $39.99). What stood out about this wine was its persistence. This wine had the longest finish imaginable, but the real charm of it was the way in which the aromas stuck with you from the first sniffs to the last whisper in your mouth. It was a beautiful dark ruby in color, just like a ripe cherry. When I first opened the bottle, I was greeted by sour cherry and blackberry fruit aromas laced with a hint of stone and mineral. The flavors involved layer after layer of cherry, black cherry, and sour cherry along with a bit of gamy meatiness that gave the wine complexity and interest. After you swallowed, your mouth continued to sing with creamy sour cherry, white pepper, leather, and chocolate.

As I know next to nothing about red Burgundies, I'm reluctant to make any kind of grand pronouncements about this wine other than these. For $24. 95, this represented excellent QPR. If I had paid $40, I would still not feel ripped off in the slightest. Burgundy makes great, thoughtful pinot noirs and I can see why some people are obsessed with them. Every bottle I drink is a revelation, and every bottle I drink makes me want to buy more. Happily I have another bottle of this, which I plan to open next year so that I can see what another year of age does for it.

It's pretty hard to imagine this wine getting better, but check back next July and see.

I always feel like I am walking on eggshells around Burgundy. They are a revelation, when they go right, otherwise they are an exercise in expletives. I am stuck in USA this month, but maybe I'll move over to Burgundy later this year...

I hear you. That's exactly why I was determined to drink a few bottles of Burgundy and when the Chronicle got in these Girardin offerings this past winter, I knew it was the best chance I was going to get to have some from a good producer at a fraction of their usual cost. I think for me Burgundy will remain in the "opportunistic" buying category. It's just too expensive and, as you say, too unpredictable. Especially on the west coast!

haha I guess $25 from Burgundy is sorta like under $20 from the rest of the world...

We're MOSTLY under $20 here, Dr. Vino! And I think it's more about pinot noir than Burgundy--my latest post on value pinots had 1 selection that you just MIGHT be able to get for $18. However, look at how cheap good merlot is these days...