Your Very Own Barrel of Wine

A few months back in my weekly column Serious Grape, I was 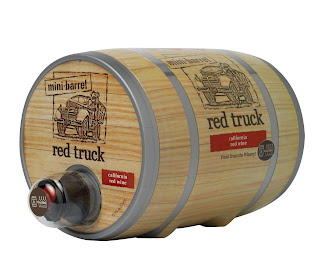 lamenting the fact that nobody was exploring the use of barrels as a way to reduce wine's carbon footprint. Lots of explanations were given as to why we don't go back to the barrels--from storage space to licensing laws. None of them struck me as insurmountable.

Happily, the folks at Red Truck Wines have decided to see just how far they can push alternative packing forward--by going back to barrels. This makes huge sense to me. And hopefully it will to you, too.

For just $29.99 (suggested retail), you will soon be able to get your very own barrel of 2007 Red Truck Red Wine, a blend of Syrah, Petite Sirah, Cabernet Franc, and Merlot. I haven't had the 2007 (yet) but previous vintages have struck me as the perfect, easy-going, fruit-forward house red. The mini-barrel, as they call it, holds the equivalent of four 750ml bottles of wine. I'm not a math whiz, but I think that works out to $7.50 a bottle. There is a tap on the side that keeps air out of the wine and the barrel is equipped with a special gizmo that means you don't have to tilt the barrel to get the last of the wine out of it. And it even has little feet, so it will sit on your cool, dark counter without rolling around. How long will the wine stay fresh? The winery says 40 days--a claim I'm eager to put to the test (although I doubt the wine will last that long).

The mini-barrels will debut this month in Sam's Club stores, and be available through other retailers within the year.

Who's headed straight to Sam's Club with me?
Posted by Dr. Debs at 5:30 AM

Email ThisBlogThis!Share to TwitterShare to FacebookShare to Pinterest
Labels: cabernet franc, merlot, petite sirah, syrah, wine and the environment, wine under $10, wine under $15, wine under $20

These would have to be seriously small barrels. I wouldn't be buying this personally, flat is too small for one :p

Plus we never finish a bottle in this house before moving onto the next. I'll just have to suffice with ticking the "offset carbon footprint box" on the airline websites.

Great idea. I'd like to see more good wine in alternative packaging.

This is also great for small restaurants that want to offer a decent selection of wine by the glass.

I love the packaging and concept.
Anything that helps get more wine on more Americans dinner table is a winner to me.
Now if someone will open up a bulk wine shop (like baron Rouge in Paris) wher we can come in with our own bottles and fill them up for our week's drinking needs....

I love this idea, I think many people, myself included, will want one of these mini barrels even if its just for the novelty factor. Great idea!

This guy cracks me up! You can't tell the barrel is not made of wood and that the inside liner is showing. I bet that the liner in the barrel is 10 x's worse than glass bottles that are more easily recycled. I guess whatever makes you feel good. So much of this earth stuff is worse than normal life.

We love this wine....this is our everyday wine, and we have already gone through 5 barrels...Delicious and easy to drink....no hangover.

Red Truck Winery Mini-Barrel is for those people who cannot stop taking peg after peg of their favourite drink. Not much of a peg, but glasses of wine, if you ask me. You would no longer need to carry a bottle or a box to store your wine and carry it around, and you could simply carry the Red Truck Winery Mini-Barrel when you want to serve your guests or friends with some amazing dry or red wine.

Does the individual plastic "barrel" have a date of bottling imprinted on it anywhere? It seems there would be a very real possibility of inadvertently getting one filled more than a year earlier, and having it be almost completely oxidised.

I love this idea! The carbon footprint of wine shipped in glass bottles is just too big to ignore!