Because today marks the official beginning of the 13 Days of Halloween (don’t worry if you’ve never heard it before because I came up with this holiday concept myself), I’m here to come clean and explain why posting on GWU$20 has been sporadic and what it all has to do with witches, vampires, and wine.

In the fall of 2008, my life took an unexpected turn. Regular readers of the blog noticed a steep decline in posts. In January and May 2010, there were no posts at all. “What’s up?” many asked in the comments and by email. At the time, I didn’t want to say. That’s because the answer was unbelievable: I wrote a novel—and Viking Press is publishing it. 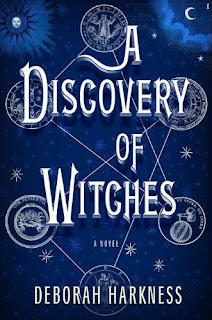 My first non-fiction book was about 16th-century chemistry, alchemy, and magic. Unless you are completely cut off from all popular culture, you know that there has been a lot of recent interest in witches, vampires, and other things that go bump in the night. Our modern fascination with these premodern topics intrigued me.

So I started spinning a tale that imagined our world was populated by all kinds of strange and wonderful creatures that human beings refuse to recognize thanks to our awesome powers of denial. These creatures include daemons (creative, destructive types), witches (who can tap into supernatural knowledge), and vampires (who are not immortal, though they live for a long time). What do they do for a living, I wondered? One question led to another (where do they hang out? who do they hang out with? what problems do they have?).

The result is A Discovery of Witches which will be released on February 8, 2011. At the center of the story is Diana Bishop, a modern, fictional descendant of the first woman executed for witchcraft in Salem way back in 1692. Diana is a historian of alchemy, who finds a lost alchemical manuscript at Oxford’s Bodleian Library and meets a mysterious geneticist named Matthew Clairmont. Matthew is a very old, French vampire and now puts his considerable energy into an occupation that rewards long-term thinking. And, along with the rest of his kind, he has a decided taste for wine.

Vampires may need blood to survive, just as humans need water, but it’s not all they drink. Wine is always changing, never the same, and drinking it helps vampires endure years and years of same-old, same-old. Imagine what they’ve been able to lay down in their cellars over the centuries, not to mention how much fun it is to befriend such a creature. When I was writing the book, I researched the world’s most collectible and historically important wine—something that expanded my wine knowledge dramatically. If you want a peek at some of the treasures in Matthew’s cellar, click here. And no, I haven’t tasted any of those bottles. If you have some you want to share, do let me know.

It is not surprising, perhaps, that a historian and oenophile like me couldn’t resist the idea of a long-lived French vampire with an excellent palate who knew both the biologist Charles Darwin AND the alchemist Nicholas Flamel. If you are so inclined, you can friend the fiction-writer me on Facebook (no wine, just writing), follow me on Twitter (fiction, wine, food, music, and rambling nonsense most days), and of course keep reading here (just wine!). And if you want to find out more about the book, read an excerpt, sign up for updates, or generally procrastinate, head to my website: http://deborahharkness.com.

Thanks to all of you who keep tuning in here and for your continued patience when I'm not blogging. Now you know that those silences indicate that I'm not only thinking about wine, but about witches and vampires, too.
Posted by Dr. Debs at 5:30 AM

As it turns out, I happen to be a huge fantasy buff -- I saw the videos from the NY panel where you were on with Brandon Sanderson (The Way of Kings = WOW!) and Peter V. Brett, but despite that name ringing several bells, I didn't manage to put the 2 and 2 together until this post.

Yours in wine and fantasy,
Loweeel

Thanks for your good wishes and support. Loweel, it was amazing to sit up there with those authors (all of whom have such dedicated fans, and deservedly so).

Congratulations! So exciting. I'm not really into vampires and such but want to read it just because you wrote it. Best of luck!

Congratulations! This sounds right up my alley; I cannot wait to read it.

Thanks Kori and Farley. Kori, you may discover my vampire isn't like the others. And Farley, I look forward to hearing what you think.