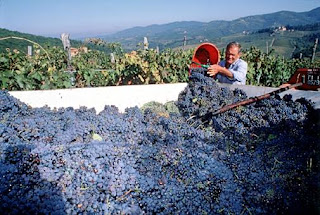 A flurry of news reports the past few weeks have suggested that grape vines throughout the world are beginning to feel the effects of global warming. (image from ItalianVisits.com)

In France's Beaujolais region the harvest of gamay grapes began 2 weeks earlier than usual, something that veteran winemaker Georges Duboeuf remembers happening only a handful of times in his life. In 1947, 1976, 2000, 2003, and now in 2007 the harvest came in early. What he doesn't say is that three of those harvests have been within the last decade, which I find a bit alarming. Despite the early harvest, there are no plans to change the release date for beaujolais nouveau, which is still planned for the third Thursday in November.

In Sicily, the Veneto, and Lazio there are similarly early harvests this year, with grapes being picked as many as four weeks earlier than usual. This had led to problems securing workers for harvest, and to changes in long-established traditions like harvest festivals that typically take place in October--not September.

Harvests are always idiosyncratic and quirky, and 2007 will be no different. Bordeaux has been worrying about rain, not heat, for instance. And Napa has had few of the high temperature spikes that can lead to uneven ripening of the grapes. But this rise in temperatures across Europe does have viticulturalists worrying about the long-term effects this may have on wine production. Entirely new varieties may need to be planted to cope with the climate change. And the higher heat is producing fruitier wines which will only contribute to the trend towards "international" fruit forward styles. I don't know about you, but this is not a trend I applaud. I like wines to taste different, and to reflect the conditions under which the grapes were grown and made.

I've always thought whether and how much to let fruit ripen on the vine was a decision of the winemaker. Now we see that Mother Nature has a role in the decision process, too, and if global warming continues, we may all be in for a far fruitier future than we thought.

Post-Script, 8/31/07: The San Francisco Chronicle's Lynne Charr Bennett reported on the earlier harvests taking place all over California this morning, adding coverage on Lake County, Monterey, and San Luis Obispo along with other viticultural areas.
Posted by Dr. Debs at 9:30 AM

Ironic how global warming brings varied outcomes. Here in Spain many producers are expecting longer than usual growing seasons. Much of the country has been cooler than normal. All this after a stretch of hotter than normal vintages the past 5 years. Very strange. Also hard to explain at times, when we humans look season to season, but climate change is a cumulative problem!

It is really strange, I agree. We had a cooler than normal summer in southern Cal, a warmer than normal in northern Cal. What worried me most was the cluster of three of those early vintages in 7 years. That seems like a worrying trend to me.