Welcome to My Windowseat 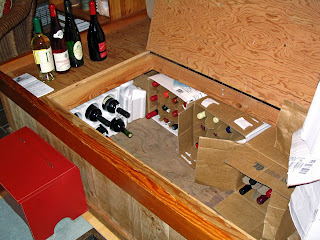 Wine storage is always a problem, as any dedicated oenophile knows. Know matter how small your collection, or how big your house, there never seems to be enough space to stash all of your wines in cool, dark comfort until you're ready to drink them.

In previous posts on cellaring wine I mentioned that I have a passive cellar in the north-east facing windowseat of a house on the Sonoma Coast. I had a wine-loving friend to lunch one July and he came into my chilly house tucked into the redwoods and said, "Ideal cellar conditions." I emptied out a windowseat, and refilled it with empty wine boxes, styrofoam wine silos, and six-bottle carriers from winery visits. Then I filled up all the holes with wine. It's not elegant, as the picture shows, but it works.

This summer, I've had a chance to pull some wine out of that windowseat and drink it and every bottle has been in perfect condition. I have been reminded that I really, really like older cabernet. Not old, but older. Like the 2001 Three Saints Cabernet Sauvignon from Santa Barbara County. I can't find a single bottle of this wine anywhere, and I was sorry I had only one bottle. I bought it last year as a bin end for $12.50, tucked it away and forgot about it. Nine or ten months later, it is a testament to how beneficial even short-term cellaring can be, if the conditions are right.

When I opened it I discovered that it was a beautiful example of a California cabernet. It had a dark, inky purple color to it and aromas of blackberry, plum, espresso--and cedar, the unmistakable smell to my nose of a cabernet with bottle age. A cascade of blackberry, grilled herb, and dark chocolate were a prelude to the lingering aftertaste that was accented by cinnamon and spice. It was drinking pretty well for a wine that it still within its recommended drinking range, and while it may keep improving for another year or two I was glad that I had it in its "middle age."
Posted by Dr. Debs at 10:25 AM

I gave up my "ice chest in the clothes closet" storage for a 30 bottle wine refrigerator in July. It's not full, but I'm inspired to devote a row to aging some Cabernet. I have never had an old Cabernet like you describe and it sounds great!

Living here in Spain, we have no good home for old bottles. My cellar back in Minnesota is full and to tell the truth, tasting those mature gems, is the best reason to visit! Maybe our new apartment will have a hole somewhere we can stash a few bottles. I'm with you Cab and many other red's, not to mention whites, benefit from a bit of bottle age.

We are very happy that our new home has a full, dry basement. Perhaps someday we will finish it out, but for now, it stays at a nice 62-65 and the wine gets little to no light, except when I go down to root out a bottle. Much better than a window open all winter long to keep the temperature in our apartment at even okay levels.

Hola, Dr. Debs! That's a nice passive cellar you have. It would be nice to have such a thing in So Cal, also, but not with our crazy hot summer. I came home today and the temperature inside my "Emerson Suites" wine units was 58.6 degrees - not bad considering the ambient room temp was 87 degrees! Good thing I don't store wine under the bed anymore, lol..

I started with using a closet, then moved to a small wine refrigerator that held 16 bottles. Then added a second, little larger wine refrigerator. And last year moved up to a large Vinotemp that holds 260 bottles. It was expensive but worth it for me.

I think storage woes and solutions are one of the most popular topics among wine lovers. Fridges are great--I have one in LA that holds 52 bottles because that's the biggest the house would accommodate--but I'm finding that passive works too, at least here at this house. I would kill for a basement, Sonadora, which is not standard issue on the east coast.

And Orion Slayer, even a middle-aged cab has an interesting story to tell once you drink it. Ryan is right, they benefit so much from even a bit of bottle age. Maybe even 1/2 a row would be worth it!

What a wonderful idea! Space where I live is really at a minimum so I think I need to get creative also! Too Cool!

I have a question - maybe I missed the boat somewhere, which I often do, but do you know what happened to the round up for the past WBW#36?

Deb, be creative, but remember ambient temperatures. The ambient temp in this house has never, ever been over 71. I kept track for almost a year with a digital thermometer. It's very hard to keep a passive cellar that isn't in a basement if your wine is going to be subjected to higher ambient temps. And Lenn hurt his back so there's no WBW #36 roundup as yet, but I expect it will come out over the weekend or early next week.