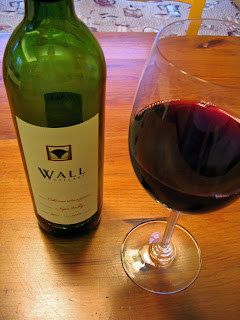 We're barely into fall, but I am finding myself drawn to reds in a big way these days. Cabernets, merlots, gamays--you name it, I'm drinking it as the days become shorter and the nights cooler. I also find myself pouring over soup recipes and looking for new ways to make stews, in my free-fall into autumn.

Eric Asimov and his tasting panel friends supplied us with a nice list of red wines under $10 recently, and I wanted to add to the list for those of you who are still looking for good value red picks. One is under $10, one slightly over, but both are worth seeking out if you like classic reds. Even better, they represent an interesting excursion into Old World/New World red wine styles.

The first red pick I have for you is the 2005 Wall Cellars Cabernet Sauvignon from the Napa Valley. (I received this wine as a sample from domaine547, but you can get a bottle for just $13.99. If you buy it this week, it's only $11.89 according to the website). If you don't think you can possibly drink an excellent Napa cabernet for less than $40, think again. This wine had almost textbook varietal characteristics from its dark garnet color to its aromas of blackberry, black cherry, smoke, and a touch of green pepper. Flavors of black cherry and grilled herbs made this wine lively and fresh. Smooth tannins led to a peppery bite as you swallowed the wine, which left a pleasant, lingering aftertaste of herbs, berries, and spice. This was excellent QPR, considering the wine's complexity and its price tag. It was not as huge as many Napa cabernets, but in my opinion it was all the better for its restraint and its interesting mix of flavors. It reminded me much more of an Old World cabernet, than a New World cabernet. 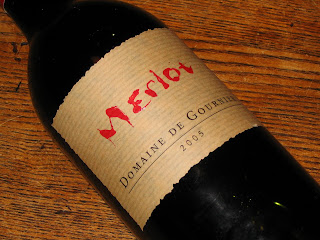 comes from an appellation within the Rhone. (another sample from domaine547, available for $9.99). The Rhone is better known syrah and grenache, but this wine is proof that merlot can do very well there, too. This pleasant merlot was made from a merlot clone that is also planted at Chateau Petrus in Bordeaux. It had muted plum and mineral aromas that set the stage for flavors of dark plum and black cherry. Caramel and toast notes emerged as you held the wine in your mouth, along with some dusty tannins. We've gotten pretty jaded about merlot, what with the 90s and then Sideways, but they are awfully good food wines and this one is no exception. It was just as brilliant with arroz con pollo as it was with sausages and burgers cooked on the grill. This is a very nice and affordable example of an old world merlot that is a bit fruitier than most Old World merlots, but less jammy and velvety than those from the New World, and it also represented excellent QPR.

If you're hankering after some more fall wine to drink now and lay down for the rest of the winter, you should consider these two options. They are so interesting, and so easy to pair with food, that they would make good "house red" candidates. Normally, I would hesitate to suggest a cabernet for this role, but in this case both it--and the merlot--would go with so many fall and winter dishes that I can put my normal cautions aside.

dammit, Eric Asimov's link is more popular than mine!...

okay, I'll stop being petulant. Thanks for the mention. Happy you liked our wines and gave us your high "Excellent QPR" rating!

Check out their other non-varietal red and rosé blends if you get the chance!

Jill, you're welcome. They were good, good wines. Marcus, I've never seen the Gournier outside of domaine547, so it's good to know that they are a buy across the board. Will keep my eyes peeled. And thanks for the Wine Exchange tip, rougeandblanc. I like tempranillo, and am always looking for recommendations!

Were you pouring wine over soup recipes, or were you simply looking (poring) through them?

Why, both of course! As you can imagine, it was very messy!

Just tried the Wall cellars Zin. A big wow for $11. Bought all I could!! Never saw this producer b4. I look forward to trying more of their wines