Wine Identity Theft: When One Wine Drinks Like Another

Here at GWU$20 I use varietal characteristics to evaluate wine. I want my cabs to taste like cabs, and my chardonnay to taste like chardonnay. Drinking a wine that says it's one thing on the bottle, and then tastes like something else, seems like wine identity theft. It can also make it impossible to evaluate the wine's quality-to-price ratio on a consistent basis. The market price for cabernet and gamay are different; so if I have a cab that drinks like a gamay, and paid $18 for it--well, I am not happy. If I wanted gamay, I'd buy it for $13 and enjoy every drop. I've had a run of wines that were made from one grape, but drank like wines made from another. Is it wine identity theft, or is something more complicated going on?

The first was a 2005 Eaglepoint Ranch Grenache ($15 from most merchants) that came from the cool Anderson Valley in Mendocino County. This smelled 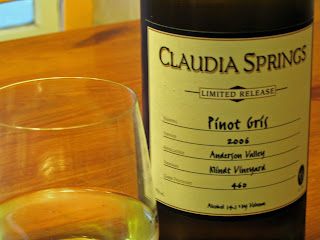 exactly like grenache, but it tasted like a gamay wine from the Beaujolais. Aromas of herbs, plums, and blackberries started things off, which are some of the aromas I associate with grenache, along with a floral note. The flavors were much lighter, however, with strawberry at the core of its flavors, and some mineral freshness as well. I really liked this wine because it was a nice, light red. But if you pick a bottle up at the wine store, I'd recommend treating it as you would a beaujolais, not a French grenache.

The second wine that seemed like a victim of identity theft was the 2006 Claudia Springs Pinot Gris Klindt Vineyard ($17). Pinot Gris is known for its apple and lemon flavors, and I always associate the wine with crispness and a bit of round vanilla from the time that it sees in oak. This wine was pale straw in color, and had very muted aromas of apples, apricots, and cream. Apricot and apple dominated the flavors, and as you swallowed the last drops you tasted even more butter and cream. This was a pinot gris that would appeal to chardonnay lovers. It may be that the juice underwent malolactic fermentation which is not common for pinot gris. This would account for the creaminess in the flavors and aromas, but I couldn't find out for sure if this was the case or not. 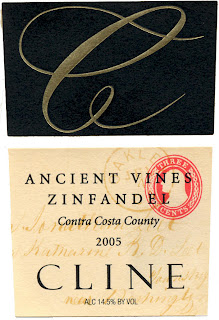 My third case of wine identity theft was the 2005 Cline Vineyards Ancient Vines Zinfandel (between $11 and $20). A bright ruby-red zinfandel, this had lots of herbal aromas up front and not much fruit. Flavors of herbs and minerals put the blackberry fruit flavors that were present as well into a secondary role in this wine. It had a tangy, herbal finish that reminded me of a cabernet franc. We didn't drink the whole bottle the first day, and it actually seemed a little more fruity and peppery, and therefore more characteristic of the varietal, on the second day. This made me wonder if the wine needed some more time in the bottle to really shine.

While these wines were hard to evaluate from a QPR standpoint, I enjoyed drinking each of them--as long as I covered up the label! There was nothing wrong or flawed with the wines. I was just surprised at the way that they tasted.

But there may be reasons for the flavors that these wines exhibited. The grenache was grown in an unusual place: the relatively cold climate of the Anderson Valley. Grenache is most often associated with the south of France. Perhaps that accounted in part for its Beaujolais-like qualities? The second wine may have gone through an unusual fermentation process for the grape, which made it creamier than most pinot gris. And the zinfandel might have been too young to really strut its stuff.

Before you call out the wine police for your next case of wine identity theft, consider the unique growing, winemaking, and aging needs of your wine. Varietal characteristics are an important part of the story--but they aren't the whole story. And sometimes a wine identity thief can be a pleasant surprise.

We were actually discussing this very idea last week at my tasting/study group. Several people are planning to take the sommelier certification, and it can be really hard to identify an Argentinian Syrah made in the Rhone style or a Pinot Noir grown in the Santa Cruz Mts. that's bigger and brasher than some Cabs.

I also mentioned how Jancis said she was glad that she took her Master of Wine exam when wines were made more like themselves than something else. Lucky her.

Then again, it can be fun when it's not on some test!

I don't consider myself expert enough to blindly identify varietals, but I had a Bordeaux the other day -- Chateau German Cotes de Castillon 2001 -- that was more like a pinot noir than any pinot noir I've ever had, and I would have bet a substantial sum that's what I was drinking.

What's a budding wine geek to do!?!
Now when I taste a wine that's supposed to show me what a given varietal is like, I have to wonder if it really IS an example.

Actually, I'm pleased by the information in your post. I have something to aspire to! I have tasted several wines already and thought it tasted like a syrah or merlot.

Please continue to post cool articles like this one. I'm coming up on a year of wine learning and it looks like there is more fun in store!

Enjoyed your post and thought I'd let you know that Claudia Springs wants to sign up for WineQ once the holidays are over and they have time to explore new marketing avenues!

Great post... very interesting. I recently worked on a Pinot Gris that naturally went through MLF. Now, I could have stopped that from happening, but to do so I would have needed to make additions and manipulations that would have without any doubt diminished the quality of the wine. So, instead of the crispy, refreshing, Pinot Gris, we ended up with a smoother, higher body, Pinot Gris. As you probably know there is no wrong or right, but it would be incorrect to call my Pinot Gris a "Wine Identity Theft". At no time in the process was I looking to turn this Pinot Gris into a Chardonnay. I just simply let the wine finds its character on its own. However your point does raise a valid concern... would a customer who purchases this wine feel cheated? That's why I think back labels are so important to communicate to wine drinkers what they are about to purchase.

Great comments, folks. Hope they reassure Orion Slayer that nobody really knows what they are drinking all the time (not even Jancis Robinson!), but that the trial and error is part of the fun. More fun than the trial and error associated with becoming a sky-diving expert, I imagine!

Marco, your point is exactly what I tried to convey here--but you did it better! There is no "right" or "wrong," but a range of interpretations for each varietal. I thought I knew what that "range" was for Pinot Gris, but was pleasantly surprised to discover that some PG does go through malolactic.It's unusual but it does happen. That's why I said "before you call the identity theft police" you should try to figure out why the wine is tasting the way it is. And the label is, as you argue, crucial. Had I known ahead of time, I would have thought, "wow. Terrific! I get to try something new."

Great news about the Q and Claudia Springs, Marshall. I will be looking forward to trying more of their bottlings!

The fun lies in venturing out and trying wines and noting down the ones you liked. For wines of different types but similiar taste, i believe it lies to each and every individual as it is kind of a acquired taste imo

Dr. Debs, I've come across this a few times, and as a "Newbie" wine-lover, found "The Identity Theft" less disconcerting than the wine-snobs who pooh-pooh the realization, Stacy Slinkard being the big exception.
Here is an example from The NHWineman blog:
"This Chianti reminds me of the Michael-David Vineyards 2008 Petite Petit Syrah-Verdot ($16.99-$22.99, 87 points), yet the Carpineto Classico Reserva is smoother and better structured (Not to Knock California Petite syrah), but the floral character of this Petite Petit is remarkably similar and add the clove, cedar, and cinnamon, and there is a resemblance that probably makes me look foolish (Different grapes and the weird look the Vintner gave me). The Petite Petit has a weaker finish, but is about the same price."