I went out yesterday and got 2 bottles of Beaujolais Nouveau at my local Beverages & More wine supermarket. One was slightly more than $10, one slightly less. I decided to drink the better known 2007 Georges Duboeuf Beaujolais Nouveau ($11.99) with family in a few days. But I ordered takeout pizza and popped the cork on the other bottle after leaving it in the fridge for about an hour. 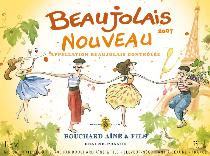 The wine was a 2007 Bouchard Aine et Fils Beaujolais Nouveau ($9.99). And it was a surprise. I went in expecting to scoff entirely at this wine, but found myself enjoying it more than any beaujolais nouveau I've had in quite a while. The wine was unexpectedly heavy for a new gamay, with a true cherry color. Aromas of strawberry and earth also appeared in the flavors, along with a note of cracked black pepper. There was a bit of an artificial banana aftertaste that was especially noticeable when the wine was just opened, but I found it blew off leaving me with something that was not too far off a normal inexpensive beaujolais. This wine was just great with takeout pizza, and it wouldn't be bad with turkey and all the fixings on your big day, or with leftovers in the days (and weeks) after that.

Is this a profound wine? A serious wine? A wine to lay down by the case? No.

Can you do better for under $10? Yes. QPR on this wine? Irrelevant. What are you going to compare it to? Previous beaujolais nouveau? With the dollar doing what it's doing?

If you are going to buy one of this year's beaujolais nouveau wines, drink it now. When you do, you will be participating in one of the world's silliest wine rituals--though I am deeply alarmed at the carbon footprint issue that goes along with this wine and may have to give up my yearly habit. And if you like it even a teensy little bit, do yourself a favor and drink a real gamay wine. They are superb!
Posted by Dr. Debs at 8:57 AM

It's so cool that you reviewed the Bouchard! I tasted it and the Fessy at BevMo yesterday. I ended up liking the Bouchard more than the Fessy, even though I bought the Fessy. I also bought a 2005 Ch de la Chaize Brouilly. I hope this is a better wine and a real Beaujolais. It would be nice to sample a good Gamay Noir wine.

Sounds interesting! I hope I can find it in this area.

I bought two bottles of the Georges Duboeuf Beaujolais Nouveau ($9.99) today. Will open one tonight.

I stayed away from the BNs this year mostly because I've been disappointed in the past. I don't claim to be much of a traditionalist, either, so I don't easily succumb to the yearly hype. The carbon footprint issue certainly tempered my decision, however, as did the bottle of Louis Jadot Beaujolais I reached for instead. Cheers!

Man...does this mean that I need to try come BN this year?

Probably not. I'm sure all of my local shops are stocked with Duboeuf, and that hasn't been any good in years, has it?

FYI, I just syndicated the xml feed of this blog on livejournal for my own ease of reading; might get you a couple other followers too. hope that's ok! if interested, you can see the feed at goodwineunder20.livejournal.com

Always like to know that someone's palate agrees with mine, Orion Slayer. Will be heading over to your blog to check out what you wrote about your anniversay BN! RichardA, I haven't opened up my GDB yet, but looking forward to trying it after reading your notes. Winhiker, how was that Jadot?

Like St. Paddy's, Halloween and New Year's eve, the nouveau is always about fun! One needn't join in...

Not a *real* Beaujolais, not for the serious, probably not even for comparing. Don't sip & sample, pour a couple of big goblets and swig!