I used to think I would love to live in Bordeaux. All those vineyards, the old chateaus, the sense of place--where could you possibly imagine living that could measure up to this ancient wine region?

Then I read Tim Elliott's selection for the second edition of the Wine Book Club: William Echikson's Noble Rot: A Bordeaux Wine Revolution.

Now I'm not so sure.

Echikson paints a portrait of politics and wine culture in the region that is poised somewhere between bitter family feud, hostile corporate takeover, and prolonged civil war. There are two things at stake in this struggle, no matter how you label it: money, lots of money; and a death match between advocates of traditional and more modern styles of wine making. Among traditionalists, the 1855 Bordeaux Classification is gospel, and pedigree matters. The modernists think Parker is king, employ consultant winemakers, use lots of oak, and pray on their knees for 90+ scores.

In the process of describing these relationships, he introduces us to some arresting characters who dot the Bordeaux landscape. Robert Parker, of course, appears and reappears as the story unfolds, tasting wine and setting futures prices that are based almost entirely on whether he pronounced the wine to be good, not so good, or 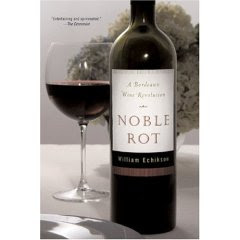 great. So, too, do great winemaking families such as the Lur-Saluces, who have been making wine for a very, very long time. Clan warfare so bitter as to make the Hatfields and the McCoys envious broke out between branches of this distinguished family. The feud started over who should control Chateau d'Yquem, the name of which is synonymous with the ambrosia-like Sauternes made from botrytized grapes that have shriveled due to the fungus known as "noble rot." Inter-generational strife, money, love affairs, broken marriages, back-room deals, shady legal documents--it's all there in the tale Echikson tells about life behind the chateau's walls. All I can say is this would make one hell of a TV series.

What I liked best about this book was the spotlight that it shone on aspects of Bordelaise wine culture that we either take for granted or never knew in the first place. I assumed, for instance, that Sauternes had always been fabulously expensive and prized. Not so. Thomas Jefferson ordered 250 bottles of the 1784 vintage of Chateau d'Yquem. Between 1968 and 1983, however, sales of Sauternes and other Bordeaux wines languished. I also assumed that Pennsylvania had the most Byzantine wine distribution system on the planet. Also not so. It's Bordeaux, with its middle-men, futures market, and allocations based on previous orders. Ever wonder why you see so much Bordeaux on shelves, even in bad years? Because if you don't order it consistently, you can loose your allocation entirely--which could prove deadly if you're a retailer.

Echikson's book will appeal to anyone who likes behind-the-scenes exposes or reality television. There is something gripping and haunting--like watching a train wreck--about watching a group of people engage in self-destructive behavior and bad decision making. You could call this book Survivor: Bordeaux and not be far from the mark. It's great beach reading, plane reading, corporate lunchroom reading, and hammock reading. If you've ever pulled the cork on a bottle of Bordeaux, or ever thought about doing so, you will find this book provides an engaging window into that rarified world.

Bordeaux will never be the same for me, now that I've read this book. Thanks to Tim Elliott of Winecast for serving as our host this month. If you're reading this and want to chime in on the discussion, check out the posts on other blogs, the Wine Book Club website, or one of our linked sites on Shelfari or Facebook. Next month's host will announce the title on May 6, and in the end of May/early June look for an inspirational post to keep you turning the pages on the new book club selection from Richard, the Passionate Foodie, about a book that touches on one of his areas of expertise.
Posted by Dr. Debs at 7:33 AM

Thanks for such a great review. It's giving me the motivation to read the book now -- something I didn't even attempt for this edition of the book club. Off to Amazon now...

Ditto. I'll be in need of some airplane/hammock reading material so thanks for the recommendation!

I hate that more people didn't read this one. I thought it was great: enjoyable and informative.

Ah, well. At least I finished, unlike last time.

It's ok. We're still in early innings on this wine book club idea, and as usual, people's resolve with respect to their resolutions always wanes. But it's a good book--very enjoyable, in a kind of shocking way.