Heading for the Italian Wine Frontier: Marche in May 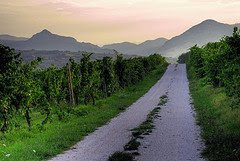 Italy's wine frontier is an area known as Le Marche. Pronounced mar-KAY, nearly everywhere in Europe has a place that has long been seen as a borderland, a place between. In Italy, Le Marche is that place, and it shares borders with the Republic of San Marino, four Italian regions (Emilia-Romagna, Umbria, Tuscany, and Abruzzo), and the Adriatic. (check out the map here) During the Renaissance, the region was constantly under siege from rival noble families who wanted to annex the territory to their own land holdings. (Strada tra la vigne by emorpi)

Today, Le Marche is known for its left-wing politics, its mountains, its beautiful stretch of coastline along the Adriatic, and beautifully preserved medieval architecture. Hikers and nature-lovers are drawn to the mix of mountains, low valleys, and beach-front strips of sand. This changing terrain invites long walks and provides awe-inspiring vistas. Tourism into the region is on the rise. (I colori dell'estate by emorpi)

As tourists flock to Le Marche, the region is also becoming better known for its wine. Wines from Le Marche, like this frontier region of Italy itself, are just being discovered by outsiders which 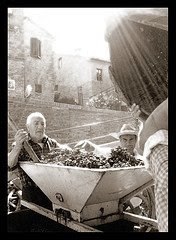 means that it is great bargain-hunting territory. A map of the region shows that wine is made throughout Le Marche, so there is a wide range of choices from crisp whites to rich reds. (fumi cotti by iorek byrnison)

This month I'll be focusing on wines from Le Marche as part of my ongoing efforts to get to know the wines of Italy. The region is best known outside Italy for its white wines (most notably Verdicchio dei Castelli di Jesi), but its reds are made from Sangiovese, Pinot Noir and Montepulciano d'Abruzzo so they are well worth seeking out as well if you like soft, food-friendly reds.

Stay tuned for reviews of several wines from the region over the next few weeks. They will all be perfect for summertime sipping whether they're refreshing whites or grill-friendly reds. If you have any recommendations for wines from Le Marche that you have enjoyed in the past, please let me know. Last month I received some great suggestions on what to drink from Molise. Keep those tips coming!
Posted by Dr. Debs at 7:33 AM

Co-incidently, we had a le Marche Verdicchio last night (#64/100). 2006 Conte Giovanni Baldeschi Baleani Verdicchio dei Castelli di Jesi Donna Ginevra. I bought it blindly, just seeking another varietal -- We were very surprised -- truly one of the most pleasant white wines I've had in a while -- very well balanced, fruity with great mouth feel. A little pricy at $17, but in the <$20 category and for me a great QPR. I'll look for it again for sure.
DRHamp

I can't wait to go down this path with you.

I look forward to learning about this region, it's new to me!

Thanks, everybody. This region hopping project is turning into a wonderful way to learn about a country's wine--wish I'd done it for Spain last year. Anton, welcome AND I got the Collestefano you recommended. Stay tuned!

Couldn't agree more with Anton's comments above. The Verdicchio di Matelica rarely disappoints. It's not easy to find outside of Italy, however. Its cugino from Jesi is the export powerhouse. If you spy a bottle, pick it up. On that note, I can also highly recommend other indigenous Marchigiani wines -- the "pecorino" grape (a fruity white from the Ascoli Piceno province, near Abruzzo) and the truly unique Lacrima di Morro d'Alba (a red with a powerful bouquet, light body and distinctive taste). They are both worth hunting around for as well. Easier to find in the red category is the rosso piceno and rosso conero.
Buona bevuta!

Bernhard--I found a Pecorino from Abruzzi. Thanks for the recommendation! Will have tasting notes shortly.