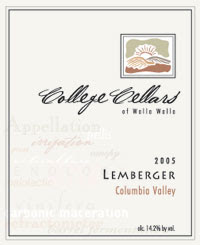 Lemberger is often the victim of mistaken identity. Tell people you are having some Lemberger and they are likely to ask you why you like smelly cheese. Sometimes, it's not called Lemberger at all, but Blaufrankisch.

As if the name thing isn't hard enough, it's hard to find, too. When you look on most wine store shelves you don't see a lot of Lemberger for sale. This is strange, because it basically tastes like a Merlot that took an unexpected turn and ended up somewhere in the neighborhood of the Beaujolais.

The 2005 College Cellars of Walla Walla Lemberger was a very good QPR wine. ($12.00, Wild Walla Walla Wine Woman) It was like a Merlot in its color--dark ruby-purple. There were nice aromas of cherries, spice, and perhaps even some roses. Initially there was a bit of funkiness and a very sharp acidity, but the wine opened up and mellowed out quickly into high-toned cherry and cranberry flavors. The wine was at its best with food. It's full-flavored but not heavy--and it's a great red wine for the summer' s grilled or BBQed food.

College Cellars of Walla Walla is the not-for-profit teaching winery attached to the Center for Enology and Viticutlure at Walla Walla Community College. Proceeds from the sale of their wine go to scholarships for WWCC students. I highly recommend contributing to this good cause and getting some good wine to boot.

And try a Lemberger if you get a chance. I mean the wine, of course, not the cheese.
Posted by Dr. Debs at 5:30 AM

Y'know, why not?? --might make an interesting pairing!
Would love to try this bottling-- I've had Jed Steele's 'Blue Franc', it was my go-to wine for a soft red to drink in damp Puerto Rico Summers until the importer droppd it. Most impressed by mouthfeel & density, finish a little short with those soft tannins & vinification seemd to tame the acidity a bit much. Tried IBY's basic Austrian model & had surprising complexity for a fairly mass-produced wine. An Austrian friend gave me a couple of names mostly connected to Styria, as she's from Graz, but they're hard to find-- or not so much anymore?
(PS- I'm taking deep breaths in an effort to review some middling Ugni Blanc from 'down here' for WBW just before I get on the plane back up to the Northern Hemisphere, tho I finally gave up on trying to milk a stopover on my AAdvantage ticket & am diving directly into the sweltering political Summer brewing back home...)

Hi, D-J RS. I, too, like the Iby bottling, and you will find this a bit more high-toned in its fruit than the Iby, but still delicious. Good luck with the Ugni Blanc--I look forward to reading all about it!