Over at the Wine Spectator, the wine magazine with the largest circulation in the world, they've just published their Top 100 Wines of 2006 list this week. It's always a one-two punch for me: the release of the juicy, low-cost Beaujolais Nouveau on the third Thursday, followed shortly thereafter by the list of wines I can't find and can't afford. Even though I try not to be influenced by these annual top wines list, like most serious wine lovers I find it impossible to avoid them. So rather than sticking my head in the sand I thought I'd face the list and see what it offered.

PS. As I caught up on my wine blogging reading, I discovered that Winehiker and Tom Wark over at Fermentation have both posted some pretty hair-raising stories about the impact this little list has on the world of wine consumption and production. Really makes you pause and reconsider how we run around like crazy people after some wines and not others based on media attention. Maybe the world of beaujolais nouveau and the world of the Top 100 aren't that different??

The 2006 list seemed pleasantly different to me than those of past years. 30 of the top 100 wines were $25 or under--nearly 1/3. I haven't done the math on the last 5 years' list, but my sense was that this year there were more options for those of us who put ourselves on stricter wine budgets, and fewer bottles retailing for over $100. While the average price for a bottle on the list was $49 (up from $43 last year), many of the more budget friendly wines this year are not limited production bottlings, but wines that are readily available from makers like Kim Crawford, Jacob's Creek, and Greg Norman.

The highest ranking bottle under $25 came in at #16, and was the 2004 Langmeil Shiraz Barossa Valley Valley Floor. ($23) I got a lot of hits for this wine when I searched for it, suggesting you can still get your hands on it. The next budget friendly selection was at #36, the 2004 Hess Collection Napa Valley Chardonnay ($20). You have to shop carefully for this wine, since Hess has both "Selection" and "Collection" labels, but it was available in lots of outlets for $18.99). Other budget-friendly highlights included the 2005 Matua Sauvignon Blanc Paretai Estate Series ($17) at #37, the 2006 Kim Crawford Sauvignon Blanc ($17) at #40, the 2004 Chateau Ste. Michelle Canoe Ridge Estate Chardonnay ($20) at #62, and the 2003 Jacob's Creek Shiraz South Australia Reserve ($13) at #64. 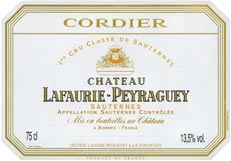 I even discovered I owned two of the top 100 wines: the 2005 Elk Cove Pinot Gris Willamette Valley ($18) at #77, and the 2003 Ch. Lafaurie-Peyraguey Sauternes ($43/750 ml) at #6. I bought this sauternes last month at Beverages and More in the half bottle size for $23.99. So if you're out shopping on Black Friday, and pass a BevMo, you might want to see if they've got some bottles on the shelf to put away until Thanksgiving 2010 and beyond.

These are just the highlights, so do go over and check out the whole list, paying particular attention the wines from #50-#100, where most of the under $25 wines can be found. Even if you don't subscribe to the magazine or the online site, you can download the whole list in PDF by clicking here.
Posted by Dr. Debs at 10:56 AM

Maybe, just maybe, part of the reason for the greater presence of less expensive wines is that WS is seriously taking note of them for the first time, and that the overall quality of wine IS increasing. (And we know that is is, long term. No comparison between the average wines of the 60s and 70s and today. Infinitely better today.)

It's just a theory, of course. You may be closer to the mark when you suggest that WS is showing more price sensitivity. The very rich, we hear, are continuing to get rich at an alarming rate; maybe WS's less exalted readership is feeling a bit more pain right now.

Thanks for the tip, I'll have to check out their list. Curious to see if I've tried many!

Welcome, Terry. I think the overall increase in wine quality does play a role, as does the increasing market share of wines from Australia, New Zealand, and Chile--all places that seem to be able to make great wine for a great price.

Welcome back, David! It was an interesting read for me and far less daunting than previous lists price-wise. Looking forward to reading your sparklers note in a few weeks for WBW #28.

No doubt the WS editors do their best to sprinkle in the less expensive wines, in their effort to appear more populist than they really are. I strongly recommend Wine & Spirits magazine's top 100 wineries issue, now out. The write-ups are both deeper and more passionate. I'd also add that the distinctions between the methods used by each of the major glossy buying guides vary significantly. I covered this angle extensively in two pieces for Wines & Vines:

I also prefer the approach Wine & Spirits takes to their reviews and find their profiles of wineries more in depth and broad-minded than WS, but (as I said over at Fermentation), I do think they are following the WS format for reviews which I think is a shame. And their food recs are sometimes nuts--"try this with seared boar" is not likely to be a consumer friendly tip!

You're so much better off choosing from employee recommendations from a very good wine store of imports from top importers in such a price range. Importers such as Terry Theise/Michael Skurnik, Jorge Ordonez and Domaine Select.

Hi Jack, and welcome. Of course, some don't live anywhere near a good wine shop (I lived in such a town once, so I know this to be true. It was 45 minutes to the nearest decent store--and the owner was a Cal Chard lover so he loved oak. I do not.) I think it's a problem both to accept all the Wine Spectator's recs without thinking, or to reject them all. When I was just starting to learn about wine, I read Spectator, Decanter, and W&S religiously cover to cover. I learned a lot, and seeking out their recommended wines helped me learn about varietal characteristics which is my preferred way for tasting and selecting wines. Slavish adherence to the 90+ pointers and never buying anything else is, I admit, a problem. But everyone needs to start somewhere and I think you can do a lot worse than picking up a Kim Crawford Sauvignon Blanc--one of their picks.