It's the third Thursday in November.

That's right, it's Beaujolais Nouveau day. Mom and Dad were arriving at LAX, providing me with the perfect opportunity to stop by the Wine House and to pick up some Beaujolais Nouveau so that we, along with many other people all over the world, could join in the fun of this harvest celebration. 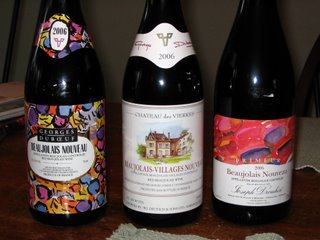 Now, I love all the wines of Beaujolais, including the Nouveau wines. The latter are perfect for served slightly chilled with (among other things) Thanksgiving leftovers. The crus are lovely, low-alcohol reds that are fruity, uncomplicated, and excellent value. Earlier this fall I reviewed a cru beaujolais, a 2005 from Pierre-Marie Chermette (see my earlier post). Cru beaujolais are aged wines, which come from specific sub-appellations within Beaujolais. Beau over at Basic Juice posted a great story yesterday about the area which I encourage you to read if you are only familiar with Beaujolais Nouveau. He's right that people drink the Nouveau wines and think that all Beaujolais tastes like this--which is a shame.

The 2006 vintage is being hailed s the best since 2003--which was very good and produced cru Beaujolais wines that had staying power. You could keep those wines for a few years and they tasted like baby Burgundies--all silk and raspberry. Most Beaujolais wines (and certainly the Nouveau wines) are made to be drunk within a few months to a year. My dad is fond of saying "Beaujolais Nouveau should age on the back seat on your way home." But keep in mind that it's worth talking to your wine dealer and doing some research to discover if the cru Beaujolais you've bought is likely to last if you store it properly. Older cru beaujolais (like the 2002 Georges Duboeuf Fleurie that was in my Thanksgiving recommendations) can be suprisingly complex for gamay wines.

So why drink Beaujolais Nouveau? For me its about participating in a wine ritual of harvest and early sampling of young wines that is not part of most people's lives. I read about Bordeaux barrel tastings in the wine mags, but hey, I'm not likely to go to participate in such an event any time soon. But I can go to my local wine store and buy some young Beaujolais wine. And this is, in my opinion, the real reason to drink Beaujolais Nouveau. They are not great wines--but sometimes they contain hints of the great cru Beaujolais wines that will be released in a few months. Once every year ordinary joes and janes get a glimpse into the process of wine-making. They get to taste young, unfocused wines and try to imagine what some of the grapes will become.

We decided to do a blind tasting, paper bags and all, of the 3 Beaujolais Nouveau wines I purchased. After all was said and drunk, there were differences among the wines and we enjoyed comparing what we tasted and which wine we preferred. Here's how the tasting unfolded:

Wine #1 turned out to be the 2006 Joseph Drouhin Beaujolais Nouveau ($13.99, The Wine House). This was the least favorite among the three we tasted. It was very aromatic, with bananas, raspberry preserves, and a metallic, tinned tomato-paste smell. The flavors were smooth raspberry with an underlying meaty depth and a slight banana extract edge. This was a smooth, moderately flavorful wine despite all the aromas that had preceded it. Given its price, and the fact that you can get cru Beaujolais for less money, I decided this was poor QPR.

Wine #2 turned out to be the 2006 Georges Duboeuf Beaujolais Nouveau ($9.59, The Wine House). This was the favorite for two of us. There was much less aroma then in the Drouhin, and what was there was raspberry and spice. On the palate this wine had more freshness and even some soft tannins, with silky strawberry and nutmeg flavors. Again, given that you can get more complex cru Beaujolais wines for about the same price, I decided this was good QPR.

Wine #3 turned out to be the 2006 Georges Duboeuf Beaujolais-Villages Nouveau Chateau des Vierres ($9.99, The Wine House). One of the drinkers thought this was the best wine (and I admit I had really looked forward to this wine because it had a chateau designation). It was similar to the regular Duboeuf BN with moderate aromas of raspberry, but in this case there was an undertone of rare beef. This one had the most acidity, but less tannins, and flavors of banana, strawberry, spice, and even a hint of citrus or green grapes. I will look for this wine when it is released as a cru Beaujolais because I think it may be excellent with some age. For now, it's good QPR.

Because the wines of Beaujolais are not fashionable at the moment--undeservedly so, in my opinion--you can get most cru Beaujolais for about the same price as Beaujolais Nouveau. But there is no media hype when the crus are released. They simply slip onto the shelves of your wine store, overlooked by most people as they head for the merlots. Beaujolais shouldn't just be on the table on the third Thursday of November. Drink your Nouveau now, but don't forget about the wines of Beaujolais next spring and summer.
Posted by Dr. Debs at 8:15 AM

Expatriates in France--and around the world--are writing up their various experiences with Beaujolais day. They don't focus exclusively on the technical aspects of the wine, either, but the cultural and social context in which it is shared. I am building a list of blogs with posts about Beaujolais Day. Maybe you'd be interested?

Hi, bluevicar. Please come back and leave us a link to your list of blogs that talk about Beaujolais Nouveau--sounds like fascinating reading!

Hey folks, here's the link to bluevicar's site, which has great information on beaujolais:
http://bluevicar.com/

Good writing on the Beaujolais Noveau. I agree that it is not a fantastic wine itself in any way. But it is a great yearly little celebration of the release and that makes it worth drinking and enjoying just for what it is and represents...

Thanks, Victoria. It's a ritual I wouldn't miss, that's for sure. And I do love cru beajolais wines. They've become my everyday substitutes for pinot noirs. Much more budget friendly!