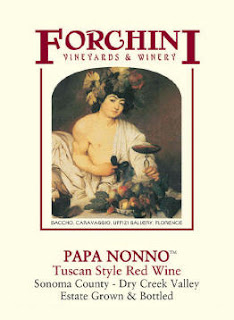 Every now and again I just need to watch Moonstruck. I love the scenes in the Italian restaurant, the dinners at home, and the omnipresence of wine throughout the movie. And then there's the soundtrack.

If you are in the mood for Italian-American food (spaghetti with meatballs, a pizza) a movie, and some amore, you might want to pick up a bottle of the very good QPR 2004 Forchini Papa Nonno red blend ($13.95, Chronicle Wine Cellar). Forchini Vineyards was started by up by Jim and Anita Forchini in 1996, after Jim had worked in the business as a wine maker for nearly two decades. (Previously he'd been a mechanical engineer--there is hope for us all!) The Papa Nonno is a tribute to Jim's grandfather Pietro Bernacchi, who arrived in the US from Lucca, Italy in1908.

The 2004 Forchini Papa Nonna ($13.95, Chronicle Wine Cellar) blends together red and a small amount of white grapes. With 58% Zinfandel, 27% Cabernet, 11% Carignane, and 4% mixed whites--nearly all from grape vines that are 50-90 years old--I found this to be a soft, medium-bodied wine. It was deep, inky garnet in color. I didn't get much aromas, just a little bit of red fruit and spice. Flavors of blackberry and brambles from the Zin were accompanied by mild spiciness and dusty tannins from the 19 months the juice spent in American oak. I thought that the winemakers did a good job capturing the bright acidity of a Tuscan chianti, even if there wasn't a drop of sangiovese in the mix. We had it with a pizza margherita and salad, which was a perfect pairing, but it would be equally good with spaghetti and meatballs, eggplant parmesan, or any other Italian-American favorites.