Weekend Wine Shopping Across the Pond 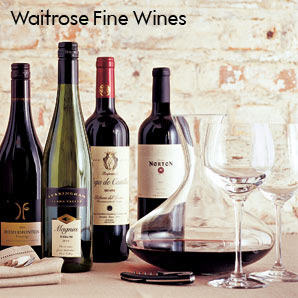 I've been in London doing some work, and decided to go out and find what folks in the UK are drinking wine-wise. It's a bit heretical not lifting a pint in a pub--and I do love British beer and cider--but the lure of a Waitrose was too much for me, so it was into the wine section of a nearby supermarket that I went.

Waitrose is an up-market grocery chain that you can find throughout much of the UK. It's known for its wide selection of food and wine, and the wine section was certainly as good as those in the most expensive, super-selective US grocery chains. Plus, you can pick up a handy catalogue of all the wines currently on offer, order cases online, and a lot more that special services that supermarkets over in the US don't offer their wine-buying customers.

Glancing through the shelves I was struck by the geographical scope of the wine selections. They had wine from Lebanon, Israel, Greece, Moldavia, and Hungary as well as Chile, Argentina, South Africa, and Austria. Europe's everyday wine culture meant that there were abundant interesting wines--and nearly all of them were less than £20, which in terms of buying power is about $20 (a small cappuccino at Starbucks is £2.89, for comparison's sake) The other thing I was struck by was the preponderance of screwcaps--they were on practically everything, including wines from Burgundy.

So what did I sample? I got a 2005 Bouchard Aine et Fils Bourgogne (roughly $16 at this rate of exchange, under a screwcap), which was a brightly cherry-colored red with a nice mixture of fruity and earthy aromas and flavors. I also sipped my way through a 375-ml bottle of sweet vouvray, the 2005 Chateau Gaudrelle Vouvray Reserve Speciale (roughly $18) with flavors of caramelized bananas that struck a good balance between sweetness and acidity. And finally, a truly amazing 2006 Diemersfontein Pinotage from South Africa that practically knocked you out with its double-espresso and bitter chocolate aromas and flavors (roughly $16, under a screwcap).

Though you won't find a single one of these wines in the US, they were eye-opening to me, not least because of their low, low cost and high, high value. Given the fact that the buying power of the pound is roughly that of the dollar (though the exchange rate is not favorable right now at nearly $2.00 to £1.00), at just £7.99, £8.99, and £7.99 respectively, they were all genuine bargains in my book. Maybe in time US grocery chains will be offering the services to wine consumers that are available in the UK at Waitrose? And how about some more Lebanese wines??
Posted by Dr. Debs at 12:12 PM

What a great selection. And I'm really interested to hear about the proliferation of screw-caps. When we were in London in 2004 we had the roughest time finding a bottle with one! We didn't want to buy a cork-screw (that whole weapon thing when traveling) and the wine shoppe we stopped in only had 3 or 4 bottles with screw tops. I've actually had a quite a few Lebanese wines as one of our favorite restaurants is Lebanese and the wine menu is heavly Lebanese.

Interesting to read an Americans take on Waitrose. The chain is probably the best one in the UK for wine choices. But London offers much, much more than the supermakerts for the wine lover - there are dozens of independents and small chains you should try and visit - prices will be higher than the supermarkets but the quality and range in addition to serivce I hope will impress.

Hi, Sonadora and welcome, Andrew. I'm going to try to get my hands on that Lebanese wine, Sonadora (called Masur)over here. I see some places sell it. And Andrew, I've been to a few independents and smaller chains (Unwins, Berry Bros, and of course my favorite from Oxford days, Odd Bins). But if you've got some specific recommendations I'd love to have them for future trips.

A Burgundy under a screw top? Cats and dogs living together? Surely you were a little tipsy and made a mistake! I love touring wine shops when I am on the road. Going to London in June, so thanks for the heads up.

I wasn't hallucinating, Joe--I swear! I was looking at their mid- and lo-price burgundies, so this may have been related to price point. The beaujolais were all under screwcaps, too.