When we think Alsace we think fruity white wines made with elegance and finesse. Back in the Medieval period, Alsace was known for its red wines, too. Groumets, certified wine brokers who helped to make deals between the vintners and their consumers (and made sure the local authorities got their tax cut) were kept busy in Alsace between November and January. During this period customers traveled to Alsace to taste wines, make deals, and get tasting reports from the groumets. It is from the groumets that we get our modern term "gourmet," as well as wine tasting report and, eventually, the wine blog like the one you are reading.

I've long been a fan of Alsatian whites, which are so well suited for pairing with Asian food, but 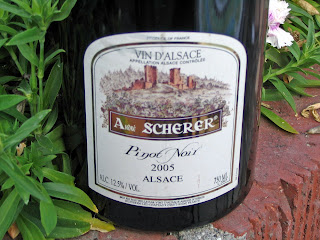 recently I had the chance to try an Alsatian red. It was a chance to taste a little history when I opened up the 2005 Andre Scherer Pinot Noir ($12.95, Chronicle Wine Cellar; also available at Weimax). Talk about history. Vignoble Andre Scherer is owned and operated by Christophe Scherer, the 9th generation of his family who have worked as vignerons in the village of Husseren-les-Chateaux (pictured on the label to the right) since 1750.

This very good QPR, 100% Pinot Noir wine tasted to me like a red wine poised halfway between a gamay from the Beaujolais and a Burgundian red. It was made from fruit hand-picked from 30 year old vines. Aged for 10 months in small oak barriques, which gave the aromas and flavors sweet vanilla overtones, it was bright berry in color, with high-toned cherry and strawberry flavors. There was a bit of alcoholic heat on first opening--even though this was a relatively low alcohol wine. I would recommend serving it cooler than most reds, much as you would with a wine from the Beaujolais. Its getting harder and harder to find drinkable pinots that are under $15 (thank you, Sideways) and the fresh flavors, silky texture, and heady aromas of this wine definitely make it a very good QPR wine given the varietal.

With this wine I would recommend simple French homestyle cooking or bistro fare. For me, that means coq au vin. This is a recipe that requires a fair amount of vino in the pot. The recent debates about cooking with wine started by the NYTimes and followed up by Sonadora at Wannabe Wino and JohnG at Quaffability, have highlighted the dilemma of what wine to use when you have to use a lot of it in your cooking. While I agree that you can deglaze a pan with almost anything, or use up to 1/2 a cup of almost anything to bring some acidity to a sauce, if you are going to be using more than a cup of wine in cooking like coq au vin I would recommend something you don't mind drinking. Some recipes, like Tyler Florence's, call for a full bottle of wine. As a time-saving measure on a busy worknight, I used Rachael Ray's version from her first 30-Minute Meals Cookbook (p. 149, since the $!%# thing isn't indexed). Really, coq au vin is just chicken cooked in red wine, so don't stress too much about which recipe to use or you miss the point. This wine was perfect for cooking and drinking, since it tasted great and it didn't cost too much.

If you are interested in learning more about the wines of the region, both red and white, Alsace Wines is the official site for the region's winemakers and is available in a number of languages including English. Though often overlooked in the enormous shadows cast by Bordeaux and Burgundy, the wines of Alsace offer great value, and are great food wines so try one if you get the chance.

Thanks for the link. And I am still intrigued by the cooking with wine article. The author didn't really make any distinction between dishes that called for a little bit of wine or a lot of wine. I'm trying to imagine if she'd put that $2 Chuck in a coq au vin...in my mind that would be awful. I really am tempted to try it just for kicks...but then again, I don't want to ruin a great meal!

I was lucky enough to travel there about 10 years ago and visited quite a few wineries. Just for you folks out there who like sausage, their wines go great with any type of sausage fixed any way. They serve alot of sausage in that area of France with many different sauces, the wines went well with all thoses sausages and potatoes!

Hi, ladies. Welcome back, Winedeb! First, yes, sausages and taters would be yummy with this wine. Perfect example of local food and local wine going so well together. And Sonadora: don't make coq au vin with $2 Chuck. You are right. It would be awful. Possibly beyond awful.