History in a Glass 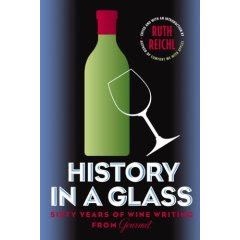 Gourmet magazine debuted in the 1940s at a time when, thanks to two world wars and prohibition, America was a virtually wine-free country. Grape vines that had been lovingly tended for centuries had been ripped up, and we lost our "everyday wine" culture.

Reading History in a Glass, a fabulous collection of stories drawn from Gourmet magazine's monthly wine columns by editor Ruth Reichl, is like watching the History Channel for wine. (Amazon.com, $18.21) Filled with writing from some of the best wine and food writers who have ever put pen to paper--Frank Schoonmaker, James Beard, and Hugh Johnson to name just a few--this book gives you an inspiring look at the resilience of the American wine industry, at its success at coming back after almost total extinction, and at the growth of US appreciation for wine.

It's hard to pick a favorite story from among those included, but I think mine is Everett Wood's 1957 "The Last Kellermeister." Heinrich Allinger was the cellar-master of Schloss Johannisberg, a famous winery on the Rhine. Only three years of his life were spent outside the village where he lived, all fighting in World War I. When his employer tried to give him a three-week vacation in 1950, Herr Allinger refused to go. He knew every barrel in the cellar, and talked to them like children, chiding one for not developing as he'd expected it to, praising another for surprising finesse. A lifetime of wine knowledge was in that man, and Wood's fluid writing makes it possible for us to get a sense of him, and the information that he had accumulated over the years.

There are lovely surprises on every page of Reichl's collection--Hillaire Belloc's advice on wine manages to be both timeless and dated, Schoonmaker's 1948 survey of northern California wineries is a revelation in terms of the diversity of grapes planted and the wine fashions of the time, and Gerald Asher's 1993 story on Oregon Pinot Noirs was one of the first to catch the rising quality of that region's wine. It's been a while since I reviewed a wine book, and while I mentioned this book in my holiday gift picks for wine lovers, I wanted to give a fuller idea of why I think this book is so great. It's a book to have on the bedside table, to read a story before dropping off to sleep with visions of grape vines dancing in your head.
Posted by Dr. Debs at 9:33 AM

Good to see you, Elsbeth! I think you'll really enjoy it--and be surprised at what USED to be planted in California. There's some great stuff about early Monterey and Santa Cruz wines, too.