In this Corner: the Bruiser from Bulgaria 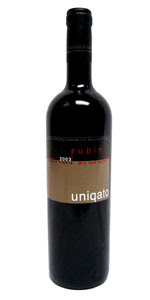 Some wines announce themselves with with a gentle purr. This is not one of those wines.

This is a bare-knuckle prize-fighter of a wine, a big, bruising red that is not for the faint of palate. It is a wine that needs some careful handling to bring out its softer, more sensitive side. But it is unusual, and (like many prize-fighters) possesses an unforgettable character.

The 2005 Damianitza Rubin Uniqato ($7.99, Trader Joe's) is a red with good QPR. It is made from Rubin grapes, a cross of Nebbiolo and Syrah developed in Bulgaria in 1944. Unfiltered and full of sediment, it was dark garnet in color and full of mouth puckering tannins. In short, this was a wine that benefited from decanting, and would also benefit from some more time in the bottle.

I don't bother much with decanting in the normal course of things, though I probably should, but as soon as this went into my glass I thought, "OK, time to bring out the decanter." If you don't have a decanter, a clean jar or pitcher will do. What you are doing is getting some more air in the wine and, in this case, hoping to filter out the sediments by using a wine funnel with a screen on it. FYI, a mesh tea strainer works just as well and you probably have one in the back of the same drawer where you store your corkscrew. If you want to see someone demonstrate decanting, and what it can do for a wine, check out this video from Gary Vaynerchuk of Wine Library TV as he does a decantation!

After decanting this wine, the spicy aromas and indefinable black fruits detectable on first opening and sipping the wine gave way to herbal, fruity, and meaty flavors. The aromas and flavors developed along the grilled meat/grilled herb spectrum, with fruit taking a back seat. There were notes of cinnamon on the dry, dry finish.

Damianitza is in southwestern Bulgaria near the Greek border in

Thrace's Struma River Valley. Founded in 1940 during the height of communist wine-making in the region, it was privatized in 1997. Not surprisingly, privatization has brought both challenges and opportunities to Bulgarian vintners and winemakers, and Damianitza is one of the wineries that is recognized for its efforts to bring the best Bulgarian wine traditions into the 21st century. Wine Report 2007 listed Damianitza among the 10 fastest improving wineries in Eastern Europe, for example. They bottle over 2,000,000 bottles a year, and use native grape varietals like Melnik and Rubin. JohnG over at Quaffability tried their Melnik a little while ago and was less than completely impressed. I'll try to open up my bottle soon and add my tasting notes to the mix.

In the meantime, if you want to try this affordable and easy-to-find Bulgarian wine, here are my recommendations for dealing with this young, brawny specimen: 1. decant 2. Serve it with hearty food, like steaks, grilled meat, or any robust fare that's not too spicy because trust me you do not want to accentuate the tannins in this wine. 3. Take your time drinking it and enjoy the way the flavors change with more air and time out of the bottle.

I also dig Bulgarian wine. This one is a unique find. Too bad this one is not available at Trader Joe's wine shop in New York City.
I wish I can send you money to purchase a couple bottles of this wine and have them mailed to me.
Sigh!

Welcome Rouge and Blanc! I look forward to reading your post, and thanks for stopping by the site. Bulgarian wines may be an acquired taste, but I find myself thinking about this one even after finishing the bottle so I know I will be on the lookout for more wines from the area.

I am from Bulgaria and a fan of Melnik wine as well. Just to correct a few assertions in the text: 1940 was not the height of communist wine making in Bulgaria. The communists did not take power in the country until 1944.

Also, the Struma Valley is not in Thrace but in Macedonia, sort of half and half in Bulgarian (Pirin) and Greek (Aegean) Macedonia. This is the light blue area in your map. While the specific Melnik grape and eponymous wine comes from the region of Melnik, the Uniqato wine is from a special subvariety of Melnik grapes that Damianitsa started experimentally growing in Thrace. This is the big green region on your map.

I like the Uniqato but being a traditionalist I prefer another of Damianitsa's reds - Melnik Wine from Harsovo - a microregion near a village in the vicinity of Melnik.