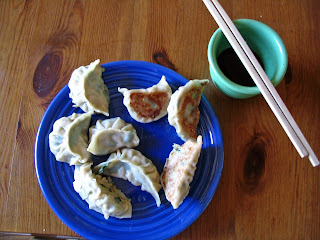 Sundays in LA often involve a trip to your favorite dim sum restaurant for a brunch of steamed pork buns, dumplings, and other Chinese delicacies. But the lines can be epic, and the noise significant, especially if you head out to one of the big restaurants in Monterey Park.

So our friend Mae taught me how to make dumplings and in my opinion this was better than waiting in a long line and then eating out. The process itself is very soothing, and conducive to sitting around the table, chatting and sipping wine, while the dumplings get filled and pleated up. And then--you get to eat them!

Brunch--even Chinese brunch--still requires bubbly wine as far as I'm concerned. But a champagne or brut sparkling wine wouldn't work. With our dumplings we had the 2006 Fetish Wines Moscato "Field of Dreams" from the 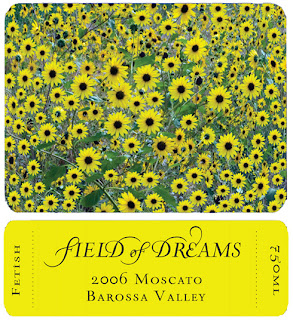 Barossa Valley ($16.00, Malibu Wines; available from other merchants for under $15). Fetish Wines is a proprietary brand of Joshua Tree Imports, who also make Razor's Edge Wines. The wine was made for Fetish by the well-known Australian winemaker Wayne Dutschke from grapes grown on his Barossa Valley estate. I selected it in part because it was a warm afternoon, in part because moscato goes well with Asian food, and in part because its low alcohol (just 8% alc./vol.) was not going to get in the way of our pleating technique (see below). This good QPR wine was simple, fresh, and very sweet--kind of like drinking fizzy lemonade for grownups. It was a tad one-dimensional, with lemon blossom aromas, a sweet lemon palate, and a slightly bitter lemon pith edge to the finish. Still, it was refreshing and and if you are looking for a very lemony low-alcohol wine this would be a good choice. Plus, drinking it makes you feel a bit naughty, like you've spiked the punch at the prom.

If you don't live near a good dim sum restaurant, or just want to have your own dumpling stash in the freezer, here is the recipe that we followed. The results are fantastic!

1. Using the shredder attachment or the steel blade of a food processor, shred or pulse cabbage chunks in small batches until fairly fine. With each batch, remove the shredded cabbage and, using your hands, squeeze out all the moisture that you can. You will be surprised at how much water comes out! Put in the bowl of a mixer, or a large bowl.

3. Take a dumpling wrapper and hold it in the palm of your left hand if you are right-handed, your right hand if your are left-handed. Moisten all around the edge of the wrapper with your finger dipped in water. Put a heaping spoonful of dumpling filling in the center. Bring the wrapper together in the center, and pinch. Then, pleat the back side of the dumpling wrapper against the smooth front side, pinching it slightly as necessary to get the pleats to stick. Curve the dumpling slightly when you are done, and sit the dumpling on the tray on its base so that the pleats sit up like a fin.

4. At this point you have several options.

You can take your tray and stick it in the freezer for about 6 hours, then take it out and make up bags of dumplings for later use. Frozen dumplings take slightly longer to cook, of course, but there's no need to thaw them first.

Or you can eat them right then and there. There are three ways to cook dumplings.

You can cook your dumplings in gently boiling water. They will float to the top of the water when cooked.

You can steam your dumplings over gently boiling water using a steamer insert or bamboo racks for about 3-5 minutes until the wrapper is cooked and slightly transclucent.

Or, you can pan fry them in a bit of oil in a skillet that has a lid. Place the flat, bottom of the dumpling in the hot oil. After 2-3 minutes, when a nice brown crust has developed, add a bit of water, clamp the lid on, and steam the dumplings for 3-4 minutes. Then take the lid off and continue to cook until nearly all the water has evaporated. (this was the method I used in the picture above)

Serve your dumplings with a bowl of dipping sauce made of soy sauce and vinegar (balsamic, chinese black vinegar, rice vinegar, or cider vinegar are best here), mixed to your taste.
Posted by Dr. Debs at 9:02 AM

I am very impressed if the dumplings pictured are the ones you have made.

I seem to have an inability to fold or construct any three dimensional object and my attempts at this many years ago were very odd is appearance.

A Barossa Moscato with Dim Sum. Two things I have never done, but it sounds sublime. Was this an experiment, or have you tried this pairing before? How does this compare with an Italian mostcato?

Hi Edward and Joe! Edward, these were the dumplings I made and they were first time attempts. The key is keeping the front of the wrapper straight after you've pinched the center bits together, and just pleating the back of the wrapper against the straight front edge.

And, Joe, I've never tried this particular pairing before but it worked. I actually think that an Italian moscato would even be better, because an Italian wine typically has more complex floral aromas and a little less lemon on the palate (like the Bonny Doon moscato that I reviewed which they import from Italy). Another wine that would work is the Schloss Biebrich german sparkling wine (check under sparkling wines in the side bar).

Yum! I am definitely going to try this recipe filling. I enjoy making (and eating) Chinese style dumplings and potstickers. Thanks!