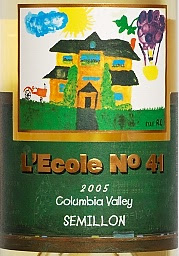 I don't drink much semillon, in part because there isn't much of it sitting on the shelves and in part because I'm such a fan of really citrusy whites. In my ongoing efforts to try wine that's new and relatively unfamiliar, I decided to pick up a 2005 L'Ecole no. 41 Semillon (between $10 and $20 through most merchants) from the Columbia Valley AVA in Washington State and see what I could learn about the varietal.

Semillon goes into the blend of one of my favorite dessert wines, Sauternes, but it also is used in dry table wines like this one. L'Ecole No. 41 is one of the most highly-recognized producers of this varietal in the US, so I knew I was in very good hands. The 2005 L'Ecole no. 41 Semillon had the same gleaming golden color that I associate with Sauternes. The aromas and palate were entirely different, however. When it was poured, I could detect scents of toasted bread, pear, and butterscotch. The butterscotch and pear continued in the flavors, accented by a very rich and round vanilla that made this wine feel velvety when you sipped it. Given its price tag and its abundant varietal characteristics, I felt this wine had excellent QPR.

Semillon would go with a variety of foods, from roast chicken to chicken salad, omelettes, dishes with creamy sauces, and cheese dishes. Because of its rich mouthfeel, steer yourself towards food that has a buttery component. Semillon goes particularly well with scallops, for example, which (though seafood) have a buttery taste that sometimes clashes with citrusy, highly acidic wines. Try semillon with this recipe for scallops with orzo, tomatoes, and ginger.

If you're intrigued by semillon, check out this month's Great Grape Day posts over on

Sediments, the viticultural part of the WellFed Network where Andrew Barrow of Spittoon leads his merry band of contributors through the good, the bad, and the ugly of one grape varietal each and every month. April was semillon month, and there's a bunch of information over there ready for reading, just click on the logo to the right.

Look for 2005 Torbreck 'Woodcutter's' Semillon from Australia. It's some good stuff. Fat and juicy, but balanced with nice acidity. They don't use any wood, which (I think) really lets the grape shine

I forgot to mention to you "thanks" for refering to me in your post yesterday! A couple of friends of mine who I recommended your site were excited to see me mentioned when they checked in with you yesterday. Fun!
Also have picked up another rose, French, to try tonight. More on that later!

John, thanks for the recommendation. Now that I've had an oaked version, I'd like to try the unoaked variety. And WineDeb, you're welcome! Good luck with that rose.