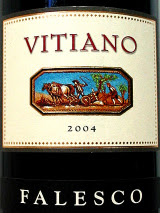 Most weekends, Fred Koeppel has a homemade pizza. He shares his culinary successes, and his wine pairings, with his readers over on his blog, Bigger than Your Head, and his last picture was so mouth-watering that I just had to have pizza. Mine was "home assembled" rather than homemade, from pizza dough, sauce, and toppings I picked up at Trader Joe's. That was the easy part. Then there was picking wine to go with it. As you probably know, pizza can be a pairing problem. Not any old red will do. Ever had cabernet with pizza? Yech. Too oaky, too tanic, too huge. Sangiovese is a natural partner for pasta with red sauces or pizzas, but it can be difficult to find inexpensive sangiovese that strikes a balance between its acidity and its richer flavors.

If there is a perfect pizza wine (read: one that's easy to find, easy to pay for, and easy to drink) it's the Falesco Vitiano from Umbria. I recently had the 2004 Falesco Vitiano ($9.99, Beverages & More) and it had excellent QPR. Made from a blend of sangiovese, cabernet sauvignon, and merlot, it was deep, dark ruby in color. Aromas of earth and herbs give this wine a distinctly Old World character. These give way to flavors of cherries, chocolate, and eucalyptus. More earthy notes round out the finish and keep the wine grounded. All in all, the fruit is of secondary importance to the other abundant flavors and aromas. I found it exceptionally complex for a wine at this price point.

In the past I've highlighted this wine's usefulness as a party wine. But this is also the spaghetti and pizza wine that you've been looking for. It is widely available, insanely inexpensive, and yummy. Your takeout pizza will probably set you back more than the wine will. I've had the past 2 vintages of this wine, which were consistently good although not quite as good as this, and the 2005 was recently released. Drinkers over at CellarTracker! report that it's pretty darn good, too. My only caution is that this label can have a higher than usual incidence of bottle variation--that aggravating tendency for bottles to taste slightly different despite coming from the same vintage. Bottle variation is the price we pay for drinking something as vibrant and alive as wine. Don't want any bottle variation? I'm afraid it's Coke for you--and more Falesco Vitiano for the rest of us.

Ah, Vitiano! I totally forgot about that wine. I used to buy it regularly from The Wine Club, which we have in San Jose over by the Costco. Good stuff (particularly at 9.99 and with the right food).

Food is crucial on this one. It's ok as a party wine, but really shines with delivery pizza or a homey spaghetti with meatballs and a big green salad. (maybe garlic bread, too).