This month, Catavino's Virtual Tasting focused on a region rather than a varietal and after some searching I managed to find a wine that fit their brief to try something from the Bierzo DO. For someone like me who likes wine adventures, this was a great assignment. First, I didn't know where Bierzo was. Second, once I found it the list of indigenous grapes planted there took my breath away, since I had only had one or two.

Bierzo is in the northwesterly part of Spain (Ryan and Gabriella have posted a great map, if you're still unsure of precise locale), and is home to 48 wineries. It used to be an area known for its mining industry, but with the mountains protecting the viticultural areas from some of the most severe weather coming off the Atlantic Ocean, Bierzo has become a growing and increasingly popular wine region.

I wanted to try a Bierzo white, but had a hard time finding one, so I ended up with a red made 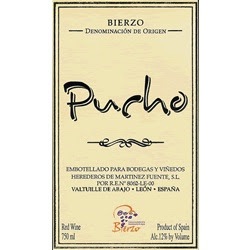 from the indigenous mencia grape: the 2004 Pucho Bierzo ($15.99, Whole Foods; between $9 and $14 from many merchants). I bought this on impulse, with no advice or advance research, and in retrospect I have not been happy with a single Whole Foods purchase I've bought in this fashion. This was no exception. It was a red wine with old school style, with a rich plummy color and the fruit taking a decidedly back seat to the acidity and minerality. As the wine warmed up, it was possible to taste plummy fruit, accented with smoke and spice. The finish was fairly short, and not even the smoke and spice lingered. Though I've never had a mencia wine before, I felt like it was in the same varietal ballpark as cabernet franc (with its acidity and minerality) and sangiovese (with its acidity and plummy fruit flavor). For the price I paid at Whole Foods, I would have to say this represented poor QPR, but had I spend $8.99 for it at K&L I probably would have said good QPR. Still, it was sad to have my first ever poor QPR Spanish wine--the country has had a perfect track record so far!

I'm going to do some more research among the postings in Catavino's forum and see if I can find more examples of Bierzo wine. I'd certainly like to give mencia another shot, and would love to try a white from the area if I can get my hands on it. Until then, I'm off to rummage in the wine storage to find a Spanish wine for WBW #35.
Posted by Dr. Debs at 7:58 AM

Welcome, Richard A. That is so good to know because, as I said, this was the first disappointing wine I've had from Spain. I've been reading the forum posts and have a few to try that others enjoyed.