Have you ever received a shipment of wine that you've been dying to try only to discover that it tastes funny? Not corked funny, like wet cardboard. Not cooked funny, like there is very little flavor or aroma. Just funny: muted, out of whack, disjointed? How long did you wait to open it? Until you'd pulled the tape off the packing box with your teeth? 2 hours? 2 days? If you answered any of the above, you probably didn't wait long enough.

If your wine tasted "funny," your wine may have been shocked. As a chemically volatile 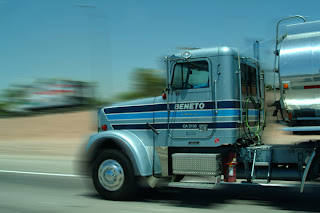 substance, wine suffers from two distinct kinds of shock: bottle shock, and travel shock. There is scientific evidence for the former, lots of anecdotal evidence for the latter, but I personally think that they both exist and that both effect the drinkability of your wine. After all, how do you feel after you've rocketed down the highway at 65 in a warm car? Would you want anyone to base their assessment of you on the impression you gave as soon as you step out of the car and onto the pavement? (photo by Ian Britton from FreeFoto.com)

So what are bottle shock and travel shock? With respect to bottle shock, during bottling the wine is exposed to large amounts of oxygen and sometimes sulphur. These can alter the taste and smell of a wine, and not for the better. Sometime between a few weeks and a few months, this imbalance adjusts. Cameron Hughes described bottle shock in a recent email newsletter this way:

"The reality of bottle shock is that the wine, like a pendulum, will swing back and forth, in and out of consciousness, showing one week flabby and soft, and the next singing with bright acidity and no fruit. As well, they will appear muted, disjointed and likely to throw the flavors of one component wine over another. Also like a pendulum, however, these wines will stop swinging, settle down and become not only more consistent, but with fully formed bottle bouquet and considerable mid-palate definition and complexity."

Usually, if a producer or merchant warns me of bottle shock issues, I wait to drink the wine for 2-6 months.

As for travel shock, there are importers, wine shippers, and drinkers who all report that their wine tastes flat after shipping, but that a few weeks sets the bottle to rights again. Is it the shaking? The temperature fluctuations? The agitation? Who knows. But I do think that it is kinder to your wine to let it sit for a while after it has been tossed around in a UPS truck. Usually, I wait 2-6 weeks to open the bottles I've received in the mail.

So if you wonder why there is such a long lag time between me happily reporting that I just got a shipment of wine and actually tasting the darn stuff, or wonder why I'm not guzzling my Cameron Hughes stash, it's because my wine is in shock--or at least I think it is. How about you? Do you believe in bottle shock? Travel shock? Any anecdotal reports to share?
Posted by Dr. Debs at 8:10 AM

I've heard of travel shock (or whatever you might call it). I always wait a while to let the wine settle after delivery. usually a week but it could be longer depending on my pace that week and the number of parties/get togethers. I'd be interested in more detail on the topic as well. It makes sense that the bottles get shaken around, go through temperature fluctuations, etc... and therefore need to settle down. But not being a vintner I never got educated in depth on it.

Problem is I can't leave it on the shelf that long. I drink it too fast to every really accumulate any inventory!

I think of bottle shock as the time after bottling until the wine gets back to tasting as it did before bottling.

After that some wines get into a "dumb phase" where they pass in and out of bottle shock - this seems to be a characteristic of wines that are considered "most age-able" - though there are plenty of age-worthy wines that I've never experienced dumb-ness with.

In our case (pun not intended) we will hold wines after bottling until after they get clear of their initial bottle shock - anywhere from a week to several months, depending on the wine.

It's still not clear why wines go into bottle shock in the first place. Bottling is actually not a "violent" activity, and inert gases are used to minimize contact with the air... so it's anyone's guess what the mechanism is!

It's funny that you mention this because I was just talking about this with someone at my office.

I have what seems like a large backlog of "work" samples that have stacked up in my cellar. A couple wineries have even inquired, not angrily but maybe anxiously, why I haven't reviewed their wines yet.

I too find that if I open wines the day they arrive from UPS, they don't show as well as they might later. That's one reason that I asked for two bottles per wine, and also why I tend to wait at least a week or to before tasting.

Hi, Joel, Brian, el Jefe, and Lenn. Interesting discussion, and I'm not sure what to add except that I, too, am interested in understanding more about WHY this happens. Ameline at UCDavis back in the 40s attributed bottle shock to overexposure to oxygen, but as el Jefe says, most modern wines aren't subjected to that so it's a mystery as to why they still seemed shocked--although nearly every winemaker I've talked to describes the difference between barrel and bottle that el Jefe suggests. And I'm with you, Lenn. I'd rather wait to review samples for a view weeks at least to give the wine the best possible chance of performing well.