Drinking at the Abbot's Table 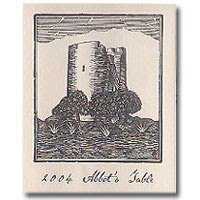 Owen Roe O'Neill was an Irish hero who fought against Oliver Cromwell's English army in the 17th century. This heroic figure inspired Jerry Owen and David O'Reilly, the partners who bring us Owen Roe and O'Reilly wines.

Owen Roe is based in the Willamette Valley of Oregon and they make stunning wines, especially red wines, under the Owen Roe, O'Reilly's, and Sharecropper's labels. The Abbot's Table red blend is their most popular bottling. Falling in the middle of the Owen Roe/O'Reilly's price spectrum, it combines a good price point with a lush, complex flavor profile. I tend to pick up a bottle on release and drink them a year later, and of course I love the woodcut label.

Recently I opened up the 2004 Owen Roe Abbot's Table ($26.99, Mission Wines; available at many merchants for $20-$30) It was a very nice red blend of Cabernet Sauvignon (44%), Syrah, Merlot, Cabernet Franc, Zinfandel, Grenache, Malbec, Pinot Noir, and Counoise. It had a deep, rich, plummy color. When you opened the bottle, you were struck by aromas of cedar, plum, blackberry, and earth all of which developed as the wine opened up and softened. All of these notes were detectable in your first sips of the wine, with intriguing minty and herbal notes added in and a distinctly peppery finish. Even though I waited a year it was as till a tad bit disjointed, with the flavors not quite hanging together fully yet, but it was still plush and easy to drink as long as you gave it some air in a decanter or glass. But if you've still got a bottle, I'd wait another 6-9 months before opening it with some warm winter stew or a roast. Even though this was scrumptious, there are many red blends out there that drink well for less money, so I gave this good QPR.

The 2005 Abbot's Table has also been released, and CellarTracker drinkers seem to like this vintage just as much as the last, so if you can't find the 2004, you might want to pick the later bottling up instead. I already have, and its going to sit just where it is for another year before I open it up and taste it. See you next year at the Abbot's Table.