GaryV: from the Big Time to the Small Screen 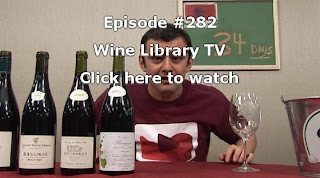 Set your Tivos, your alarm clocks, and your VCRs. Wine Library TV's Gary Vaynerchuk will be on Late Night with Conan O'Brien on Wednesday, August 1. Gary and Conan will share the stage with Ann Curry and Seth Rogen. If you've not seen Gary, play his recent episode on entry level French burgundies by hitting the button below. Trust me, it's worth it--but don't stick celery up your nose! OK, don't know where the embedded viddler has gone, but click here to watch the video or on the static image above if you are so inclined!

As the story about Gary's star turn on CalWineries points out, one of the reasons Gary is having such a huge impact on the wine world is because of the passion that his fans have for his Wine Library TV format and for the the information he shares with them. Gary is most definitely a Guy Without a Tie in the all-too-often stuffy world of wine, even if he is called a "wine critic" in the Conan O'Brien press release. I think it's safe to say "wine critic" will have an entirely new connotation after Gary's appearance.

Check local listings for showtimes, and once again hats off to Gary. First Time, now TV. Gary, you're bringing non-mainstream wine coverage into the spotlight. I predict a Food Network contract is being drawn up for your consideration at this moment. In my opinion, you are ready for your closeup.
Posted by Dr. Debs at 7:16 PM

Hey Dr. Debs- I heard about this yesterday. I have to remember to DVR it! I'm so curious to see how he does and more importantly, the buzz that follows it.

Hi, Erika. I'm wondering what the buzz will be too. But I'm really wondering which savvy TV producer will nab him for wine commentary. Today? Rachael Ray? Food Network? This is just going to get better and bigger, I think.

I agree. I just setup a little poll for people to predict his performance on my blog if you want to check it out :)

uh, is he drinking wine or mainlining espresso?

I'm sure he knows his stuff, but i couldn't endure more than about 90 seconds of that.

In other words, he'd be PERFECT for Rachael Ray!

Thanks for the poll, Erika. And Anonymous, I know what you mean. You probably don't like reality tv, do you? I take Gary in short bursts because he makes me feel old, grey, and easily irritated. But Emeril and Rachael also make me hysterical and not in a good way (although I like her mag), so there are lots of folks who like this sort of thing. I think GaryV is especially good at breaking down the wine snob stereotype. He's most definitely NOT a snob. So for that he gets my full support!

I missed! Has anyone here seen it??

Agent Red: no, I don't have a tv signal where I am. I'm sure the internet will be buzzing this am. Did you check Wine Life Today and see who posted on it?