Nobody Expects the Spanish Inquisition (or a Poor QPR Zin) 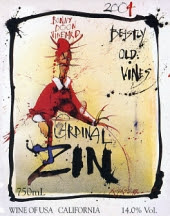 Now that it's summer, our grill has been fired up and we are in full BBQ mode. One of the wines that goes well with spicy, tomatoey BBQ is zinfandel. We opened a bottle of zin to go with some superb pulled chicken sandwiches. Boneless chicken thighs were given a spicy rubdown and then grilled before being shredded and immersed in a tangy, molasses-enriched homemade sauce and piled on a roll. With coleslaw and some bread and butter pickles on the side, it was the essence of summer eating.

With our pulled chicken sandwiches we had a Bonny Doon Zinfandel made back in the day when Grahm was still doing wacky labels and hadn't gone all biodynamic on us. How could you resist this label? It made me think of Monty Python and I could just picture it sitting on a casual summer dinner table. The 2004 Bonny Doon Cardinal Zin ($16.99, Trader Joe's; available from many merchants for between $12 and $24) was a dark ruby color when it was poured. There were aromas of pepper and berry, but these were a bit muted for a zinfandel. Loads of berry flavors--blackberry, blueberry--and low levels of spiciness were accompanied by a distinctive peppery edge. At a relatively low 14% alc./vol., this was not as plush and velvety as many zinfandels are these days, but it lacked the spiciness of the best zinfandels. While the wine was certainly drinkable and had some moderate zinfandel characteristics, its relatively high price point might make you feel that you've paid to much for this wine once you've brought it home from the store. There are other zins out there that deliver more for far less money, so I'm calling this one a poor QPR wine. If you can get it for $12-$14, you may find this is good QPR, however.

I feel like I've been a bit jinxed lately, stuck in the poor QPR department as I go through a bunch of wines bought on impulse because I liked the label, or had never tried the producer, or was trying out a new varietal. It's all ok by me, because that's how you learn about wine and your own palate. But I'll be glad when I break this streak of bad wine luck!
Posted by Dr. Debs at 8:06 AM

You have to go to Dry Creek Road, the land of Zin. Nalle, Unti, Bella, Ridge (Lytton Springs location), and so many more great Zin-focused wineries there to visit. You'll be in Zin heaven (if not QPR heaven -- the wines can be a tad pricey, though most of the tasting rooms offer gratis pours).

I agree with jb....Dry Creek Zins rock, I'm partial to Mauritson myself, though like Bella and Ridge as well, but Mauritson is a bit more budget friendly.

Sorry for your unlucky streak, I hate when I get in a rut of wines I'm not pleased with!

You and Farley are on the Zin kick today. Yes, I will agree, a great wine to match up with the grill. Your chicken sounded lucious! Looking forward to a few more recommendations on the Zin's so the next time I fire up the grill, I will have the perfect wine to match.

Our weapon is fear - fear and surprise. Our TWO weapons are...

Actually, that drawing is by Ralph Steadman, who was for years the illustrator for Hunter S. Thompson - most famously Fear and Loathing in Las Vegas. But I agree it is pretty Pythonesque! And I'm sorry to hear the Cardinal has slipped a little...

Hi everybody. I love Dry Creek zins, my favorite at the moment being the Dry Creek Vineyard Heritage zin at under $20. I'll have to do a zin pilgrimmage this summer and hit some of the wineries that JB and Sonadora mention. Wine Deb, the chicken is FAB, I highly recommend it. And El Jefe, I'm a closet zinaholic, too. Just don't ask me to taste them for 3 hours straight :).