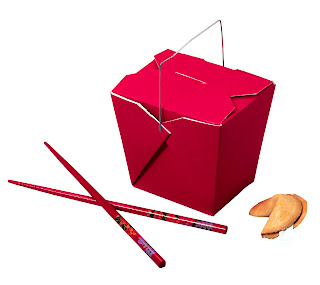 Takeout is a tradition that goes back at least as far as ancient Rome. But during the holidays, there is no happier tradition in my opinion. To fully enjoy it, it's imperative that you stock up on specific kinds of wine and have them in the cabinet and waiting for your next needy moment. In my house, we don't like to spend more on the takeout wine than on the takeout itself--despite Dean & Deluca's latest and best efforts to get me to spend $395 on six bottles of wine because "nobody drinks fancy wine every day." Well, I think we can do a lot better than that, don't you? For far less than $395, here are some wines that go great with your takeout, and will leave you lots left of dosh left over for holiday shopping.

Riesling--This is what you need for incendiary takeout, such as hot Thai curries, vindaloo, and raging Szechuan cuisine. Go for something dry or off-dry for best results. There are lots made in the US and Australia that are not terribly expensive, or you can splurge slightly and get a bona fide German riesling kabinett like the 2005 Max Ferd. Richter Graacher Himmelreich Riesling Kabinett($16.95, Chronicle Wine Cellar; available elsewhere for between $15 and 27) It had full aromas of peach, peach blossom, and apple with a silky texture and flavors of apple, citrus, peach, and flowers that were distinctly off-dry.

Viognier--This is what you need for everything Asian that is not searingly hot, or spicy little chicken wings. If you like noodle bowls, pad thai, and mu shu, this is the wine to have on hand. Try the 2005 Domaine de Gournier Viognier, a producer recommended to me by Dr. Weingolb. (I got this as a sample from domaine547, and you can get it there for just $10.99). It was drier than most domestic viognier, with subdued citrus and apple aromas, and a predominantly apple palate.

Red Blends--These are vital for your pizza delivery nights, or for coming home to after driving through In-N-Out Burger. Blending several red varieties helps to keep the wine soft, affordable, and relatively inexpensive. There are lots of earlier reviews for red blends on the site, but we just enjoyed the 2004 Peterson "Zero Manipulation" red blend and highly recommend it for your house red this holiday season. ($12.49, WineQ) It is a carignane-based blend with additions of zinfandel and mourvedre, and it tastes a bit like an Italian red. High-toned red fruits (cranberry, pomegranate) are present in both the aromas and flavors. A bit of black raspberry is in there, too, if you reach for it. Nice acidity, not too much tannin--in short, a great food wine.

Lightly Oaked Chardonnay--Good with any bucket of fried chicken, or the rotisserie chickens from the supermarket, a lightly oaked chardonnay imparts enough richness to stand up to the bird, whether fried or roasted. One that we liked recently was the 2005 Egret Chardonnay. ($14.99, WineQ) This wine had rich aromas of vanilla and pear, with touches of white flowers. There were flavors of creme fraiche, apple, and pear with a touch of Mandarin orange at the very end. This was a creamy, slightly oaky chardonnay that paired well with food.

Sparklers--With everything else, from subs to salads, why not open an inexpensive sparkling wine? We had the NV Zonin Prosecco the other week, and it was a terrific bargain. ($5.99, Trader Joe's; between $5 and $9 from other merchants). This was the color of pale toast, and had aromas of lemon, bread dough, and apple. Lemon and white grapefruit dominate the flavors and produce a very light, refreshing wine that is great value.

Remember, this is supposed to be the season of joy. Put that cookbook down and get some takeout. There's plenty of time to make fricasee and beef daube later. After the packages are wrapped.

I like your suggestion of Viognier with noodle bowls. Just thinking about the combination of flavors and mouth feel makes me want to go out tonight and try it!

I would suggest the sparkling wines with fried chicken, especially one with some acidity. The bubbles and acidity compliment the fat in the fried chicken. I especially like a spritzy Vehno Verde.

Heh, I just opened a bottle of inexpensive Viognier last night, randomly wondering if it would taste nice with the brie I was snacking on (it didn't), and I thought to myself "man, I'm going to have to pick up some Chinese takeout tomorrow night to drink this with."

Wish I had read this before I dug into my Pad See Ew tonight. If I had, I definitely would have picked up a Viognier on the way home to have with dinner.

Orion Slayer, you're right--it's a mouthfeel issue, too, with the viognier and the noodles (or anything made with coconut milk) because of that slightly silky thing that viognier has going on. Like to be on the same wavelength, Wine Scamp, and next time Pad See Ew calls, Eddie, get thee some Viognier!

A reader, Geoffrey, sent me this addition in an email, which I post here with his permission: "A crisp New Zealand sauv blanc is also perfect with many of these types of takeout! The Brancott (normal, nor reserve) is a great value and easy to find."

That wine would be perfect. Thanks for the suggestion, Geoffrey!