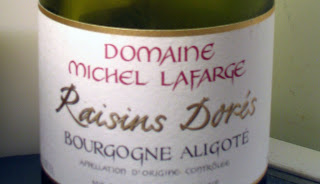 I'm down to the final three grapes in my pursuit of membership in the Wine Century Club, the organization devoted to promoting rare and unusual varieties. I've had a dozen rare grapes since January, and today's grape is less rare (it's actually the 4th most planted grape in the world) than it is simply one I've not gotten around to drinking before.

Aligoté is a French variety that is used to make Cremant de Bourgogne. It's known for its fresh acidity, which some people find overwhelming. I like how bracing the wine is, and how food friendly it is. It's also versatile. Aligoté is used as the base for Kir cocktails (named after the one-time mayor of Dijon), which are made with a mixture of cassis liqueur (modern types use blackberry, raspberry, or even peach liqueur instead) and chilled wine. If you use sparkling Cremant de Bourgogne instead of still Aligoté, it's called a Kir Royale. So buying a bottle of Aligoté can take you from cocktails to dinner effortlessly.

The 2004 Michel Lafarge Raisins-Dorés I had was very pale in color and had aromas of apple with a nutty edge. ($14.99, K & L Wines; available elsewhere for $14-$22) The wine had a medium-bodied feeling in the mouth, but lots of crisp acidity in its predominantly citrus flavors. I tasted white grapefruit and lemon pith, as well as a pineapple note as the last of the wine slid over my tongue. I can certainly see why the acidity wouldn't appeal to everyone, but I don't understand why this is relegated to secondary grape status in Burgundy. This is an interesting variety, and should appeal to anyone who likes Sauvignon Blanc, and is looking for a good QPR choice.

Because of Aligoté's acidity and its versatility, it can find a mate with a lot of dishes. One night, I had it with wok-seared scallops with a tangerine sauce, and the acidity in the wine was great with the fresh vegetables and the tangerine juice and cut nicely through the richness of the scallops. The next night, I made Kir cocktails while I was cooking up one of Maya Kaimal's chicken curries (I made the chicken fry curry in her first book Curried Favours, but it's not online; if you want to try her style of Indian cooking, give her Chicken Masala a try). I just kept on sipping Kir cocktails right through dinner, and they went well with this Indian dish. With the blackcurrant liqueur in it, the wine had a soft sweetness that was just right with the aromatic spices and slightly spicy jalapeño notes in the curry.

If you love Sauvignon Blanc you might find Aligoté a nice change of pace this summer. And its versatility makes it a good wine to have on hand for impromptu Happy Hours at the end of a long work week, too.

I would never have thought Aligote was so widely planted. I had a stunning experience with a de Villaine Bouzeron but I have avoided trying other Aligote, worried it was a one-off success. Hats off to you on that wine century club attempt - I have been inspired to follow in your shoes...

I as well have been inspired by your documentary on your last few varietals. I'm only in the 40's though and have a looooong way to go.

Glad you two are started on your own Wine Centuries. I think it's a great way to increase your wine knowledge, and experience. I've learned so much just in the last 15 wines I've had, and left to my own devices I would have hovered in the 60s for ever. Good luck to both of you, and I'm looking forward to reading about your experiences.