Overwhelmed by Wine? You're Not Alone. 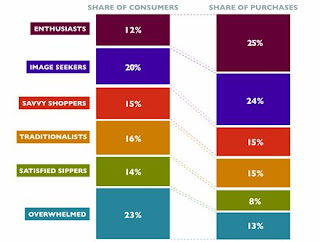 If you think you are the only person in America who is overwhelmed by wine, think again. Wines and Vines' Tina Caputo revealed that 23% of 3500 wine drinkers surveyed feel as you do, according to a study commissioned by Constellation Brands and released under the name "Project Genome."

Why are people overwhelmed? There are too many options in the store, they don't know what to buy (so they pick the label they like best), they can't find information in the stores to help them that is easy to understand, they can't find anyone to help them make the decision, and if the information they get is confusing, they walk out of the store without buying anything. This may explain why the 23% of those surveyed who fit into the Overwhelmed category bought only 13% of the wine consumed.

Contrast this pattern with the group that had almost precisely the opposite profile in the survey: Enthusiasts. The Enthusiasts represented only 12% of those surveyed--but bought 25% of the wine. Enthusiasts entertain at home, think they know something about wine, are relatively affluent, browse wine in stores and in magazines, are influenced by ratings, and most of their wine costs over $6. (who the hell is buying most of their wine for under $6? If this is you, I want to meet you.)

Jose Fernandez, Constellation's CEO, concluded from the study that "We've under-communicated to these [Overwhelmed] consumers," he said. "Increasing per capita consumption in the Overwhelmed category is our biggest opportunity… If we do nothing, today's Overwhelmed will be tomorrow's Overwhelmed." Fernandez blames this trend in part on the wine industry's tendency to hire Enthusiasts, who can't empathize with the Overwhelmed. Constellation's head of consumer research, Leslie Joseph, concurred and said that "We need to do a better job as an industry of [sic] helping these people understand what a wine's going to taste like."

I hate to be a contrarian, but I totally disagree. First, there are two categories where I think there is much more potential for growth in wine sales: the 15% of Savvy Shoppers who like trying new wines and could probably be persuaded to be even more adventurous; and the good old Enthusiasts who are already buying a lot of wine and will probably only continue to buy more. Second, I don't think Enthusiasts are to blame when it comes to a failure to reach the Overwhelmed. If someone is overwhelmed by wine then there are probably a lot of factors contributing to the issue that no one--no matter how clearly they communicate--is going to be able to surmount. At least not in a 5 minute encounter in aisle 4 of BevMo.

Third and most importantly the Overwhelmed will not be made less overwhelmed if Constellation and other big brands start explaining more clearly how their wine is going to taste. Such tactics will only make the Overwhelmed even more panicky. I don't think people trust advertising when it comes to wine. Most people think the opposite: that the wine advertising is inherently not to be trusted. That's why so many people rely instead on supposedly unbiased, authoritative, points-based ratings, and why if they read 6 wine labels that all promise raspberries and crushed velvet fruit they leave the store in despair. The Overwhelmed want someone else--someone not making and selling the wine--to tell them what the wine tastes like.

So is there a way to help the Overwhelmed, send them armed and ready into Wine Warehouse to face the Sauvignon Blanc aisle, and point them in the direction of wine enthusiasm rather than wine frustration?

It's called the Internet--and it's less scary than a wine store because you can go there in your pajamas. Type the name of a wine you've seen in a store or on tv into a search engine, and you will get information. Will you get too much information? Of course, but you have to let it wash over you and hold on for dear life to the few bits and pieces that float by that make some sense. This is how I feel when I ask someone to explain baseball. Gradually, you will find that more and more pieces "stick," and you will feel less overwhelmed when you go into the wine store to make your purchses. You may even find information in your searches that comes from Enthusiasts who run wine blogs like this one and at least try not to be too scary. When you do, you might get hooked on this wine malarkey and turn into an Enthusiast yourself.
Posted by Dr. Debs at 9:14 AM

It would also help if the people in the wine stores weren't generally pompous condescending arses.

Thanks for pointing this survey, it poses interesting questions. I agree with your conclusions that the answer is not for the Big Brands to "educate" the Overwhelmed.

As a wine newby, maybe it's a good thing I can't pick out the "raspberries and crushed velvet fruit" in the wines I drink. What kind of discriptions do you think would be the most beneficial when I talk about a wine on my wine blog? Can you think of wine bloggers (yourself included) who do a good job of describing wine so someone in the Overwhelmed category could get a good idea whether they'd like a wine or not?

My name is Shannon and I'm the editorial assistant at Foodbuzz.com. Following up on a recent email invitation to be a part of our newly launched Foodbuzz Featured Publisher program, I just want to reiterate that I am very impressed with the quality of your posts. I would love to send you more details about the program, so if you are interested, please email me at Shannon@foodbuzz.com.

I was lucky enough when I was at UC Davis to take a wine marketing class and one of core classes.

These statistics were a huge part of the classroom instruction.

The big question was who to market your wine too with these numbers.

The concensus was the up and coming wine drinkers who seemed to be more willing to try new things and spend more money per bottle.

Hey Dr Debs
I read the article on wines and vines the other day and had a post in the works too. I came away with some of the same conclusions that you did too although I think the largest growth opportunity is for the satisfied sippers. Granted by their definition they are "satisfied" but with more information they may realize that a fairly unknown varietal like Arneis is pretty close to Pinot Gris and could provide more enjoyment for them. I think Savvy shoppers would probably find this out on their own.

Also I wonder who the heck is buying $6 wine, except for those buying 2 buck chuck and wines on mega discount. And I think that studies like this one in the near future need to redefine their categories of what price range Premium and Super Premium encompass.

All in all, I think it was a pretty cool study but the wine conglomerates may want to take a closer look at the findings.

Hi Debs - I am so glad to hear I am only buying 25% of the wine, I was a little worried I was closing in on 35-40%...GWU6$? GWU12$ was challenging enough! Thanks for sharing this one. While I agree there is more potential for growth in wine sales elsewhere, you have to remember who commissioned the study - constellation is not interested in the Savvy Shoppers and Enthusiasts, are they?

I think you have to have some knowledge before you can go to WE. Otherwise you are at the mercy of the scores. And if their taster and you have different likes, you will not have a good experience with WE. (Note that WE, WS and Parker scores vary!) One man’s trash can be another man’s treasure.

The surveys do provide information. People want to know more than they currently know now or they wouldn’t read our blogs, or subscribe to WE, or Mr. Parker. A little knowledge can help these folks when they are ready to learn.

But isn’t the survey telling the wine blogging community what it already knows? The trick with wine is that the market is so fickle. There is very little brand loyalty with wine. Sure there is the public that buys Yellow Tail because one year tastes like the other. But most go in and look for the animal on the label that they have the most affinity with. They know red wine, white wine, less than $10.00 (they don’t want to look stoopit for spending too much for a bad wine) and they think the boxes in the front are where the bargains are found.

There is a big, wide world out there. Dear blog reader…look for a good wine store, find tastings in your area, get out there and get your feet wet! That’s what we are doing! You cannot learn about wine or life sitting in an ivory tower!

Sorry that work has kept me from responding to these great comments until now. I found myself nodding along to most of them, and thinking about what interests most of us here in the comments section: how to better help those who want to learn more--and not be at the mercy of the scores--do so. Taster A is right, there's nothing like experience and you just gotta get out there and try, knowing that you are going to be disappointed some time. And OrionSlayer, I think you try to write the kind of posts that would have helped you when you were first starting out. That's what I do. I just write the kind of posts I want to read.

Good stuff, you hit the nail on the head. This is a topic that I think about quite a bit (I touched on it as well in a previous post).

I think the wine blogging community needs to remember that we're writing for these people - and with 7,000+ wine brands (in the U.S. at least) to choose from, it isn't any wonder why the wine field is more like mine field for those consumers!

Now if only there was a service that enabled wine enthusiasts to automatically provide wine recommendations to their overwhelmed friends... ;-)