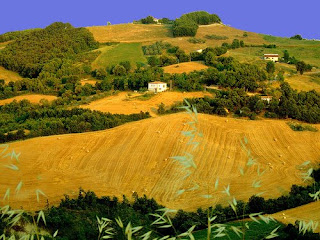 Molise is one of Italy's smallest wine-producing regions. Tucked into the shadow of the Appenines, and with a small Adriatic coastline, Molise seems to have been exempt from the passage of time. Steep mountains are painted in mezzotint colors that pop against deep blue skies. Ancient abbeys and monasteries cling to peaks and overlook sweeping valleys where people have lived and grown grapes since before the Romans came. (photo I colori del Molise by catwoman_mol)

This month, I'm going to be focusing on Molise and its wines. Sometimes, people lump the wines of Molise in with the wines that come from their better known neighbor to the north, Abruzzo. Since 1963, however, Molise has been its own province, and it seems only right to consider their wines on their own merits. Located just below the calf of Italy's boot, Molise and its wines have been relatively overlooked by tourists and consumers outside Italy, which is a shame because it is drop dead gorgeous if the pictures are to be believed. If the wines are half as delicious as the scenery, I am in for a treat. 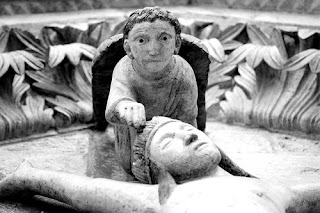 Molise is steeped in history, too, and is a dream come true for people who love the past. Larino, for instance, has a colosseum that predates the one in Rome. Home to the Samnites, the region was invaded by the Romans, the Goths, the Lombards, the Saracens, and the Normans in turn. During the medieval period, grand cathedrals and impressive religious houses were built in Molise, and a love of learning became a hallmark of the region's culture that persists to this day. (photo Molise sacro by Megasoma)

Though Molise's wine history stretches back so 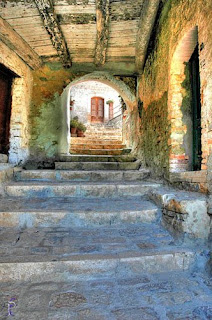 far that Pliny the Elder wrote about it in the 1st century, it can be hard to find modern examples of the wines in the US and most of Molise's wines are consumed in Italy. Recently, the wine firm Di Majo Norante has imported more Molise wine into the country, and if you've had wine from Molise you have probably had one of their bottlings. This month I'll be trying a Di Majo Norante red wine, but I'll also be opening up a white wine from the Terre degli Osci IGT. And I still haven't given up hope that I'll get my hands on a dessert wine from the area. While the wines may be hard to find, they can represent excellent value when you do, since the region doesn't conjure up the wine cache of Tuscany or some of Italy's other well-known growing areas.

If you have any particular suggestions or tips about Molise wines that you've enjoyed in the past please let me know. And if you've been to Molise, tell us what you think of the region in the comments below. After seeing this pictures, I'm itching to get on a plane and go exploring. (l'ingresso medievale by pinoperrotta)
Posted by Dr. Debs at 7:34 AM

Email ThisBlogThis!Share to TwitterShare to FacebookShare to Pinterest
Labels: Molise

I can't wait to hear more about wines from Molise as I have never had or really seen any myself.

Please try to get a bottle of Di Majo Norante Contado 2003. It's delicious! Decant for 2 to 3 hours.

Me too, Dr Debs: After seeing these photos, I'm itching to go!

Isn't it amazing?? A whole wine region that goes back to ancient times and we aren't familiar with it. Just goes to show you! Pat, I do indeed have just that wine, but not that vintage. I'll be trying on 04, but I appreciate the decanting tip. Will do and let you know how it turns out here on the blog in a week or two.