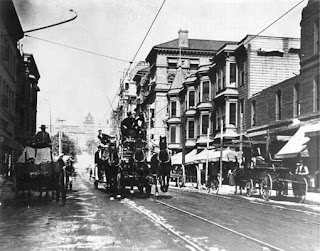 I spend lots of time in libraries and archives. I thought it might be fun to share some of the information I pick up about wine history along the way.

Imagine yourself in Los Angeles in 1906. The streets would have looked like the one to your left, with an electric tram, horses and carriages still on the streets, colorful awnings,and low-slung brick buildings. (Los Angeles street scene from 1906, courtesy of the LA Public Library and LA Fire Department Engine Co. No. 3)

While walking along, readers of this blog would be scanning the stores for wine. Where could you have purchased it in 1906? One option would have been the Crescent Wine Company, established in 1890 and still serving up wine and spirits, as well as olive oil and bottled water, to Los Angeles residents after the turn of the century. Located downtown on West Seventh Street, the company's motto was "Quality like Truth commends itself." Their 1906 price list proudly stated: “We do not keep nor offer for sale any imitation goods, or goods bearing counterfeit labels, and every article in this list is of irreproachable quality and even the cheapest goods quoted are choice.” Truth in advertising--and labeling--was an issue back then, just as it is now.

What the Crescent Wine Company meant by that 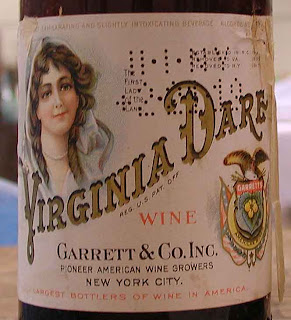 statement, however, would not pass muster today. They sold California wines in bulk under the categories of Claret (both "Table" Claret and "Old" Claret) and Zinfandel, but also advertised California Burgundy, California Hock, California Riesling, and California Sauternes. The price? Well that ranged from 50 cents to $1.50--a gallon. You could get your Claret in a quart bottle for an extra 10 cents, and when you brought the bottles back for a refill you got a 3 cent credit. Recycling, 1906 style.

Name-brand, bottled wines were also available, including Italian-Swiss Colony Tipo Chianti; Inglenook Sparkling Moselle, Burgundy, and (eek!) Sparkling Sauternes; Cresta Blanca sparkling wines; Paul Masson; and Champagne from Coste-Follcher, Mumm's, Veuve Clicquot, and Moet & Chandon. And, for those of you reading this from the east coast, the Crescent Wine Company also sold bottles of wine produced in your neck of the woods, including Virginia Dare wine (65 cents a bottle) and Concord Port. (image from bottlebooks.com)

Those of you who know about the 19th and early 20th century may also know that medicinal "tonics" (most of which were laced with opium, cocaine, and other potent substances) were hugely popular. Crescent Wine Company sold its own medicinal tonic, called "Tone-up Port." They described it as a "perfect, all the year around tonic and nutritive for restoring debilitated conditions. A perfect food and tonic combined. As an appetizer it has no equal; invigorates and tones up the whole system; makes rich, red blood, and is especially recommended for building up “run-down” constitutions." What was in the bottle was a carefully-guarded secret, but they offered free local shipping on 6 large bottles (which cost you $4).

Finally, the cocktail was coming into its own around 1906, and mixed drinks were all the rage. Not to be left out of the fun, the Crescent Wine Company included a number of "wine cocktail" recipes in their 1906 price list. My favorite--and a perfect follow-up to Wine Blogging Wednesday #45's Riesling theme--was this recipe for Rhine Wine Lemonade:

Coming in a close second was the California Wine Cobbler:

"A large bar glass half full of ice; ½ tablespoonful of sugar, juice of 1 orange, 1 wine glass California wine. Stir well, fill up with ice, dash with claret, dress with fruit, serve with a straw."

There was something strangely familiar about this price list, and it reminded me of surfing the web and browsing wine selections at local stores like domaine547 and Wally's, reading their advice about how to serve wine, and dreaming of making a big purchase. Despite the ways in which the experience was quite different from today, what I was most struck by were the ways in which buying wine from Crescent Wine Company seemed strangely modern with its recycled containers and free shipping offers. It made me think that someone from 1906 would be at home in our world of e-commerce and be delighted to shop for wine from the comfort of their own living room in 2008. It's fun to be able to imagine what it would have been like to buy wine in Los Angeles more than a century ago--although I'm not sure the Sparkling Sauternes would have made it into my cart.
Posted by Dr. Debs at 7:15 AM

A fascinating post, especially as I am both a wine and history buff. It is very eye-opening to read about the history of wine, to see how tastes, prices and such have changed over the years. I am reading The Billionaire's Vinegar right now, which talks about the alleged Thomas Jefferson bottle that was sold at auction. The books provides insight into the wine world during Jefferson's days and is very interesting.

I was especially interested in the cocktail recipes. My local library has one (count it) German cookbook from the 60s, and it includes the authentic (?) recipe for "cold duck." I remember it involves a mishmash of leftover sweet wine plus lemon juice, and then one peels a lemon into a long strip with a disc of peel from the stem at the end; this is draped into the punch bowl and somehow the disc of peel is meant to resemble a duck's head. You got me.

Great post. Don't hesitate to do another historic revelation as they come up. It's a great way to stay grounded: People then were the same as people today; they just wanted to drink good wine at a fair price.

Fascinating post. Believe it or not, some of your readers remember Italian Swiss Colony ("The little old winemaker, me"), Paul Masson ("we will not sell a wine before its time...") and others. The more things change.... Think of all the "tonics" and snake oils being sold today.

Wow. I love this bit of local history (and I thank you for being associated along the continuum of this history. You made my day!).

Nice post Deb! I always enjoy history and especially when they talk about what things cost! Speaking of cost, the wine prices down here are really climbing fast! I suppose we are really getting hit for transporation charges:(

Thanks for the positive responses. I think you can look forward to some more "vintage" posts. Nancy, I'm tempted to try the duck-head garnish just to see if it works!

Anyway, It's nice to see your blog

Thanks for sharing. Again

I received a great education from your site. I was searching the web to see if I could find anything about a "California Sauterne Souvenir" "Cresta Blanca" wine bottled in Livermore, CA (I'm guessing) around 1906. I have three unopened bottles of the wine discovered in an old abandon country store my wife's grandmother used to tend. The wine label is of a souvenir for the Paris Exposition in 1889, Chicago Worlds Fair in 1893 and a list too long to mention stated on the label.