This is the second in a series of posts highlighting California family wineries. You might not be familiar with them--yet--but they produce wines that speak with the voices of this state's people, places, and history. They are worth seeking out. These posts will be longer than most posts on the blog, but I hope you will find them perfect for leisurely weekend reading and internet browsing. Have fun! To read the first post in the series, click here. Families today come in all shapes and sizes. They can include your children, your partner's children, friends from college, former neighbors who moved in when they lost their job and never left because they turned out to be great gardeners or cooks and therefore were far too useful to evict, cousins, grandparents, aunts, and uncles. They clump up in one spot over holidays, and stretch out in complicated diasporas that span the globe the rest of the time. They are kept together with passion, email, text-messages, and all-inclusive long-distance phone plans. Sometimes, they even include grapevines and pirates. (photo of Christian "the Pirate" Tietje courtesy of Four Vines Winery and FutureWorks)
I discovered one of these thoroughly modern families at the Family Winemakers of California tasting: the Four Vines Winery family of Paso Robles, Amador County, and Sonoma. The family started with Christian Tietje, a wandering chef who came to San Francisco from Boston in 1990, 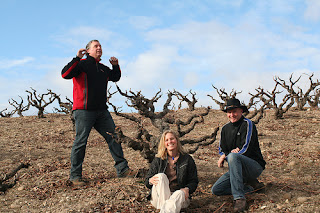 and fell in love with old vine Zin. In 1994, the family grew from Christian and Zin to include Susan Mahler (aka Sam), a pilot and earth scientist, who quickly fell for Christian, his Zin, and the backbreaking and absorbing work of tending vineyards. They moved to Paso Robles, started Four Vines Winery, and focused on making appellation-specific Zins and--at a time when this was a complete heresy--unoaked chardonnay. As the business grew, they needed help, and help came in 2004 in the form of Christian's childhood friend Bill Grant, who managed the finances and marketing for the burgeoning enterprise. Today the family includes tasting room wine pushers, crush slaves, cellar masters, keepers of wine, growers, pirates, bikers, and self-appointed "ZinBitches." Not to mention a growing mob of satisfied consumers and fans. (photo of Bill, Sam, and Christian with their grape-children courtesy of Four Vines and FutureWorks).

Together, the Four Vines family wanted to introduce some fun into wine, and to blow the cobwebs off what (especially in the 1990s!) was becoming an all too stultifying and stuffy wine culture. They gave their wines names like "the Biker," "Maverick," and "the Heretic." They started holding Zinfandel Festivals with pirate themes long before Johnny Depp had even thought of donning an eye patch. They were among the first to appreciate the sensory pleasures that came from making Zin from grapes that came from old vines. And they loved seeing how Amador fruit differed from fruit sourced in Paso Robles, or Napa, or Sonoma.

There is an old expression--"the genius of the place"--that was used in the 18th century to describe the spirit that inhabited a particular spot. Architects and landscape gardeners were supposed to try to capture the genius of the place in whatever work they did. The Four Vines family seems to have applied this concept to their winemaking, and the results are stunning. They produce rich, complex wines that have an intriguing silkiness on the palate. Every zin has a different cascade of flavors and aromas that evolve from your first sniff and sip. And the other wines that they make are truly memorable examples of the varietals that go into the bottle.

What follows are my brief tasting impressions of their line of wines. You are going to be hearing a lot about them in the upcoming months, based on coverage the winery has already received this year from Wine & Spirits and Wine Spectator. Buy the wine now if you want it, because the 2004s are nearly sold out. Or, save yourself the aggravation and join their wine club, thereby insuring that you will get your required stash of new Four Vines wines as they are released. The first 2005 reds will be released in late May, so circle this date on your calendar and check their website so you aren't disappointed because, yes, they, too, are going to sell out. After that, piracy will be your only option.

Prices below are those suggested by the vineyard. Click on the name of any wine to be directed to merchants in your area or online who might be offering the wine at higher or lower price points.

2005 Four Vines Chardonnay Naked Chardonnay ($14) This excellent unoaked chardonnay, made with Santa Barbara County grapes, has striking butterscotch and soft pear aromas that are followed up with fresh pear and citrus flavors. Juicy, easy to pair with food, and excellent QPR.

2004 Four Vines Zinfandel Old Vines. ($18) I doubt that you could fine a better Zinfandel at this price. It has a superb balance of fruit, spice, and acidity with warm aromas and flavors of blackberry, clove, and pepper. This wine will improve further with a little time in the bottle. Excellent QPR.

2004 Four Vines Zinfandel Biker ($20) This rough young zin from Pas Robles should settle down and shed some of its acidic tannins with a bit more time in the bottle. Its blackberry and pepper flavors and aromas are struggling a bit to come forward now, but all the structure and potential are there so give it some more time and it will be superb. 15% alc/vol. Excellent QPR.

2004 Four Vines Zinfandel Maverick ($20) Soft blackberry-toned fruit from Amador County, with 14. 9% alc/vol. I found a very good balance of fruit and spice, and lots of complexity as the two wove together. Excellent QPR.

2004 Four Vines Anarchy($30) This nouveau Rhone-style blend made with Paso Robles fruit has an infusion of zin that you can really taste. Made with syrah, zin, and mourvedre. Jammy red and black fruits, nice spice. Good texture and mouthfeel. Good QPR.

2004 Four Vines Peasant($30) Another wine made with Paso Robles fruit, this intriguing red blend is dominated by syrah and mourvedre. Soft and smooth blackberry fruits, touched with vanilla and cracked pepper. Good QPR.

These are wines that are full of the genius of the place, and the genius of the people who make them. You won't be disappointed with their wines, and you may find yourself behaving like a pirate and starting your own treasure chest of Four Vines wines.

Next Week: Brutocao Cellar and Vineyards

Another excellent profile! I'll look forward to what you think of Brutocao...we spent a lovely evening at their Lion's Den restaurant and our server was kind to give us a bottle of their Dolcetto as a congratulations gift since we were on our honeymoon. We are currently saving it for our first anniversary!

Four Vines has terrific wines and they are great and fun people. We have been reviewing and promoting their terrific wines for a few years. I can't say enough about these wines. My review of the 2005 wines will be posted soon. Stay tuned and get in line quickly because they are wonderful. - Ken

Welcome back, Ken and Theresa. They are terrific wines. Lucky you have had a sneak peak at the 05s and I'll definitely be on the lookout when you post those reviews. They were pouring the 04s at this tasting, but they sold me on this vineyard for sure. I'm going to join the Club, since this qualifies as one of those vineyards that I want to join on their journey. They're going nowhere but up!