Decanting is one of those subjects that has far too much mystery associated with it. When to decant, why to decant, and how to decant are some of the most pressing issues facing you when you think, just as you stick the corkscrew into the cork, that maybe you should dig in the cupboard and find that decanter you've had for years and not used.

Today, I'm going to talk about decanting young red wine. Young reds can really benefit from decanting because the process adds oxygen to the wine. This is what happens slowly over time as wines sit in the bottle, and while decanting compresses the time frame it can't exactly duplicate all the complex changes that come with cellaring a wine. Nevertheless, if you've got a red wine that you can't wait to drink, decanting may bring out some of the wine's character that you would have missed just pouring it into a glass.

What follows is a photo essay with captions and tasting notes for my decanting experiment. My subject was the 2004 Bonneau Cabernet Sauvignon Sonoma County ($31.99) that I received as a sample from WineQ. You definitely could have had this wine right out of the bottle if you like your cabernets to have substantial grip from tannins, but I wanted to soften it up a little bit, so decanting suited my purposes perfectly. 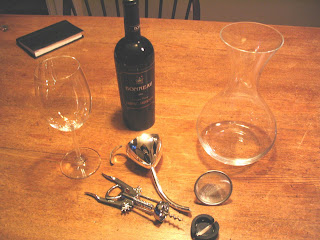 Step #1: Assemble equipment. If you're going to do this, it's helpful to pull all the stuff you need out of the drawers and cupboards before you begin, and work on a clear flat surface. You need a wine glass, the wine (of course), the decanter (check for dust if you haven't used it for a while!) the filter, the foil cutter, the corkscrew, and a funnel. Because this is a young wine, you don't need the filter, so you can move that to the side. I got this decanter/funnel/filter set from Wine Enthusiast this Christmas, and I love it. It's affordable (currently on sale for $39.99), not too huge, and has everything you need to perform decantations in your own home.

Step #2: Taste the Wine. This is the biggest 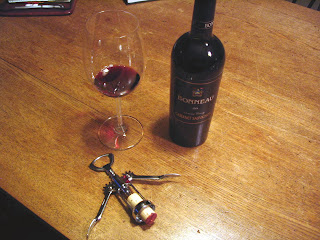 mistake people make, I think. Just as you don't want to salt food before you taste it, you don't want to decant a young wine before you've tasted it and seen what it's all about first. Maybe it doesn't need decanting. Maybe it needs twice the time you thought it did. You'll never know until you try it, so pull the cork, pour yourself a it, and see what you think. When I opened this cabernet, it tasted kind of tight--which is wine speak for a wine that has flavors that seem compressed and so coiled together that you can't easily distinguish one from the other. This is a classic description of a young red. I tasted some blackberry and a bit of baker's chocolate, but suspected that there was a lot more going on. So, I decided to decant it. 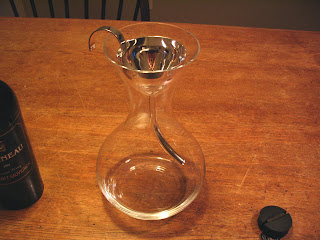 Step #3. Decant the Wine. First, you have to get the funnel into the decanter. You can use any kind of funnel that you want that isn't reactive--i.e., don't use an aluminum one, since that can react with the acids in the wine and impart a metallic taste. If you have a wine funnel, like the one pictured here, it may angle the tapered end towards the side of the decanter. That's so that the wine hits the glass, and slowly slides down into the globe of the decanter, maximizing the infusion of oxygen into the wine.

Here's the same decanter, filled with wine, and you can see 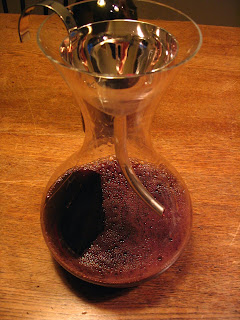 from the frothy purple foam on top that the process has worked. That foam (which will quickly subside) is the sign that the wine has taken on some oxygen. Now, all you have to do it wait.

Step #4. Check the Wine. Between 30-50 minutes after you decant, go pour yourself another splash of wine. After 50 minutes in the decanter, I felt like the Bonneau was ready to strut its stuff. There were now pronounced aromas of plum, dark chocolate, and espresso. These aromas were present in the first taste of the wine when it hit your tongue, and as the wine passed through your mouth there was a nice, fresh lilt of cranberry that added freshness to the richer plummy, chocolatey flavors. The texture was smooth and silky, and the tannins were present but not overpowering. This was a fruity wine, but the more bitter chocolate and espresso notes held it in nice balance. I think this wine would develop nicely in the bottle, and I would consider buying a few bottles for short-term cellaring (ca. 1-3 years). 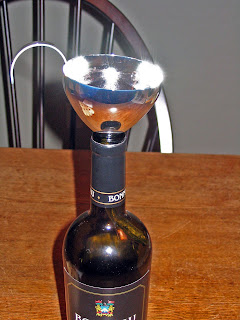 Step #5: Put Leftovers Back in the Bottle. If you've got wine left over, don't leave it in the decanter. Instead, put it back in the bottle, using the funnel to make sure it doesn't end up all over the counter. Use your favorite preservation strategy, and enjoy some the next night, too.

In a few weeks, I'll decant an old red--a nine-year old Australian shiraz that I know has lots of sediment in it from other tasting notes on CellarTracker. The basic technique is the same, but the reason for decanting is different and so there are a few important changes to the process. Meanwhile, find your decanter and give it a try with one of your wines. Track how decanting changes the aromas and flavors. You won't want to decant every wine you drink, but at least you'll have a better sense of which ones are worth the little bit of extra effort.
Posted by Dr. Debs at 7:43 AM

Good how to article. However, if I know I can't finish a bottle in one day, I would just decant enough for same-day consumption and leave the rest in the bottle thereby not exposing the wine to too much oxygen.

Thanks for posting this: I've been too late to join in some of the earlier discussions but I've been wanting to ask why people were bothering to decant '05s and '06s...makes sense though. I noticed yesterday that Wine Enthusiasts decanters are on sale too--there are some nice ones (some look pretty difficult to clean though!)

Thanks for another great how-to article for all of the newbies. I've tried decanting a little and your article helps me know more about what's going on and how I can improve the process.

I like the difference decanting makes in a red wine. It's interesting to make tasting notes before and after decanting.

great post. but I wonder about the funnel aspect. As a former homebrewer of beer, I know we used funnels, tubes, and the like in order to keep oxygen OUT of the beer before fermentation. The same is true when you pour a pint from a bottle or tap -- let it run down the side gently so not much oxygen gets in.

Thanks for the great comments. TasterB, a good rinse with hot water after the decanter is empty and before the residue glues itself to the decanter is one way to go, but there are specialty brushes, too, for more stubborn spots. I see what you mean, Rouge and Blanc, but I figure, hey, get the whole wine decanted, then preserve it over night. Saves cleaning the decanter twice. BF, I think the difference here is the "too much" qualification. What qualifies as just the right amount of oxygen for bubbly beer it seems is just the right amount for still wine, too. "Splash decanting" adds more oxygen quickly, but most prefer the gentle method, which (as the foam shows) does add oxygen--it's just a bit easier to control.

Very Interesting tips. I have seen decanting done before, but have never tried it myself; I will be trying it with one of my next bottles. Thanks for the good info.

great pics! Led me through the article very nicely.

Great article. I've put a link to you in my blog on decanting and young red wines. Thanks

Excellent article. Can you help me with a question? I have about 2 cases of reds from Italy, which are quiet young and decanting will really help. I was wondering if I can decant and let the wine breath for 15-20 mins, and put it back in a bottle and re-cork it with new corks and store it my cellar. This way, I will have wine to drink when I want to without decanting everytime. Will this cause any problem in degrading the wine for storage? Thanks!