Drinking Wine Before Its Time

Sometimes, you just gotta do it. You get a bottle of wine, you're dying to try it, you know it's probably too young to show itself at its best--so you open it anyway. We all drink wine before its time. What is important is to be able to drink it for what it is--a young wine--and to figure out what it will become if you give it some time to develop. 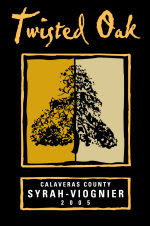 The 2005 Twisted Oak Syrah-Viognier ($24, directly from the winery) was just such a wine. I love syrah-viognier blends, with their spicy richness serving as a foil to delicate, often ethereal aromas of white flowers. I was dying to try it, and since I had two bottles on hand I decided to commit infanticide and drink one of them now. I couldn't wait.

What was it like? A teenager--all awkward angles and stuff that doesn't quite hang together. Yet. But who would want to be judged now on their 8th grade report card? So I kept careful track of its development as I drank it over the course of several days. I became convinced that in another 12-24 months this is going to be a bombshell of a wine.

The first night, I was struck by its dark, inky plum color and its huge nose of brambly berries and spice. Flavors of berries and pepper dominated, with just a bit of a lift in the mid-palate (that part of the wine's taste that comes when it rolls through the middle of your mouth). Nice, but it hinted at so much potential I didn't want to walk away from it yet. So I recorked it without any preservative, and left it on the counter overnight.

The next night, when I pulled the cork I found that the wine was already really opening up and developing as it got some more air. The viognier was much more prominent on the second night, with aromas of gardenia and jasmine dominant, rather than berries and spice. These syrah aspects were there, too, but the impression you had now was one of a spring garden, not a berry patch. The berries had become more distinctively huckleberry at the core, with the spice really coming through as you headed towards the finish line. Very good QPR, with its layers of fruit, flowers, and spice.

I liked this wine both nights, but the way that it bloomed in just 24 hours convinced me that it has great potential for short-term cellaring over the next 1-3 years. If you can't wait and have to open a bottle now, try decanting it or at least uncork it a few hours before you want to drink it. Like all teenagers, this deserves some time to grow out of its youthful exuberance and into a well-rounded and complex wine.
Posted by Dr. Debs at 8:51 AM

Hey, in 8th grade I was a straight-A student, all-state soccer player trying out for the varsity high school team while in Jr high, and pretty damn popular!

Well, in 8th grade I was a straight-A overweight geek who couldn't kick a ball in a straight line to save his life. Popularity? Ha! That came later, after the popular kids in 8th grade had burned out (no offense Joel ;-)

I dont suppose for a minute this is available in the UK... shame

Andrew, next time I come to the UK I promise to bring you a bottle if I can figure out a way to get it through in my checked bags! It's terrific--the 8th grader analogy not withstanding!