Checking up on Bonny Doon's Journey into Biodynamics 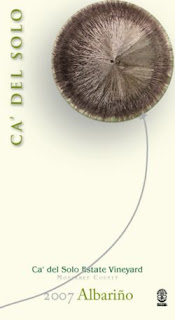 I've written before on the site about Randall Grahm's efforts to take the sprawling and eclectic wine enterprise that is Bonny Doon and turn it into a much smaller and focused operation devoted to biodynamic farming and exploring the potential of far fewer grape varieties. In my tastes of the results so far, this transformation has led to some very interesting and pleasant white wines. The reds are still a work in progress in my opinion, but the white wines are distinctive, fun, and out of the ordinary.

The latest Bonny Doon wine that I tried was the 2007 Bonny Doon Vineyard Albariño, a very tasty wine that was made using biodynamic protocols. ($17.00 in a wine club shipment; expect to pay $18-$22 through merchants near you. It's also available for $20 through the Bonny Doon website). The pale straw-colored wine had strong and unmistakable aromas of honeysuckle when you first unscrewed the cap. We have a Meyer lemon tree in the back yard, and the flavors reminded me of the slightly richer and sweeter flavors of those lemons with a bit of sea salt adding a note of interest. As you sipped the wine, it left a slightly bitter and intense flavor of grapefruit oil which made your mouth water for more. I liked this wines intensity and its trueness to the variety--in a supercharged, Californian way. Even though it was very good, I can only give it a good QPR designation because of the price. There are a lot of very good Spanish wines made with this grape that are less expensive. Still, if you like zesty, intense Albariños this is well worth checking out.

This Albariño would be excellent with fish or chicken tacos/fajitas, or with a Spanish dish like paella. We tried it with both of those options, and I was hard pressed to pick a winner. In the case of the chicken fajitas we had, the lime that was squeezed on the meat and vegetables paired very nicely with the Meyer lemon and grapefruit notes in the wine. With the paella, which we made with chicken, rosemary, shrimp, artichokes, sausage, and peas, the wine was flexible enough to pair with the many textures and flavors of the dish. And its freshness handled the rich saffron flavors of paella just beautifully. If you'd like to try to make a somewhat less time-intensive version of the famous Spanish rice dish, you can check out this recipe, but DO NOT follow the final cooking instructions--they don't work and you will have uncooked rice 45 minute after the dish is supposed to be done. Instead, follow the recipe up until you bring the pan of goodies to a boil after adding the stock. Then let it simmer, uncovered and without stirring, for 7 minutes. It will still be soupy at this point. Transfer the pan into an oven preheated to 400 or 425 degrees, being sure to cover the handle with foil if it's plastic. Cook it there for a further 15 minutes. You can sprinkle some more stock over the pan if the mixture seems too dry (check 5-7 minutes after you first put the pan in the oven.) Remove the pan, cover it with foil, and let it stand on the counter for 10 minutes. Uncover the pan and let stand for another 5 minutes. Even if you don't have a traditional paella pan, this method yields good results and you should get some of the coveted crustiness and caramelization on the bottom of the rice.

I'd be interested to hear what those of you who are drinking more recent vintages of Bonny Doon think about Grahm's efforts so far. And if you're drinking new vintages of the Pacific Rim or "Big House" wines, I'd love to know how those are faring too, since they are no longer made by Grahm.

I've been keeping up with the Bonny Doon new releases and liking them. The '05 Le Pousseur Syrah is dark and rich and spicy, like a Northern Rhone, and it's only $18. The new Cigare Blanc is a good buy for $22. I didn't care as much for the '07 Roussanne, but that's a tough grape to work with. I also liked the '05 Bien Nacido Syrah, but it's kind of pricy, at $40.

I've not tried any new Bonny Doon, but I have not been impressed with the lastest Pacific Rim Riesling. It was OK, but nothing I'd buy (had it at an industry tasting). Of course, I never tried it when Grahm was making it, so I guess I really can't compare anything at all. The "Big House" red, I think, is still a decent table wine. People seem to love it or hate it (at least they did when we carried it at our former shop).

The Pacific Rim single-vineyard Rieslings, now released from 2007 vintage, are among the best American Rieslings I have ever tried. And they are from NEW vineyards in Washington. I would expect many Pac-NW producers to aim to emulate them...

Wow. This was fascinating for me. I didn't like the 05 Cigare Blanc at all, and the Big House Red used to be one of my favorites but now I find it too grapey. Will look out for the Pousseur and the Pacific Rim and see what there is to see. Thanks to everybody for leaving comments.

I hope all is well with you. I have enjoyed reading your blog and find it to be very informative.

I started my own blog which focuses on traveling in the California wine countries:

I have also put together pictures I have taken over the past few years of various wineries, vineyards at my "Adventures in Wine Tasting" Photography Youtube site at: