An Italian Rosé--Perfect for Summer 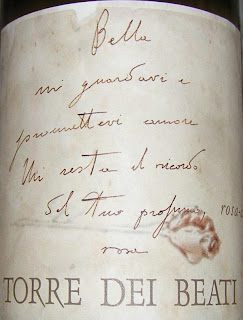 I probably shouldn't admit this in polite, wine-loving society but my records indicate that this is the first Italian rosé I've ever had that didn't have bubbles in it. I'm not sure how it happened, but you need to take this whole post with a grain of salt because I'm going to give you pronouncements in it that are based on my first experience with this kind of wine.

If this is Italian rosé, it's certainly not like rosé that I've had from France, and it even makes Spanish rosé seem pale in comparison. This was more like drinking a very light Gamay from the Beaujolais--which was unexpected, but turned out to be kind of fun in the food and wine department.

The 2007 Torre dei Beati Montepulciano d'Abruzzo Cerasuolo was a rich, throaty, and full-bodied rosé wine. ($16, Biondivino; available elsewhere for between $12 and $19) Made with the Montepulciano grape, it was a very dark rose in color, and had a slight bit spritz when it was first opened up. The spritziness disappeared, and there were pronounced strawberry-rhubarb aromas and some wet stone. The strawberry-rhubarb aromas turned to pure raspberry flavors as you sipped it, and there was a surprisingly long, juicy aftertaste that I don't often get with rosé wines. The overall impression was dry, despite all that fruitiness. The wine costs more than many rosés in the market, but it was delicious and did have the deep color and richness (albeit in rosé form) of the Montepulciano grape. I consider it a good QPR wine because is retained so much varietal character, and I think you would too so long as you weren't expecting a salmon-colored Tavel to go with your salad.

Instead, think of robust fare, like grilled sausages or try it with our dish that night: pasta amatriciana. I did some reading about pasta amatriciana, and it turns out that even though the dish is associated with Rome, it originated in Abruzzo where the grapes for this wine were grown. For those of you who haven't had it before, you make a spicy sauce with garlic and/0r onions, white wine, tomatoes, hot red peppers, and guanciale or pancetta and it's traditionally served on the hollow spaghetti strands known as bucatini. I couldn't get pancetta for love nor money on the Mendonoma coast (and guanciale? no to that, as well), so I used center cut bacon which I know isn't authentic but it was delicious. If you'd like to try the recipe, you can use Vic's recipe that he modified from Marcella Hazan. The rosé's chilly fruitiness was terrific with the red pepper, and the raspberry flavors didn't overwhelm or clash with the tomatoes but were a nice counterpoint to the smoked meat.

I discovered this rosé searching for wines from Abruzzo to sample this month. I'm hoping the regions I have yet to drink my way through have some more rosés in store for me. If you've got a favorite Italian rosé let me know, because I really would like to have some more before summer is over.