Sauvignon Blanc--With All the Bells and Whistles 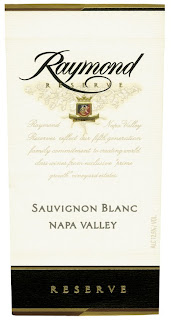 Sauvignon Blanc can be a bit of a one note samba sometimes. Don't get me wrong--even simple Sauvignon Blancs are pleasing, especially in summer when their crisp, citrusy fruit feels like it lowers your body temperature 5 degrees with every sip.

But a Sauvignon Blanc with all the bells and whistles can remind you just how terrific this variety is, and how much it's capable of delivering in terms of taste when it's in good hands.

I recently tried a 2007 Raymond Vineyards Sauvignon Blanc Reserve that was sent to me as a sample. It's from Napa, and even though I often find it difficult to find good wines under $20 from that area. With a suggested retail price of just $15, this wine definitely qualifies as an excellent QPR find.

The Raymonds have been producing wine under their own label since 1971, but their roots in the Napa Valley go deep into the past. Roy Raymond Sr. came to Napa in 1933 and married Mary Jane Beringer in 1936. Roy then took an active role in the running of Beringer Winery, which survived Prohibition by making communion wine and was busy trying to rebuild following repeal. Roy and his two sons, Roy Jr. and Walter, continued to work for Beringer until the winery was sold in 1971. Then they struck out on their own, and the family now makes several lines of wine including a series of reserve wines, a series of small lot wines, limited edition wines (including a late harvest Sauvignon Blanc that looks fantastic), and the "R Collection" of budget-friendly wines.

The 2007 Raymond Vineyards Sauvignon Blanc Reserve that I tasted was a delicious and distinctive wine. The fruit sees no oak and is fermented and aged in stainless steel. The Sauvignon Blanc juice is blended with 5% Semillon, which gives the wine beautiful body while retaining its crisp flavors and textures. Pale straw in color, the wine had succulent aromas of pear, lime, and hints of freshly mown grass as it opened up. As you sipped it, zesty flavors of citrus rounded out into juicy melon and then softened further into pear. There was a mouthwatering aftertaste that kept you coming back for more.

We had the wine with some simply grilled halibut and vegetables, and it was lovely with the buttery fish. The crispness of the wine cut through its fleshy richness without being tart or assertive. And with the vegetables that nice grassy note in the aromas became even more interesting, shading towards tarragon and thyme.

This is truly one of the more memorable and complex Sauvignon Blancs I've had for under $20. If you've been drinking a lot of tangy, grassy Sauvignon Blancs from down under, I highly recommend you remind your palate that Sauvignon Blanc has some other flavors up its sleeve. It's a new release, so don't get discouraged if it's not yet at a retail store near you--just keep your eyes peeled and buy several bottles when you see it. This one will be on my list of Thanksgiving suggestions come November, and you'll want to have enough to drink now and still have some left over come turkey time.

On my way to get some!

Yes, this is a very lovely wine. I wasnt a big fan of wine until about 2 years ago. Lately I have been researching the different types and techniques when smelling and tasting a wine for the first time, and this site called AnswersTV.com has a channel dedicated to wine. Definitely should check it out for anyone wanting to shape up on their knowledge of wine.

Hey, Doc, what do you mean my "all the bells and whistles"? This Raymond SB sounds as if it's exactly as it should be, especially for fans of purity and intensity in their wines, but WITHOUT all the bells and whistles. That term, applied to wine, seems to me to mean that the winery has pulled out all the stops and leveled all its Big Guns of barrel-fermentation, French oak, malolactic, stirring the lees and so on, thankfully not the case here but as happens with so many chardonnays from California. It sounds as if we should be happy that the Raymond SB was made "without the bells and whistles."
btw, apropros of the Pinot Noir event mentioned in your previous post, boy, am i envious. i need to try those lovely new wineries you talk about. I did have a pinot from Picket Fence in Russian River Valley two nights ago, It was, well, lovely.

Thanks for another great, and thirst provoking review. I just searched two of my local stores, and while they seem to carry Raymond Vineyard, they don't carry their Sauvignon Blanc. They have the R collection Chard, Cabernet Sauv, and Merlot and then the reserve Chard and Merlot. I may give one a try, just because you speak so well of the vineyard. Cheers!

Hi everybody. Fredric, I meant the varietal bell and whistles, not the manipulative ones, and wanted to emphasize that if you think complexity only results from that kind of manipulation, think again: this is just brilliant at being sauvignon blanc and no one had to stick an oak chip anywhere near it! Matt, I look forward to seeing what you think of the other varieties that they produce.