A Glimpse Into the Future of Wine at Taste3 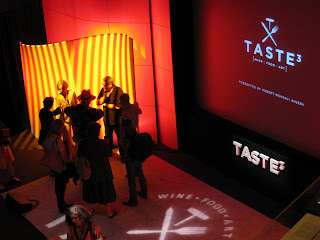 I recently applied for and received a fellowship to attend Taste3, the annual meeting at Copia sponsored by Robert Mondavi Winery that celebrates food, wine, and the arts. This year's conference was bittersweet for many in attendance, since it was the first conference to take place after the passing of Robert Mondavi just a few months ago. I listened to presentations by people who are shaping the future of wine right now, and wanted to share my reaction to their presentations while they were still fresh in my mind. I'm sure I'll be returning to many of these topics in greater depth in upcoming months. (photo of Barry Schuler and audience members after his presentation in the Copia Auditorium at Taste3)

I've categorized the wine message of Taste3 into four themes: tradition, sustainability, science, and activism. Not surprisingly, these were also the take-home points for the food and art portions of the program as well.

Tradition: There is a real interest in preserving 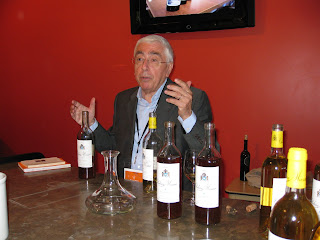 traditional ways of growing and producing food and wine, which is not surprising. It's also something I applaud wholeheartedly -- I am a historian, after all, and I hate it when the past is forgotten. I am profoundly grateful for people like Serge Hochar of Château Musar (pictured to the right) who play a key role in preserving and maintaining wine traditions that might otherwise, through neglect and ignorance, fall by the wayside and be forgotten. Drinking old vintages of Château Musar from 1970 and 1975, and listening to Mr. Hochar talking about emptying a bottle of wine while bombs fell all around his house in Lebanon just a few years ago brings home the lengths to which people will sometimes go to preserve what they value and love. Hochar views his wine as a miracle, and the direct descendant of Biblical miracles, which is why he was not at all surprised the next morning when he went out of his house and saw that it was one of the few that wasn't damaged by the fighting--the wine had miraculously saved him. 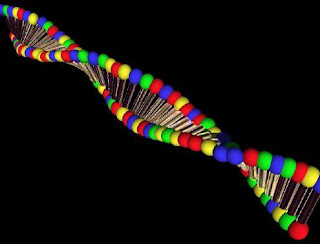 Science: What is surprising to me is that wine traditions are so often seen as antithetical to science. This viewpoint is framed by a false nostalgia for a viticultural past that never was. Winemakers, grape growers, and merchants have always been profoundly interested in "science" (or what constituted it at the time). By setting up a "winner takes all" situation where we must choose between science and tradition, I wonder if we are dooming ourselves to even more trouble.To really move forward we are going to have to sort out the vexed relationship between tradition and science--not just when it comes to wine, but food as well. I found myself with a strange case of intellectual whiplash after being both attracted and repulsed by Barry Schuler's discussion of wine and genomics. (image from PinotBlog.com) Schuler was one of the people who told us that the internet would change our lives and he was right. Now he's telling us that mapping Pinot Noir's genome is going to change our lives, too. He's got a good track record in the predictions department, but I wonder if these changes will be for the better. He likened the mapping of the genome to the monolith moment in 2001: A Space Odyssey, and suggested that mastering the blueprints of living organisms was the next step in humanoid evolution. Schuler argued that no one wanted to produce what he called "Frankenoir," but that we can and will be able to improve vinifera stock, make them more disease resistant, design varieties for higher yields, expand their climate windows, and modify them to produce better flavors and aromas. Hmm. If that's not Frankenoir, I'd like to know what would qualify. His most provocative statement came near the end, when he stated his belief that mapping grape genomes will enable us to scientifically isolate and characterize "terroir" which he feels is lying there in grape gene adaptations, just waiting to be sequenced.

Sustainability: Barry Schuler introduced the issue of climate change and grape growing in his 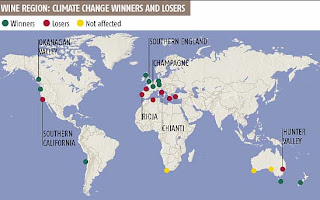 talk about the Pinot Noir genome, and that conversation continued in presentations by UC Davis professor Roger Boulton and Southern Oregon University professor Greg Jones. In a nutshell, climate change foregrounds the problem of sustainability in grape growing and wine making. Growing grapes and making wine, as Jones reminded the audience, are intimately connected to climate and are influenced by climate variability. As this map made with Jones's data shows, with temperatures continuing to rise throughout the world, grapes such as Cabernet Sauvignon, Sangiovese, and Zinfandel will continue to be grown because they like warmer temperatures. (map from newscientist.com) Riesling and Cabernet Franc (both of which have thrive in a wide variety of climate ranges) may grow in popularity as once beloved grapes fall out of cultivation (this was my conclusion, not his). But wineries are going to have to think about how to sustain their production at a time when climate and water are raising difficult issues. Boulton's presentation on sustainable wineries pointed out the huge amounts of water wineries use in tasks you and I aren't even thinking about like washing equipment. He also highlighted the enormous carbon footprint left by making glass wine bottles. When we think "sustainable" we may think using organic growing methods but we had better start factoring glass and water into the equation as well. The time for packaging alternatives, systematic water reclamation, and the use of alternative energy sources in wine production is NOW. 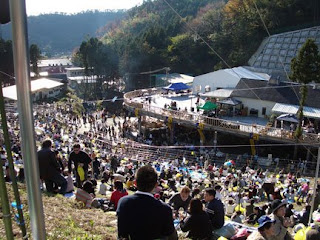 Activism: Which brings us to you, and me, and the choices we make (or refuse to make) when choosing wine to put on our tables. After seeing artist Chris Jordan's provocative and inspiring work that puts our single, individual decision to take a paper bag at the grocery store or a plastic cup on an airplane and multiplies into a more global perspective, I came to the realization that none of us has to do a giant thing to make a difference. When it comes to preserving tradition, or figuring out where we stand on science, or promoting sustainability, all we have to do is a small thing. We just have to do it consistently. Some of us will find that our one little decision will go on to change hundreds of lives. This is what Bruce Gutlove discovered when he left Napa to consult for a few days at the Coco Farm and Winery in Japan, which was started in the late 1960s to give mentally challenged youth and adults a chance to work on a collaborative project and lead productive lives at a time when their only alternative was a state-run institution with bars on the window. Gutlove departed from Napa in 1989. He's still in Japan, he's still at Coco Farm, and he's still working with his students to make wine now served at official state functions in the building pictured above. The importance of individual decisions was driven home by Benjamin Wallace, known to most people as the author of The Billionaire's Vinegar and the GQ story where he tracked down "the very best" in everything including cars, toilets, and wine. Both of those stories, in his retelling of them at Taste3, served as cautionary tales for what happens when we mindlessly assume that the most expensive thing on the shelf is actually worth it, and that we must have it to prove our own importance. Bottom line: it's usually not worth it. If you're spending $30K per night on a hotel room, perhaps you could find something more productive to do with that money such as donating it to Coco Farm and Winery?

I left Taste3 fired up and inspired to learn more about how people in the past had grappled with sustainability issues, make a difference in the growing crisis of climate change through small changes in my daily wine life, and address (rather than avoid) my fears about genetically modified grapes. And I left with a renewed commitment not to waste money needlessly on things that don't really matter when there is so much wrong with the world that really does matter. The future belongs to us and to our children. And everything we do and don't do now shapes that future--and that includes the wine we buy and drink. That was the take-home message of Taste3.
Posted by Dr. Debs at 5:30 AM

Email ThisBlogThis!Share to TwitterShare to FacebookShare to Pinterest
Labels: Taste3, wine and the environment

This looks like a great event, glad you are going!

I finally posted my eulogy to Robert Mondavi on my site today. It took a while but it needed to be right.

Hi Dr Debs
Wow, congratulations on being able to attend this event. I have seen this in the past and it looks likes an awesome even to say the least.
Great write up for this year, it sounded like a fantastic, enthrawling and thought provoking event. Thanks for sharing.
John

Thank you for such a succint connecting the dots on environmental & social issues here. Envy you deeply, been wanting a taste of Musar for around ten years now!

I'm glad that Greg Jones brought up the impact that the wine industry has in causing greenhouse gas emissions as well as the winning and losing regions.

One point of clarification from your comments above: it's not the *making* of glass bottles per se that is carbon intensive; rather, it's that they're often so heavy and that then takes a lot of carbon to transport around the world, particularly by truck. But your bottom line is certainly correct that we consumers and also producers do need to give much more serious thought to alternative, lighter packaging.

Awesome synopsis, Deb! Couldn't help but take the ball and run with it this week. I had to write more than just a comment here. See more of my response at www.pour-favor.com.

This forward looking "think-tank"-like event would perfectly fit into the new wave of producers and consumers emerging in "old-world" Europe.
Unfortunately (and luckily at the same time), the top 15 global wine players are all located outside Europe.
Still, we would appreciate such a high caliber event in Europe (why not in Switzerland?).