Friday Nights In: Soup and Sauvignon Blanc for One (or More)

Friday Nights IN is a regular feature at GWU$20 that's intended to trim a few dollars from your entertaining budget by replacing a meal out with a meal in. Some suggestions are dinners for four, six, eight, or even ten. Some are for romantic dinners for two. And some suggestions are perfect for when you need time to yourself!

This week, how about putting some soup on the stove and chilling down a zesty Sauvignon Blanc to go with it? The pairing I suggest below makes an elegant, far-from-ordinary pot of warming soup that is perfect if your plans include sitting alone in front of the TV watching The Daily Show on TiVO. Because it's a pot of soup, it will feed as many as six. If you're on your own, make the whole pot anyway. You can have it for lunch over the weekend which gives you one less thing to do. 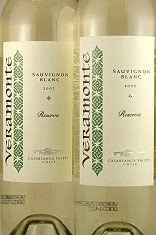 The Recipe: We loved this hearty fennel and zucchini soup with its slices of sausage and crunchy, cheesey Gouda croutons on top. If you are a vegetarian, it would be quite simple to omit the sausage and substitute vegetable stock. It has a gloriously green color (as long as you don't brown the onions--be careful!) that will remind you in the dead of winter that spring really will come back one day. The flavors are rich and nutty, and though the soup doesn't call for any cream its texture is luscious.

The Wine: For a wine that is as spring-like as the soup, try the 2008 Veramonte Reserva Sauvignon Blanc from Chile. This is a new release, and should be available near you for between $8 and $12. Like previous vintages, this is a reliably excellent QPR pick. A bit less intense than last year's vintage, the 2008 had aromas of gooseberry and pink grapefruit. The flavors pick up a richer note of crushed pineapple, which makes for a juicy wine with a mouthwatering aftertaste that will go well with the hearty but green soup described above.

Full Disclosure: I received this wine as a sample.

I never understood why most people think you can only enjoy Sauvignon blanc in the spring/summer. I'm jamming to a nice South African with some sloppy joes. Awesome combo I had never thought of before.

I don't know why, either. For me, wine isn't so much about seasons as spices and other flavorings. So SB and SJs sound good to me!