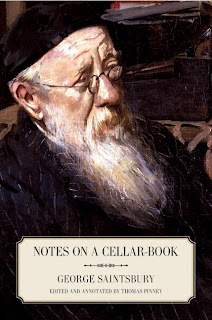 "There is no money, among that which I have spent since I began to earn my living, of the expenditure of which I am less ashamed, or which gave me better value in return, than the price of the liquids chronicled in this book. When they were good they pleased my senses, cheered my spirits, improved my moral and intellectual powers, besides enabling me to confer the same benefits on other people." George Saintsbury, Notes on a Cellar Book

Between 1884 and 1915 an English literature professor named George Saintsbury kept a series of notes on his wine, spirits, beer, and culinary adventures. First published in 1920, just as the United States was entering its experiment with alcoholic abstinence, his "cellar book" (as the notebook was called) was such a success it went through three editions in its first year of publication. Young American readers confessed to being so moved upon reading it that they immediately broke the law, drank Port, and toasted the author's health. Since that time it has earned its place many times over as a classic example of wine writing. That's why it made it to the top of the list for the 2009 Wine Book Club, and was my selection for the month of January.

Thomas Pinney thought that it was time for a modern, annotated reprint of the book--and as far as I'm concerned he was absolutely right. Now we can all have a copy of this wonderful, evocative book on the shelf, complete with notes to explain the more historical bits.

One 0f the things that makes this book a wonderful read is that Saintsbury had a wide-ranging interest in and curiosity about wine. That means he liked Burgundy as well as Claret from Bordeaux, and appreciated beer as much as vintage Port. The other thing that makes it wonderful is that it reads a bit like an episode of Masterpiece Theater--it's terribly British in its strong opinions. And so icing wine is politely but firmly designated as "barbarous." The size of the wine glass matters to the taste of the wine--or so Saintsbury believed, well before Riedel glases. And if you are going to have a special dinner, start with Sherry, move through Champagne to Claret then to Burgundy (DRC 1858 if you can get it...) and finish up with a Hermitage from the Rhone.

It came as a surprise to me that there was a concern about "big" wine even in 1923. "Once upon a time there was an author who though not a vintner wrote about wine, "Saintsbury reported, "and some of the experts found...fault with him as with one who leant too much to "bigness," "stoutness," and the like...." The offending wine was French Bordeaux--long before Parkerization--and the author was Saintsbury himself. "If you want delicacy," Saintsbury advises, "you don't go to the Rhone or anywhere in France below Gascony." What's more, Saintsbury thinks that people who refuse ever to drink a light wine, or to touch a heavy wine, are "irregular." Instead, someone truly interested in wine should drink whatever they can.

I love this book, and I love Saintsbury's writerly voice. He's curmudgeonly and opinionated but he is in no way narrow in his approach to drink. As such, he's an example to every wine drinker and writer in the 21st century.

GWU$20 drinkers may wonder if reading about fantastic bottles of wine from the 19th and early 20th centuries has any relevance to those of us looking for good, affordable, everyday wine. Saintsbury would say yes--and I would agree. For Saintsbury, what matters is that you drink as widely and well as your bank account allows and to learn the differences between wine without becoming a snob about it. Here's what he says: "Here, as else- and every-where in criticism, not only the hardest thing to attain but also the hardest thing to get recognized when attained, is the appreciation of difference [in wine] without insisting on superiority."

If this taste of George Saintsbury's Notes on a Cellar Book has wet your whistle, you can get the book from the University of California Press ($29.95) or from your favorite book retailer.

I'll post a roundup of any reviews of the book written by wine bloggers on Thursday, so send in your links if you participated in this month's club. The February title will be announced next week.
Posted by Dr. Debs at 5:30 AM

My input for this month's Wine Book Club...
http://drinkwhatyoulike.wordpress.com/2009/01/26/wine-book-club-notes-on-a-cellar-book/

Thanks, Frank! I'll be sure it's included in the wrap-up on Thursday.

Thanks again for coordinating the WBC. Here's my post on Notes from a Cellar-Book: