Baby, it's cold outside--even in LA, land of palm trees and annuals that behave like perennials. I needed some cold weather comfort food and wine, and remembered that I had a recipe tip from John at Brim to the Dregs for his girlfriend's favorite Mac and Cheese. Utter bliss--and absolutely transcendental with a rich syrah. So I preheated the oven, put water on to boil for the mac and started cubing the cheddar and Colby cheeses.

While cooking, I popped the cork on a 2003 Montes 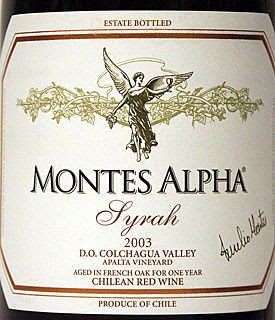 Alpha Syrah Apalta Vineyard ($15.99, Beverages and More). I bought it last spring, but this wine is still available at retailers according to WineZap--and in a few cases it actually costs less than I paid for it, too! This was an outstanding Chilean syrah from the New World made in an Old World, French style. It had a deep ruby color and powerful aromas of black pepper, currants, and a touch of fresh green bell pepper. With each sip you tasted blackfruits (blackberry, blackcurrant), more pepper, and a bit of chewy, meaty flavor that was reminiscent of a Rhone red such as Chateauneuf du Pape. These flavors persisted with lingering peppery, spicy, and clove flavors. There was a lot of complexity in this wine given the price, and I found myself wishing that I had bought more last spring.

Words cannot fully express the wonderfulness of the Mac and Cheese that accompanied this wine. After making a simple white sauce (I made mine with milk rather than 1/2 and 1/2) , you add Dijon mustard, a pinch of nutmeg, a pinch of cayenne, and half of the cubed cheese. This melts into the sauce, making it thick and flavorful. Combining cooked pasta (I used cavatappi) and the remaining chunks of cheese with the sauce produces the gooey-est, yummy-est Mac and Cheese I've ever had. Topped with some panko bread crumbs and popped in the oven, it made the perfect comfort food main dish I was looking for. We paired it with a tossed green salad and (of course) the syrah, which was a perfect counterpoint to the cheese, nutmeg, and Dijon mustard flavors in the Mac and Cheese.

Montes Alpha have released a 2004 version of this wine, and from the notes on CellarTracker it seems to be drinking as well as the 2003. If you are looking for a complex, interesting red wine to pair with your winter foods, the Montes Alpha Syrah would be an excellent QPR choice.
Posted by Dr. Debs at 8:42 AM

I have had the Montes Alpha Merlot and I would give it a Very Good or Excellent QPR. Unfortunately, my local supplier (i.e. the Government) only stocks the Merlot, the Cab Sauv and the Chardonnay. Looks like I have to pick this one up on a business trip. By the way, the Mac and Cheese sounds spectacular. Thanks for the link - Cheers!

Hi Joe and Sonadora! You are in for a cheesey treat with this recipe. And Joe, thanks for the heads up on the other Montes Alpha wines. I've never seen anything but the syrah.

Glad you liked the mac-n-cheese. I've heard good things about the Montes Alpha wines; I'll have to check out the syrah.

John, it was FANTASTIC. Thanks so much for the tip. And it makes a lot, so a good choice for when company is coming.

Montes Alpha was one of the first Chileans I ever tried. I believe that one was a Cab. Its been a staple for me and consistently good for the last 4 years.

Love it when a winery is capable of being that consistent.

Keep it in your back pocket though or it won't be under 20 bucks for long!

Hi, Joel! This is the dilemma of blogging, yes? It's a great find, and you want to share it but there are always consequences. I think it's worth it though!

In my quest for affordable and balanced syrah, I found this one to be delicious and worth every penny. I wrote some about it on my site as well and I've been drinking alot of Chilean wines lately.

Welcome, Water Into Wino. Glad as always to have folks chime in on their reactions to my choices. And thanks for the links to your website.