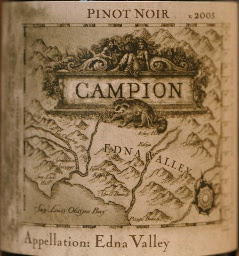 With my love of woodcuts, is it really any surprise that this label from Campion Wines would also catch my eye? Its roguish raccoon, reclining maiden surrounded by fruits and leaves, and map of the Edna Valley appellation drew me like a magnet in the wine store. The map was a clue to the character of the wine inside, which was oozing with terroir. Campion's winemaker, Larry Brooks, believes in terroir, and that grapes reflect the soil in which they are grown. I certainly could believe that after tasting this wonderful wine.

The 2003 Campion Pinot Noir Edna Valley ($15.95, Chronicle Wine Cellar) represented very good QPR. It was cherry red in color, with faint earthy aromas. Sips of the wine revealed cherries combined with earth, herbs, and a slightly mushroomy flavor. As time passed, more mushroom and earth flavors convinced me that this was a pinot noir with terroir, and less a pinot that emphasized fruit. This wine could have been more intense up front, but it was very complex and interesting as you held the flavors in your mouth after each sip, and remembered the slightly silky texture that kept it all interesting. We had it over two days, preserving it with one of those little cans of inert gas, and it continued to develop and the fruit and earthy flavors became more integrated. For this reason, I think this pinot noir is still at the beginning of its life and could last for a few years in a cool, dark place.

As if proving the value of terroir, this 2003 Edna Valley contrasted in interesting ways with the 2004 Campion Central Coast that I had at Colorado Wine Company last week. It was a year younger, made with fruit from Edna Valley and other areas within that appellation, and had the addition of pinot gris. Still, it was remarkable how much more fruity it was, with not nearly the complexity and earthiness than the wine made exclusively with Edna Valley fruit.

Campion is a name to watch, and was named one of the up-and-coming California wineries by Dan Berger in Tom Stevenson's Wine Report 2007. I'd love to tell you more about how the wine was made, but the Campion site hasn't been updated recently, so there was no more detailed information available on this wine. I did find a few bottles on line from merchants on both coasts through Wine-Searcher at a higher price, but be careful you're getting the Edna Valley since Campion releases several pinots from different appellations.

The ideal meal to go with any Pinot Noir with fulsome terroir--the Campion or someone else's--is Jamie Oliver's simple mushroom pasta dish. Made with silky pappardelle noodles, combined with a simple sautee of mixed mushrooms, garlic, dried chilis, parsley, and butter, it is the perfect match with any earthy pinot that you might have in your closet.
Posted by Dr. Debs at 8:38 AM

Campion is a very good source of sub-$20 pinot (all too rare these days, of course). For those who have more cash than they know what to do with, they also make a terrific pinot from the Sarmento vineyard for about $50. I tasted the 2003 vintage a while ago and it was an amazing expression of terroir and balance.

Sounds like a good one--very true that good under $20 pinots are hard to find. I've had a few good ones from New Zealand in that range recently, but not as earthy as a great pinot. I do have a 2003 Foris Pinot from Oregon waiting to try, also under $20. The recipe you suggest might be just the thing for it!

Hi, Seb and David. I'm looking forward to someday trying one of the higher end Campion pinots. I've heard good things about the Carneros, too. I've never had a Foris, David, but the pasta recipe is excellent. Don't leave out the crushed chili--it really adds a note of complexity to the dish that helps draw out the wine.