This month's Wine Blogging Wednesday, the online tasting event dreamed up by Lenndevours, is hosted by Joanne and Jack of Fork & Bottle, a wonderful site dedicated to highlighting artisanal food and wine production. The theme they set for this month is biodynamics, and it is a method of farming that has fascinated me since this past summer when I attended a Slow Food dinner at Oz Farm just outside Point Arena, CA. There I heard direct from the organic farmers how they felt that biodynamics made a difference in the quality of food they produced. At dinner, we sipped our way through a lovely 2002 Porter-Bass Zinfandel (also made biodynamically) which seemed to confirm everything that they said about the value of this farming practice. Since that time I've also had a 2004 Quivira Mourvedre Rose that was simply outstanding, and a 2004 Sollner Gruner Veltliner Danubio which was equally good.

There are lots of resources online to help you understand what biodynamic farming is, and I'm not going to repeat all of that information here. Suffice it to say, if you were plunked down in Europe anytime before 1800 you would be witnessing biodynamic farming. For centuries, wine-makers were using just these methods--right down to the cycle of the moon and stirring compost in one direction. Who knows if science will be able to detect any difference among wines made biodynamically, and those made other methods?

So what do my very unscientific tastebuds tell me about biodynamic wines? I turned to the 2004 Bonny Doon 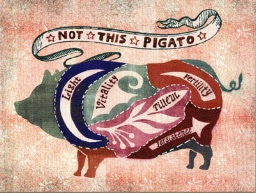 Pigato Ca' del Solo ($20, straight from the Bonny Doon website) to find out. This wine was initially released to the DEWN wine club, but like many DEWN wines it was later released to the general public via internet.

In early 2004, Randall Grahm decided to turn his Ca' del Solo vineyard over to organic and biodynamic farming methods. Formerly the vineyard associated with the Big House Wines, Grahm sold that label in summer 2006 to give himself more time to devote to smaller production, biodynamically produced wines. As best as I can figure out, this wine was made from the first grapes grown biodynamically on the property, and they are just about to wind up the three- year process needed to earn Demeter certification.

The 2004 Bonny Doon Pigato Ca' del Solo was a very good QPR wine with intense mineral flavors. After unscrewing the closure and pouring myself a glass of wine that was such pale straw it was almost translucent, I was able to smell spring flowers and herbs. On the palate, light citrus flavors were accompanied by delicious herbal touches and a deep, profound minerality. As I drank, I was sometimes convinced that I tasted a light saline tang. This was my first pigato, the native grape of Liguria given a porcine name because of its spotted skin. As a result, I can't judge it against other pigatos, but here's what I know for sure: this wine tasted of place, of salt and minerals, and grass. It had the strong mark of somewhereness and terroir that Grahm wants to achieve from his biodynamic switch. It was refreshingly mineral-forward (as opposed to fruit-forward). I just loved it, and would definitely buy more.

With the wine we had the Barefoot Contessa's tomato-based fish stew and it was an amazing pairing. I subbed a pound of scallops for the mussels, and a pound of cod for the bass and halibut, and it was still delicious, with its rich stock made of tomatoes, fish stock (mine from a lobster stock base), and lots of white wine kissed with saffron. The Bonny Doon pigato is made to go with fish--grilled, baked, sauteed, in risotto, or prepared scampi style--with its mineral and herbal flavors.

Now that I've tasted the first fruits from Bonny Doon's switch to biodynamics, I am looking forward to comparing it with later vintages as they are released. But it seems that biodynamic viticulture is going to produce some great wines over at Ca' del Solo.
Posted by Dr. Debs at 8:19 AM

I also loved you summation about 1800s farming...as you'll see in the round-up.

You're entirely welcome--it was a great theme and this is a round-up I'm looking to with real eagerness.

Glad to see you selected a Bonny Doon wine. I've been a Randall Grahm fan ever since I heard him give a talk back in the 80s. I wasn't aware of his venture into biodynamics. Very interesting posting.

Nice write up, I just tried the Cigare Volant again and enjoyed it.

-John (from the REAL wineunder20.com)

I missed this WBW--getting ready to host the first "Leftover Tuesday"--but will have to check out the round-up. Great piece. I still haven't tried any Bonny Doon, I hear a lot about it but don't seem to come across it much in the Boston area.

Welcome John from wineunder20.com. I've never had the Cigare Volant--usually out of my price range! David, it's not clear yet what wines BD will be releasing nationally, and which will only be available via the web. They often run specials on the web, so if you can get direct shipments in Boston, you might want to check out that option. And John from Brim to the Dregs: we are both going to be sad to see Big House go, but it does look like there will be some new options for old Bonny Dooners like you and me.

Hi Nice Blog .If your time is less valuable, then it is probably less worthwhile to labor time management .