Exploring the Wines of Abruzzo

Between the Apennine Mountains and the Adriatic 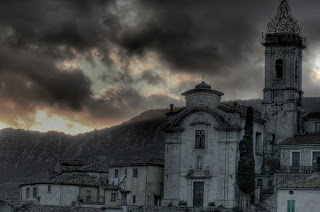 coastline, on the calf of Italy's boot, lies the region known as the Abruzzo. Like many regions in Italy, Abruzzo is a study in contrasts between oceanside resorts and high mountain passes, abandoned medieval villages and modern hydroelectric plants. The local wildlife includes Swiss ski bunnies and much more formidable bears, wolves, and other vanishing species that find refuge in the Parco Nazionale d'Abruzzo. (photo of the village of Colleedimezzo by kruder396) 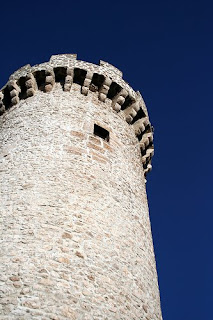 Abruzzo is a place where the mass- production of wine is giving way to a more careful, smaller approach to grape farming that is more reflective of the region's agricultural past, and part of a general swing in the south of Italy towards wines that can be more competitive on the international market. One of the Abruzzo's problems is that their great red grape, Montepulciano, shares a name with a place in Italy that makes pretty good wine, too. But consumer awareness is gradually catching up with the region. After decades of being associated mostly with Trebbiano d'Abruzzo (you may know is at Ugni Blanc), it is now possible to find rich roses made from Montepulciano d'Abruzzo that are labeled "Cerasuolo"and full-bodied reds made from the same grape that are suitable for some time in the cellar. (picture of the Torre Medicea near S. Stefano di Sessanio by kruder396)

This month I'll be exploring the red, white, and rose wines of 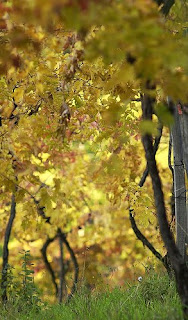 Abruzzo to learn more about the region and how it is changing. I'm looking forward to tasting a Montepulciano d'Abruzzo, of course, made by a well-known maker that retails for slightly more than $20--but everybody tells me it's well worth the splurge. I've also purchased a "Cerasuolo," and a white wine that isn't made from Trebbiano grapes, but from another grape with an identity crisis: Pecorino. (picture "Vigna" by Antonio Dell'Elce) 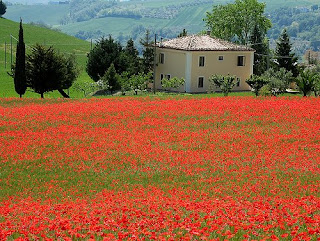 summer. The Abruzzo is known for its liberal use of chili peppers, and for its grilled pork and lamb. It's also home to DeCecco pasta, so there will be at least one pasta dish made with the native noodles. (Red Camp, by Giuseppe Andrea)

I'm eager to hear about your experiences with the wines of Abruzzo. Have you only had a cheap Montepulciano d'Abruzzo with your pizza on a Friday night? What about your luck with Trebbiano? And for those of you who know the wines better than I, which producers do you look out for in the stores?
Posted by Dr. Debs at 10:33 AM

Email ThisBlogThis!Share to TwitterShare to FacebookShare to Pinterest
Labels: Abruzzo

I have mainly had inexpensive Montepulciano d'Abruzzo, under $20. But I have had one high end wine, the My favorite wine of the tasting was next, the 2003 Cataldi Madonna Montepulciano d'Abruzzo Malandrino ($46). A very dark red wine with a vibrant nose of lush blackberry and spice. A full bodied and rich wine with lush dark berry flavors. A complex wine where every taste seems to bring different flavors. The lingering finish is seductive and silky.

Two of my very favourite wines are from Abruzzo and represent good value and one being under $20.

The Valentini Trebbiano d'Abruzzo is a honeyed pleasure bringing white.

Neither of these are dessert wines despite the way I've just described them, they are just delicious, seek em out.

I checked out a number of Montepulciano d'Abruzzo a while ago, all under $20 and my favorite was the 2005 La Valentina, which sold for a very reasonable $13.
I look forward to reading about your discoveries.

Thanks for the suggestions. I haven't been able to find any of these wines in my neck of the woods--though I would like to try all of them. One thing I'm learning about Italian wines is that the distribution is highly localized. In particular, what is available on the east coast bears almost no resemblance to what I see out here.

I recently began exploring everything Montepulciano after sampling a 2005 Kurni and soon learned the difference between regions and grapes. I've come across two worth trying: Citra (which also produces a nice crisp Trebbiano) for around $7, and Umani for around $9. 2005 or earlier seem to be best for immediate enjoyment, but 2006 wasn't so bad. I have a couple more in the cellar to try but they cost considerably more, particularly the Kurni, so I'm waiting to exhaust my cheaper supply. Enjoy...

Thanks, Lt Goto. I'm particularly interested in these suggestions because I take it from your profile that you are buying wine in LA. Where did you find these? My vino visit to Montepulciano was one of the high points in my Italian drinking tour so far, so I can certainly see why you would become a fan of this region. If you get a chance, try a Pecorino. Good stuff.

I'm fortunate to be surrounded by a lot of decent wine stores in LA. I buy the expensive stuff (Kurni) from K&L Wines and the cheaper stuff (Citra, Umani) from Bevmo. There are quite a few I didn't like, but it's probably just my personal taste: Vallevo, Vestini, to name a couple. I had a Farnese recently that wasn't bad. I'm envious of your wine tour. I recently honeymooned in Rome, Naples, etc. but regretfully didn't think to visit a winery.