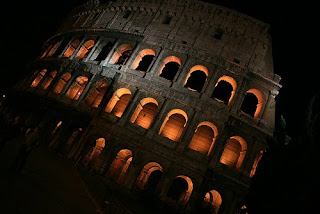 Of all the places I've been in Italy, the one that I love the most is the countryside of Lazio and its ancient city of Rome. Typically, I divide people into two categories when it comes to Italy: "people who prefer Florence" and "people who prefer Rome." I went to Florence expecting to love it--and discovered that it didn't send me nearly as much as I thought it would. I went to Rome expecting to be less than enchanted. One near death experience with a Vespa near the Vittorio Emmanuele monument, one prowl through the catacomb of Priscilla on a hot July afternoon, and a granita de caffe from Tazza d'Oro by the Pantheon and that was it--I was in love. I lived in Rome one summer many years ago, past the Colosseum down by the Pyramid stop on the metro. That summer I walked everywhere, drank in the hot dry air scented with rosemary and pine, and thanked my lucky stars that the Romans were so patient with my appalling Italian. To me, Lazio is "al bacio"--which is Italian for perfect. (photo by apesara)

This month I'm headed back to Lazio through its 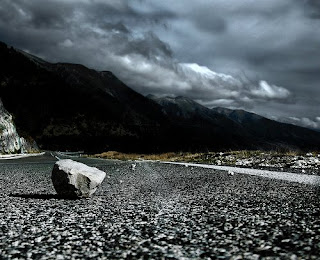 wines, and hope to recall some of the memories of the people and places I loved. Lazio is the region on the knee of Italy's boot, and it's been a center of political and religious life for millennia. It used to be said that all roads led here, because the pull of the city of Rome was so strong. Rome is such an ancient city that no one even knows how it was founded. Some legends say it was settled by refugees from the Trojan War, others tell of Romulus and Remus. No matter what legend you pick, today you'll find that it's a land of generous people, fierce football rivalries, steep mountains, undulating rivers, and impossibly beautiful ruins. (photo taken on a Lazio road of "A rolling stone" by rattodisabina) 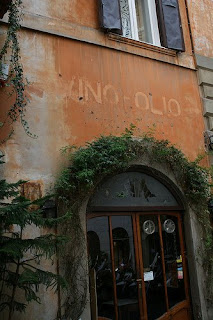 Just as the origins of Rome and the early history of Lazio are shrouded in mystery, so too is the early history of wine in this region. Grapes have been grown here almost as long as people have lived here, and today the region's wine is dominated by crisp whites like the famous Est! Est!! Est!!! from Montefiascone. Est! Est!! Est!!! got its name from one of the first published wine critics, Martinus, who was the servant of a 12th century German bishop named Johann de Fugger. While traveling to Rome in advance of his master, Martinus scrawled "est!" (there is!) in chalk on the gates of any cantina serving good wine, and "est! est!!" when the wine was very good. When he got to Montefiascone the wine so impressed him that he had to say it three times. (photo "Vino e Olio" by dags1974)

In Lazio, as in all of Italy, wine is something that goes on the table with food. Rome has long been associated with gourmets, since its population has been dominated historically by politicians, priests, and the elite female entertainment industry of the professional courtesans. One of my favorite Roman sayings is "Chi se vo’ impara’ a magna’, da li preti bisogna che va," which translates into "If you want to learn to eat, you've got to go to the priests." Satisfying and simple food like pasta and gnocchi, artichokes, pollo alla Romana, Saltimbocca, and soups such as pasta e ceci make the wine and food of Lazio a feast for the soul as well as the belly.

I'll have a white wine review and a red wine review from this region in the upcoming weeks, and I'm still on the lookout for a sparkler to try, as well. Starting next month we'll start heading north into areas that produce wines just perfect for cooler nights and shorter days.

Email ThisBlogThis!Share to TwitterShare to FacebookShare to Pinterest
Labels: Lazio

Lovely intro. I feel the same way regarding Florence (eh) and Rome (wow!). Have you ever had the Coenobium (white) made by Paolo Bea's son in Lazio? (If you've reviewed it, sorry.) A lot better than the usual bland whites of the area. He makes it for a convent Cistercianettes.

...OF Cistercianettes. Sorry for the lapse.

Grazie, Domenico. Most people are Florentines at heart, so it's good to meet another Roman! I haven't had the Coenobium, but I will look out for it. Anyone making wine for Cistercians is ok by me.