TAPAS Is for Tempranillo Lovers 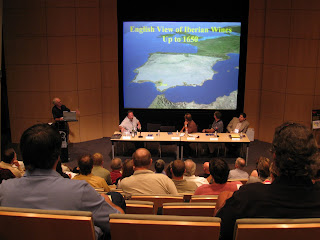 On Friday I attended the first ever TAPAS event at Copia, the American Center for Food, Wine, and the Arts in Napa. TAPAS stands for the Tempranillo Advocates, Producers, and Amigos Society, and it has more than sixty wineries and vineyards in its membership. It was a great opportunity for me to learn more about Iberian varieties and how US wine makers and grape growers are using them to craft distinctive wines that are full of personality. (Picture of Earl Jones of Abacela Vineyards, the president of TAPAS, and other panelists)

There is a long history that helps to explain why Spanish varieties are relatively new players on the US wine scene. Most of it has to do with the government--as usual. When the Spanish came to the New World way back when, they wanted to protect the Spanish tax base and wine exports and so they prohibited the really good grapes from traveling overseas. What did this lead to? Colonists in pursuit of good wine grapes went to the French, Italians, and Germans which gave grapes like Chardonnay a leg up and put Spanish grapes way behind. Penelope Gadd-Coster of Coral Mustang Wines asked the million dollar question: "Where would Tempranillo be [now in the US] if Jefferson had not been a Francophile?"

The tasting that occurred in the afternoon was a real eye-opener for me and for most of the people there because how many times have you ever had a chance to taste 40-45 US Tempranillos side by side? Tempranillo is often likened to Cabernet Sauvignon for its versatility and quality, and that was true in the wines I tasted. I was struck by the wide range of flavors that the grape was capable of producing here in the US. There was everything from luscious, fruit-forward wines to bottles that would have been hard to identify as New World. Coral Mustang's 2004 Tempranillo from the Vista Creek Vineyards in Paso Robles ($22) had smoke, leather and a beautiful balance between these notes and the blackberry and black raspberry fruit. Tempranillo grapes have a smoky flavor, and this wine was made in neutral oak barrels, so any smoke was from the fruit, not the wood. The 2006 Bokisch Tempranillo (not yet released, around $22), had the same beef tea flavor that I last tasted in a 1991 Bodegas Montecillo Gran Reserva Especial from the Rioja, along with roasted herbs, earth, and a smoky aftertaste. The 2005 Six Sigma Tempranillo ($42), on the other hand, used French oak barrels when making its wine which resulted in vanilla aromas and juicy fruit flavors of blackberry and fig along with some coffee. I particularly liked Valley View Winery's 2005 "Anna Maria" Tempranillo from the Applegate Vineyard in Oregon ($24). It was very traditional in its flavors of cherry, strawberry, and cedar, and its lightness and elegance was striking. And Tempranillo is made for aging, as was clear in the 2005 Scribner Bend Black Hat Tempranillo ($14.95) with is cherry, strawberry, and smoke flavors and a core of bright acidity that will soften with time.

Tempranillo is also being used in blends, which is true in Spain as well. One blockbuster blend was the 2006 Twisted Oak The Spaniard, which has not yet been released but should please everybody with its ooh-la-la flavors and aromas of chocolate, cherries, smoke, and leather. The 2005 Core C3 Crazy Eights ($39) was made from a blend of 85% Tempranillo and 15% Cabernet Sauvignon. It had amazingly rich blackberry fruit flavors that exploded in your mouth, along with rich cedar and chocolate notes.

But the day wasn't all about Tempranillo. TAPAS celebrates all Iberian grape varieties, so there were people pouring wines made from other grapes like Touriga Nacional and Graciano, too. I tasted a 2007 Twisted Oak Graciano barrel sample that was one of the most interesting wines of the day, with its cranberry aromas, smoky aftertaste, and cherry and blackberry flavors. The NV St. Amant Tawny Port ($35) is made from 100% Bastarda and had heady aromas of raisins, toffee, and toasted nuts in a wine with a rich tawny color and a silky texture. Both Barreto and St. Amant produced excellent Tourigas, too. The 2005 Barreto Cellars Touriga (around $25, not yet released) was very drinkable with floral and spice aromas, spicy fruit red and black fruit flavors, and a soft finish. The 2006 St. Amant Touriga ($18) had aromas of violets and spice with cherry flavors, and a hint of beeswax in the aftertaste.

As for white wines, I think they are still a work in process. There is enormous potential in the Albarino grape, as well as in Verdelho. Albarino has the body to bump Chardonnay of its perch, and Verdelho should be on every table that is currently adorned with a simple Sauvignon Blanc, but right now the wines are a bit unfocused and I think the emphasis is on making quaffable wines. Nothing wrong with that of course, but I think we will see more wine makers trying to craft something more distinctive with these varieties. The 2007 Bokisch Mokelumne River Albarino ($16) takes a big step in that direction, with sensational aromas and flavors of orange blossom and buttered apples, balanced acidity, and a crisp yet juicy finish. This was an extraordinary and memorable white wine, and shows just how great Albarino can be.

Based on this event, I think we can all look forward to some golden years of drinking wine made with Iberian grape varieties right here in the US. It will be exciting to see what the grapes do as more vines are planted, and what wine makers do with the juice once more of it is available. If you haven't yet discovered these wines, you are in for a treat. If you have, let us know what your favorites are in the comments.
Posted by Dr. Debs at 5:30 AM

Thanks for your ace on-the-spot reporting, Debs. Most curious about TO's Graciano & I'll have to look up El Jefe & Fermento's geek sheet. Cecchin in Argentina has the only plantings of the variety & I'd like to talk them into letting me barrel ferment some, with stems...but this is a lonnnng topic for later-- cheers!

Oh I just love Penny and I'm dying to taste her Tempranillo.

I'm really great you posted all these wines. I adore Tempranillo and don't spend enough time drinking it. You've inspired me to get back out there and start drinking them again.

I went to the Saturday tasting for us "average folks" and was also impressed by Twisted Oak's Spainard, but I think my favorite from the Murphy's winery (with their funny rubber chickens) was the Torcido Grenache. And I preferred Bokisch's other Albarino, the Clement Hills, as I thought it had better acidity and was more reminiscent of a true Rias Biaxas Ablarino. There were some nice rosés there as well -- check my blog in a few days!

Great tasting with you at TAPAS. I
thought I'd let you know that Bokisch is on its way to WineQ! Core is also interested, so hopefully their wines will be available soon, too.

Hey that was an interesting read. You must have had a great experience about TAPAS. Thanks a lot for sharing your experience.