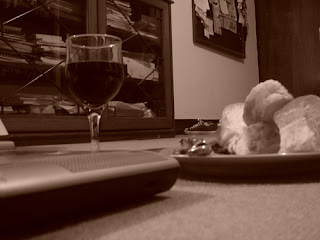 Last week, Rodney Strong Vineyards made some wine history by being the first winery to release sample bottles of an allocated, limited- production wine--their 2005 Rockaway Cabernet Sauvignon--to a group of wine bloggers at the same time that the wines were sent to the Wine Spectator and other print journalists. (image by said&done)

Coordinated by Jeff Lefevere of Good Grape, the release of these wines into the hands of bloggers marked what I think will be seen in future years as a turning point in how wines are reviewed in this country.

Those of you who haven't been following this story, and even those of you have, might be interested in hearing a little bit more about how this all came about. Earlier this summer, Jeff Lefevere contacted a group of bloggers including Tim Elliott of Winecast, Renee Wilmeth from Feed Me/Drink Me, Sonadora from Wannabe Wino, Joe Roberts the 1 Wine Dude, Kori from Wine Peeps, and master sommelier candidate Arthur Black who guest blogs on Good Grape. He wanted to know if we would be willing to participate in an experiment with Rodney Strong in which we would receive a bottle of soon-to-be-released wine in exchange for an assurance that we would blog about some aspect of Rodney Strong's Rockaway Vineyard project during the week of August 18.

We were free to blog about anything. We were of course free to report if we didn't like the wine. The only requirement was that we blogged something during that week. If you follow the links to the participating bloggers above, you will discover that our notes are consistently positive and quite similar in terms of what we tasted, but I hasten to add that we all tasted the wines independently and wrote our reviews independently.

Why did Jeff want us all to blog about this topic in the same week? It was not because it was "payment" for the review. Instead, Jeff wanted to be able to gauge the impact of a group of bloggers working simultaneously on the same wine. One of the questions that bloggers wonder about is do our individual voices make a difference, and would we be more powerful if we were working in a group?

I think it will be a while before we know what the impact of this experiment might be. I do think that this will not be the last time that winemakers will release their wines to bloggers and print journalists simultaneously--even though this was, to my knowledge, the first time such an effort has been made with a higher-end wine.

After participating in the Rockaway experiment, I remain convinced that the #1 advantage that bloggers have over print media is simply this: time is on our side. It will be months before this wine is reviewed in print. But now, just prior to the wine's release, there are half a dozen reviews of this wine on the internet for anyone who is considering joining the Rockaway mailing list.

What do you think about wine bloggers as individual voices, as opposed to wine bloggers joining together in such a project? If you followed the Rockaway project through the blogosphere, did having multiple perspectives on the same wine help you to determine whether you might be interested in it? And most importantly, is this something you would like to see more of with a wider range of wines--not just the higher end bottles? I'd be interested in hearing your thoughts and reactions, and I'm sure the other participants would, too.
Posted by Dr. Debs at 11:12 AM

With all of these sting ops. going on in the wine world... maybe they actually gave us Yellowtail mixed with Petite Verdot and put it into a snazzy bottle...

and Rockaway is not an actual winery...!

I guess I'm confused what is the news item here? Twisted Oak, Stormhoek, and more and more wineries here in Spain and Portugal do this. I never thought to mention it as a news item though. I want to be treated like a wine journalist, so I assume I'll get samples. Not sure what the big deal about this one is.

I think I agree with Ryan on this one. We aren't "just bloggers" anymore. I think that most in the industry (or at least many) see us as journalists. That is how I want to position myself certainly.

Wine journalists get samples all the time. And I do too. I used to get them because of my print columns and affiliation with Appellation America, but now almost all of them are sent to Lenn Thompson of LENNDEVOURS.

What Jeff and Rodney Strong is a very cool thing, obviously, but I think it's just a natural progression. Don't you?

Dear Ryan and Lenn, as I said this was the first time TO MY KNOWLEDGE that a winery released samples of an ALLOCATED wine to a group of bloggers at the same time they released to the magazines. If you know of another example, please let me know. I was not aware that either Twisted Oak or Stormhoek distributed allocated wines at the same time as they did to print journalists--I was not on the list if they did.

I appreciate your perspective that you see this as a non event. Your comments here sound like El Jefe's on my blog, even citing the same examples.

You were the same person who said that my Wine Blogging Review Coalition was a pipe dream.

All I can say is I respect your opinion, even though I may not always agree

This RS effort is the natural next step in a trail blazed by Twisted Oak and others. And the influence of bloggers will only get stronger, while the power of traditional wine media will be diluted over time.

I'm curious why only a limited number of bloggers were invited to participate. Seems contrary to the spirit of social media...

David, I would agree that this is an evolution. But every step of that evolution is historic, and every step warrants some reflection. The Constitution was the natural evolution from the Declaration of Independence--but I don't see anyone saying that the Constitution lacks historical significance.

Jeff L.--months ago--floated the idea of a coalition of bloggers reviewing the same wine. Some said it couldn't be done. Jeff went out and did it. He asked a few bloggers to try this out as a pilot program. We're the ones who agreed. Like most first-time efforts, it was a trial balloon with a few participants. I'm sure this will not be the last time that such a thing is attempted, and that future efforts may well involve more people.

I don't think this is contrary to the spirit of social media at all. Indeed, I can't even see how you would think that. I don't expect every blogger to buy me a bottle of every wine they review, or every company who sends Ryan or Lenn a sample to send me one. I've never found that objectionable.

Gee, all this is stirring but here am I thinking, "Shit! No one ever sends me wine to review!" I wonder why...