A Honey of a Second Label 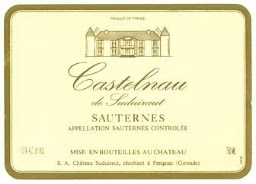 All over the world, fancy winemakers blessed with more fruit than their limited production wines can use, or fruit that is almost but not quite up to their standards, are crafting wines under second labels. Here in the US, these second labels are often guarded as big secrets. I've had more than one person tell me who the real maker of a second label was as long as I promised not to reveal it. More open "secret second labels" include the great Napa Cab maker Larkmead's second label wine, Meadowlark. Once Gary V has outed you, it's pretty hard to achieve plausible deniability.

In an odd twist, France is quite open about its second labels. Lots of chi-chi makers have second labels, and they're quite proud of them. So it was with real anticipation that I opened a 2003 Sauternes bottled under the second label of the famed Bordeaux producer Chateau Suduiraut. Called Castelnau de Suduiraut, this is (like many second labels) an unbelievably good wine for an unbelievably good price. I received this bottle as a sample from the Bordeaux Wine Bureau, who puts out a list of the 100 top Bordeaux values every year.

To give you some pertinent details, the Chateau Suduiraut Sauternes is a premier cru wine from Bordeaux. The 2003 bottle scored 93 points consistently across the board, and had a suggested retail of $55 for 750ml (though that size bottle is now going for $50-$100). Right now the average price for a 375ml bottle of the stuff is $35.

So how was it? In short, it was excellent QPR. The 2003 Castelnau de Suduiraut Sauternes was a lot of bang for the buck, and though not as transcendent and ethereal as some of the most expensive Sauternes, it was full of the spicy, sweet, and honeyed flavors that make this most people's favorite dessert wine. If you've had dessert wines in the past and found them unidimensional and sickeningly sweet, that's not what you experience in good Sauternes. Instead, the fruit I always think of is pineapple. There is a sweet yet acidic quality to a good Sauternes and this wine had it. It was honey-colored, and slightly less thick than some Sauternes that I've tasted. There were prominent aromas of pineapple, coconut, and honey and these aromas developed perfectly into the flavors. As the wine opened up a bit during the course of the evening, the flavors continued to deepen and gain some weight, which suggested to me that this wine--though delicious now--will be even better in a few years. Because it is not terribly sweet for a dessert wine I would think of pairing it with cheese and fruit for dessert, or just sipping it on its own.

If you are looking for some inexpensive but excellent Sauternes to try, or to buy in multiple bottles so you can stash them away and open one every now and again, this is a no-brainer choice. 2003 was an excellent vintage, and this is an excellent QPR way to get a taste of it.
Posted by Dr. Debs at 5:30 AM

Your points about second labels are great ones. I often prefer the second labels, esp. of Italian wines, because these are the ones that are really meant for the domestic market and the winemakers don't futz around with them as much -- eg, over-applying the oak. The second label wines are more typical and refreshing, usually, and of course are FAR better value.

This is such a great topic -- I'd be surprised if more people didn't run with it.

BTW in a little pre-commercial for myself, most of the wines I'll be bringing in soon (Sept) will average $15 wholesale...maybe available for 20 or less retail. We'll see if we can get them into WL!

yeah i agree with you

I often prefer the second labels, as well, because they're easier to have with food--not so overwhelming, yet pleasant and tasty.