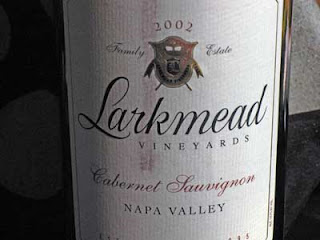 The theme for today's 4th anniversary/ 48th Wine Blogging Wednesday is "Roots." Our founder and host, Lenn Thompson of Lenndevours, asked us to dig down into our wine memories and taste a wine that helped to make us the wine drinker we are today.

For the occasion I opened my last cherished bottle of 2002 Larkmead Vineyards Cabernet Sauvignon from the Napa Valley. ($38.69, Costco way back in March of 2006 before this blog was a gleam in my eye; expect to pay $50-$60 in today's market)

The reason why I chose this wine is not because it's what I drank in college, nor was it my first fine wine.

The reason why I chose this wine is because I first came to understand that wine had roots--that it came from grapes that were grown somewhere and then made into wine by somebody--at Polly Solari's sprawling ranch house on Larkmead Lane in the summer of 1987 when I was a mere 22. It was here, with Polly and Larry Solari, that Larkmead Vineyards began. I was visiting the house with a close friend that I met in Oxford who, it turned out, had a grandmother who lived in the wine country. Mrs. Solari was warm, hospitable, and pulled together fabulous meals out of some amazing produce grown right there. To this day I can remember the taste of the warm white peaches that we ate with vanilla ice cream in her backyard overlooking the grape vines. My friend Geoff and I walked out into the vineyards--my first touch of the vine!--and there were discussions of wind towers, pruning, grape varieties, and more. It would take me another ten years to return to Napa and take up wine with a passion, but I think that the roots of that passion go back to those warm summer days and the extended Solari family's generosity and friendliness.

Today, the Solari wine making tradition (which began with Mrs. Solari's husband who came to the US from Tuscany in 1920) is in the hands of Kate Solari Baker and her husband Cam Baker, wine maker Andy Smith, and winery manager Colin MacPhail. Larry Solari was president of United Vintners (think: Inglenook and Beaulieu), chairman of the Wine Institute, and bought the Larkmead properties in 1948. Larry Solari believed in the potential that the property had to produce exceptional wine, and the bottle I tasted certainly lived up to that promise.

The 2002 Larkmead Cabernet Sauvignon is a stunning example of a Napa red wine. It was rich, dark purple in color and had pure aromas of blackberry, plum, cassis, and some herbal notes. The flavors came forward in lovely layers of black currant, blackberry, graphite, and eucalyptus. The aftertaste lingered, with smoke and herbs catching in the back of your throat. At a time when critics are pronouncing any Napa Cab a bargain if it is $75, this one delivers excellent QPR for its complexity and its elegance, as well as its price point.

This is not a monstrous Cab that you will have a hard time matching with food, but to really make the wine shine I'd serve it with some grilled London broil, some Fingerling potatoes sliced in half the long way, tossed with olive oil, rosemary, and salt, and roasted in the oven for about 35 minutes at 400 degrees. Toss a salad, slice some farmstand tomatoes, and cut yourself some crusty bread and you have a meal that Mrs. Solari would have approved which will also complement the wine beautifully.

If you ever get the chance to try some Larkmead wine, I urge you to do so. Not only do they make red wines, they also make Tocai Friulano from some of the oldest plantings in Napa (1893!), and have a second label called Meadowlark. The Cabernet is currently by allocation only, through the Firebelle List (named after Lillie Hitchcock Coit, who was an early owner of the Larkmead properties and also known as "Firebelle Lil").

Thanks to Lenn for a great theme, and this is one of those WBWs where I'm really looking forward to reading the other posts.
Posted by Dr. Debs at 5:30 AM

This was a great memory!

I was transported to the vines in your story - and a bit sad not to have a bowl of peaches on hand... Cheers!

A terrific story. I've really enjoyed reading all the stories of great memories of wine.

A terrific blog entry. Larkmead was the first "expensive" Cab I bought when I graduated from the plastic cup school of wine drinking. It has never disappointed me.