Are Wine Critics Born or Made? 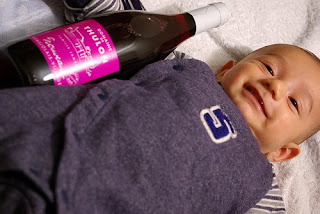 I've always blamed it on UC Davis. I took their "Introduction to the Sensory Evaluation of Wine" course and I came out of it smelling green pepper in Cabernet Sauvignon and talking endlessly about currants and gooseberries.

My dad puts me to shame when he describes a wine. He smells all kinds of things--rhubarb, for instance--that elude me.

And I think my niece is going to put me to shame, too. She's thirteen. We were visiting friends in Paris and they--in true French fashion--offered her a taste of the delicious Chenin Blanc we were having with dinner. She refused, but did allow as how she'd like to smell it. I handed her my glass, expecting her to twist up her face and say "blech." Instead, she lowered her nose into the glass and made an appreciative sound.

I asked her what it smelled like, and braced myself for the response "wine." Her grandmother frequently has this response, and the child is, after all, thirteen and eats mostly white meat chicken and rice. What does she know of gooseberries?

"Citrus and meadowlands," was her reply.

I almost fell off the sofa. She pretty much nailed the aromas in the wine--and it's not because we text message each other about wine. Her parents drink wine but I think both would admit that they enjoy sipping it more than talking about it. And I see my niece once every few years--so I haven't contaminated her with winespeak.

I've been thinking about her response ever since and wondering if wine appreciation has a genetic component. That's not to say that education means nothing--I think it means a lot. But I do wonder now if both an interest in wine and the ability to taste and smell a wide range of flavors and aromas in wine also depends on your DNA.

I'm sure there's a scientific study somewhere that talks about this, but I want to know what you think. How do your sensory abilities with respect to wine stack up to your parents and grandparents? What about your kids? And if you have kids who smell wine, I wonder if they are less inhibited and more intuitive in their descriptions. As we age, do our minds tell us "there's no raspberry in that," whereas once our noses were screaming "berries, yum, berries"?
Posted by Dr. Debs at 5:30 AM

"Citrus and meadowlands" ... that's great! In addition, visiting Paris at 13 and experiencing the culture and wine is amazing. Your niece sounds like she's well on her way to knowing her stuff!

I think it's so cool that you text each other to chat about wine also. I work in the wine industry and my company is trying to help the overwhelmed consumers via the Web, on any mobile device, and via text messaging. We're a food and wine suggestion service (www.hellovino.com) if you'd like to check it out. We love hearing ideas and thoughts...trying to make it the best it can be.

I'm knocked out by a 13 year old using the term "meadowlands" in any context!

There's no doubt in my mind that a lot of talented noses were born that way. :)

Great story about your niece.

I often wonder about this. I LOVE wine. I know when I like or dislike a particular wine. But, I struggle with picking out the smell and flavor components beyond the obvious oak, tannins, acid etc. Sure, I smell berries, but you want me to differentiate between strawberries, raspberries, blackberries...... And who has really ever tasted gooseberries? And don’t get me started on cassis and minerality!

My wife, on the other hand, while not as much of a wine lover as I, can reel off tasting notes like there’s no tomorrow, all spot-on. Sure, she’s a writer, so her overall descriptive talent comes into play. But how is she picking out all those components?

Is it DNA or experience? Super-tasters, super-smellers, or super-describers? Reminds me of tales of Eskimos and their myriad words for types of snow the rest of us cannot differentiate.

Deb, I think you are being a little hard on your self. I know it is only a figure of speech "put me to shame" but as far as I am concerned it is passion and love for wine that counts. You have both. Did a tasting of 8 BBQ reds last night here at my house with my panel ( for my wine newsletter). Six people and it never ceases to amaze me how they can all describe different aromas many of which I cannot detect. The fruit of the vine is a great gift and was always meant and still is, to be enjoyed to the fullest and not to over analyze and agonize about. And yes of course the ability to smell can be learned but basically it is genetic.

Great question. We always have Ann Noble's aroma wheel out at the tasting room and this definitely helps people identify flavors. Just suggesting 'chocolate' for instance helps people discover that aroma in the wine. So my vote is that education/experience is more important than DNA. But I also think that the younger you are, the more sensitive you are to nuances. Just a hunch.

I mean, I have to think there was a *reason* I was born with this schnoz! :)

My mother can't tell the difference between claret and petrol. My father might once have had a decent palate, but two bottles of vodka a day for 30 years has put rather a dent in it, so totally unknown what my genetic predisposition is!

My now 5 year old says she can smell ribena (blackcurrants) whenever I put a glass of red wine under her nose. I think she does it just to amuse me.

In contrast my 8 year old is fond of saying he can smell vegemite (like marmite and quite yeasty in scent). Again it is his blanket answer, and done just to humour me!

My 5 year old always asks to smell the wine we're tasting and drinking. Often he says smells like wine (that's his dad's pat answer) but other times he'll have a more imaginative response. I'll put the next one up on facebook! He's still learning the name sof things and isn't that big into fruits and vegies which puts him at a disadvantage but he loves to smell EVERYTHING just like his mom...who has been teased her whole life for having such a strong and precise nose--like her wine drinking grandfather!

Thanks for the comments, folks. It's interesting to see the varied responses. I'm thinking there's a definite genetic component. When combined with some training, that's your best bet!

Wow! I'm honored you chose my photo for your blog, which I have enjoyed for quite a while. And it's funny that you started the post talking about Davis, my hometown. I'll be sure the lad develops a good nose for wine, which does seem to run in the family. Keep up the excellent blogging.
http://www.flickr.com/bhollar